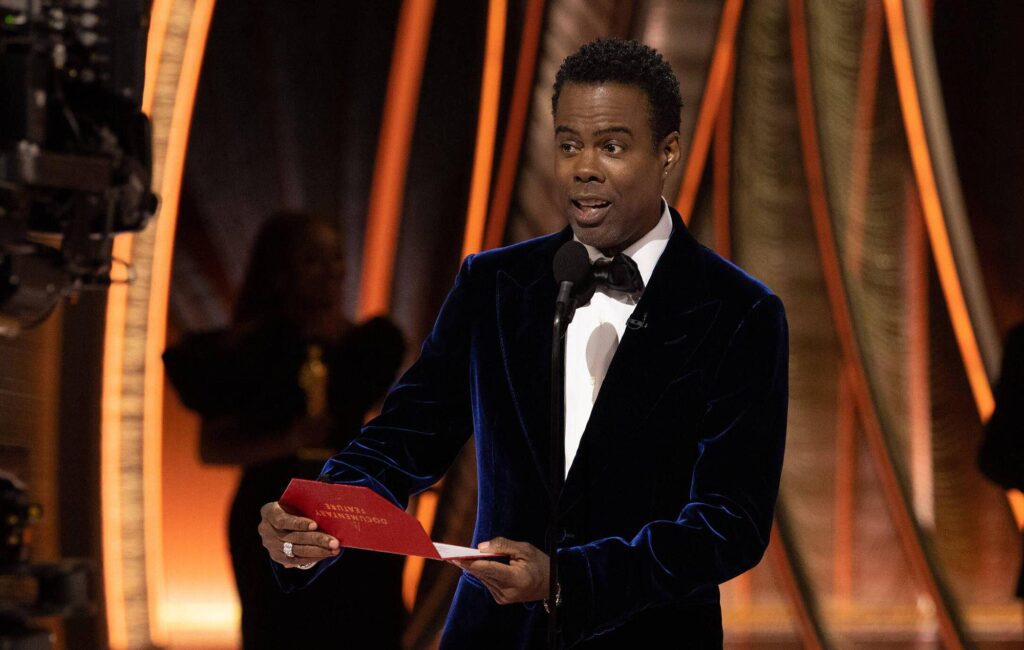 New footage of Chris Rock reeling from Will Smith slapping him onstage at the 2022 Oscars on Sunday (March 27) has emerged online.

Smith took offence to a joke that Rock made about his wife, Jada Pinkett Smith, while he was presenting an award. He said, “Jada, I love you. GI Jane 2, can’t wait to see you,” in reference to her shaved hairdo which was seemingly cropped short due to her alopecia.

After initially appearing to laugh at the joke, Smith walked onto the stage and slapped Rock across the face. Once he had returned to his seat, he shouted at the comedian: “Keep my wife’s name out your fucking mouth.”

Later on in the ceremony Smith became emotional during his acceptance speech for Best Actor (King Richard), seemingly justifying his violent actions for “love”.

imagine you are slapped and there is violence in front of 50 million people , it is deserve it ? #chrisrock #willsmith #oscars #foryou #jadapinkettsmith

In new footage following the aftermath of the slap where Rock presented Summer Of Soul with the Best Documentary Feature award, he is seen looking bemused and at one point shrugs towards someone in the crowd.

Smith initially apologised to the Academy and those watching the ceremony, however, he did not directly say sorry to Rock.

He has since done so, with Rock saying yesterday (March 30) at his first stand-up show since the incident that he was “still processing” what happened. The Oscars has launched a formal review into the incident while condemning Smith’s actions.

Meanwhile, Summer Of Soul producer Joseph Patel has said that Smith “robbed” Questlove of his winning moment at the 94th Academy Awards.

Today (March 31) Joseph Patel posted a thread on Twitter to share “some thoughts and feelings on what happened”, adding that he’s “still sort of processing” everything.

“I think what Will did was selfish,” he continued. “It robbed the category of its moment. It robbed the other excellent and amazing films of their moment to be acknowledged in what was a STRONG year for docs.

“And it robbed Summer Of Soul and our team of our moment. Of a loud, enthusiastic cheer for a celebrated film.”

Read up on the history of Oscars controversies here.