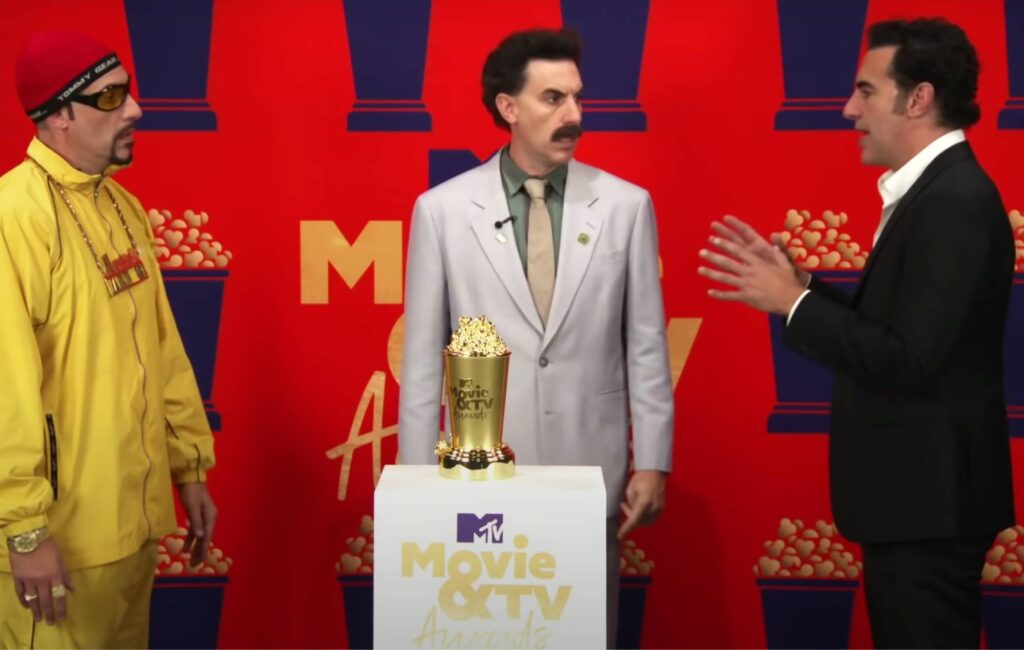 Sacha Baron Cohen has revived Ali G, Borat and Bruno once more to collect a coveted gong at the MTV Movie & TV Awards.

The Borat Subsequent Moviefilm star, received the 2021 Comedic Genius Award during Sunday night’s ceremony, joining past recipients such as Will Ferrell and Melissa McCarthy.

The chameleon comedy star first transformed into Borat to accept the award, which was presented by Seth Rogen.

“Thank you Prince Harry. I’m very excited to be on this brand new music television channel,” he said.

“I’m very happy to be accepting this cup of gold teeth instead of Sacha Baron Cohen and will put it in our national museum along with other treasure we have confiscated from jews.”

But Borat was then interrupted by an appearance from the King of Staines himself, Ali G.

“We should be accepting this award not you. I was the original gangster. The OG,” said Ali G.

As the two characters traded a selection of comic barbs, it was up to the real Cohen to step in and accept the award himself.

“Thank you MTV. To the millions of fans out there who voted for me, I salute you,” the actor and comedian said. “This is yours, I’d be nothing without you. I’m so humbled by this. I’m just a human being creating complex nuanced characters.”

As Cohen finally got his moment to shine, he was then interrupted by Bruno – with the Austrian character dishing out some typically risque gags.

In a three-star review of 2020’s ‘Borat 2’, NME wrote: “Borat’s return, then, is for the fans. Those who still wail ‘Is nice!’ when clinking pint glasses in the pub. The kind of person who might wear a mankini to a music festival. That guy in school who shouted ‘Wa wa wee wa!’ every time he found a penny on the playground. There’s nothing wrong with that, but many will have been expecting more.”