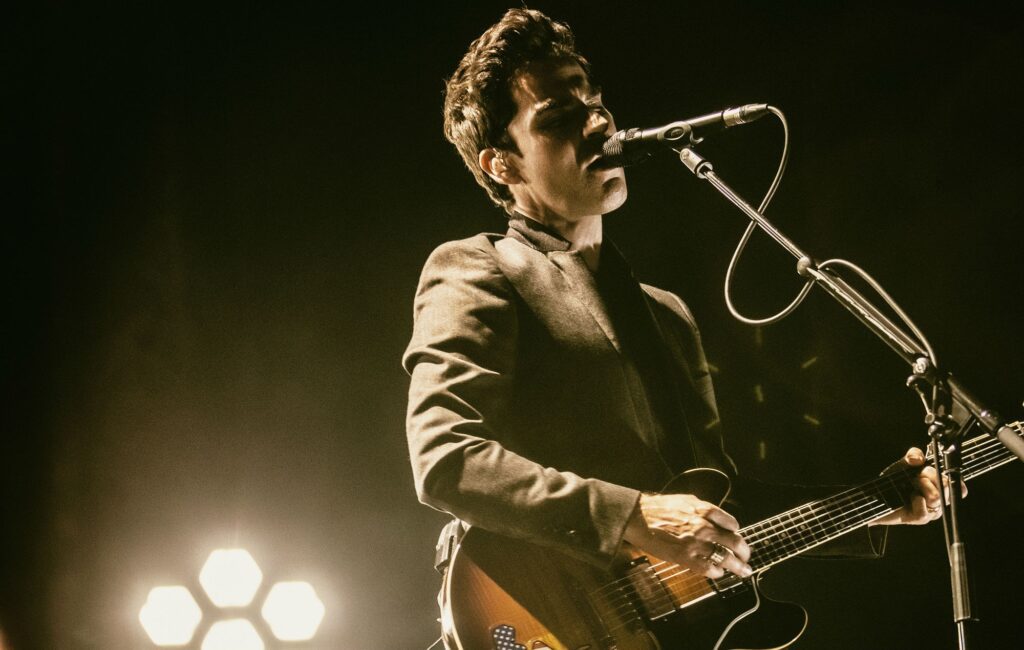 Stereophonics frontman Kelly Jones has shared a clip from his new film Don’t Let The Devil Take Another Day, as well as revealing the trauma behind the band’s album last year and his solo tour.

In the new tour documentary Don’t Let The Devil Take Another Day, accompanying a live solo album of the same name, Kelly reveals he had throat surgery on a vocal polyp – which could have left him unable to sing ever again. The film follows Jones on the tour of that dramatic period

See a new clip exclusively on NME below, in which the singer talks about the band’s experience of supporting David Bowie, and check out our interview with Jones sharing his fears about recovery, how it’s led to him doing more collaborations and plans for a celebration of Stereophonics’ landmark anniversary.

Hello Kelly. Why did you wait until now to go public with your throat surgery?

“I didn’t want it to put additional pressure on the tour, or on the Stereophonics album ‘Kind’ that we made once my voice returned. I hadn’t intended putting the surgery in the documentary, to be honest. The director, Ben Lowe, wanted to film the tour before knowing I’d had the operation. The plan was to film the tour on one camera, to give it the same intimate feel as the classic tour film The Last Waltz about The Band. Then Ben overheard someone ask me ‘What are you going to do about the footage of your throat surgery?’ Ben said ‘Er, don’t you think we should include that…?’ I’d have been happy if people never knew I’d had surgery, but I could trust Ben that he’d sensitively show what happened.”

How worried were you that your voice would never recover?

“I was told before surgery that there was a good chance that I’d recover. From that point, it became mostly psychological. I felt like a dancer who’d broken their ankle – once you know you can recover, it’s whether you’ve got the confidence to do what it takes to get back into it. I was guilty of rushing back, trying too hard to prove I was fine. I was trying to sing ‘A Thousand Trees’ with my voice coach at 9am, and I hadn’t sung ‘A Thousand Trees’ at 9am since I was 21. I was fortunate the polyp wasn’t bad enough for me to seriously think ‘What am I going to do if I can’t sing again?’ But it did make me think about what else I can do as a singer.”

Has your singing changed since surgery?

“My voice coach, Joshua Alumu, says it’s stronger than ever and he might be right. I’ve always taken my voice seriously and tried to look after it, and that’s been especially true over the past couple of years. Getting older, you’re aware of your voice changing in certain ways and that it needs more care. It used to be that I’d just sing Otis Redding, have a shot of vodka and walk straight on stage. You can hear on the album how my voice is maturing, which I’m really happy about.”

In the film, we see you making music with tour support duo, The Wind And The Wave. What’s happening with that?

“We’re calling ourselves Far From Saints and there’ll be some songs coming out next year. They’re from Texas, and promoting an album when you’re on different continents is obviously hard right now, so we’re not sure what to do about the album. It was brilliant working with them. I’d wanted to do a record with a female singer for some time and it was a different dynamic for my songwriting. It unlocked a new style in me and it’s the easiest album I’ve ever made.”

Is this the start of more collaborations from you?

“Totally. Before I had the problem with my throat, I’d got back from a Stereophonics tour and thought I wanted to stop altogether. That didn’t last long, but I wanted new challenges. What I don’t want is the same intensive world tours I’ve done for 22 years. Stereophonics will always be my first love but, if you think of a pie chart, the band takes up too much space. I’m not going to start writing songs for random pop stars, but I’m looking to work with more people. Just this week, I’ve been talking about making music with Neil Cowley, a great jazz pianist.”

How do the other members of Stereophonics feel about you branching out?

“They’re totally cool. Jamie (Morrison), our drummer, is working with loads of different people again and (bassist) Richard (Jones) is doing a record on his own. We’ve always tried to make a different record from the one before, and getting new experiences can only help us. We’ll be looking back on the past next year, though – there’s going to be a 25th anniversary compilation and film at the end of 2021. Between that, Far From Saints, writing with Neil and also doing more songs with Stereophonics producer Jim Lowe, there’s a lot going on.”

After your solo tour, Stereophonics toured in 2020. How do you view the controversy of finishing the tour the night before lockdown?

“I can only say that we followed the government health guidelines at the time every step of the way. Every day, we were asking ‘Is it safe?’ and watching Boris Johnson’s briefings. The advice was that it was safe to keep going. Of course, we didn’t want to put anyone’s health or safety at risk. The tour finished in Cardiff on the Saturday. My parents, in their 70s, were there. My four-year-old daughter was there. What confused things, I think, is that the Premier League and rugby got cancelled on the Thursday. But we weren’t the only artists to play that Saturday – Lewis Capaldi did, a lot of comedians and other entertainers did. I didn’t learn about the social media comments for a week or two, as I’d stayed in Cardiff with my family and focused on coping with lockdown.”

The live album starts with a five-minute story about your childhood before the first song. What was the thinking behind that?

“I wanted to let people know it’s not a regular live album. I’m aware people will come expecting me to get straight to it with a big song like ‘Pick A Part That’s New’ and that it’ll be acoustic hits for the rest of it. But I wanted the tour to be a chance to tell stories about my songs and my life. I was nervous, not knowing what to expect from each audience, but every night being so different from the show before was what made it so special. I loved it.”

How much are you missing playing live?

“Having said I don’t want long world tours, I am missing it. The reality is, I don’t think anything will happen on a large scale until the end of 2021 at the earliest. Even if we get a vaccine, I think people will be too fearful for some time to risk large gatherings at arenas and festivals. As a performer, I try not to think about the risks. We played in New York not long after 9/11, in Paris after the Bataclan attack, at Manchester Arena after the bomb there. It’s my job to give people entertainment; to help them forget about the bad times for a couple of hours.”

Jones’ album ‘Don’t Let The Devil Take Another Day’ is out now on Parlophone. The film of the same name is in cinemas from December 11, with a global online premiere on December 18. See www.dontletthedeviltakeanotherdayfilm.com for tickets.