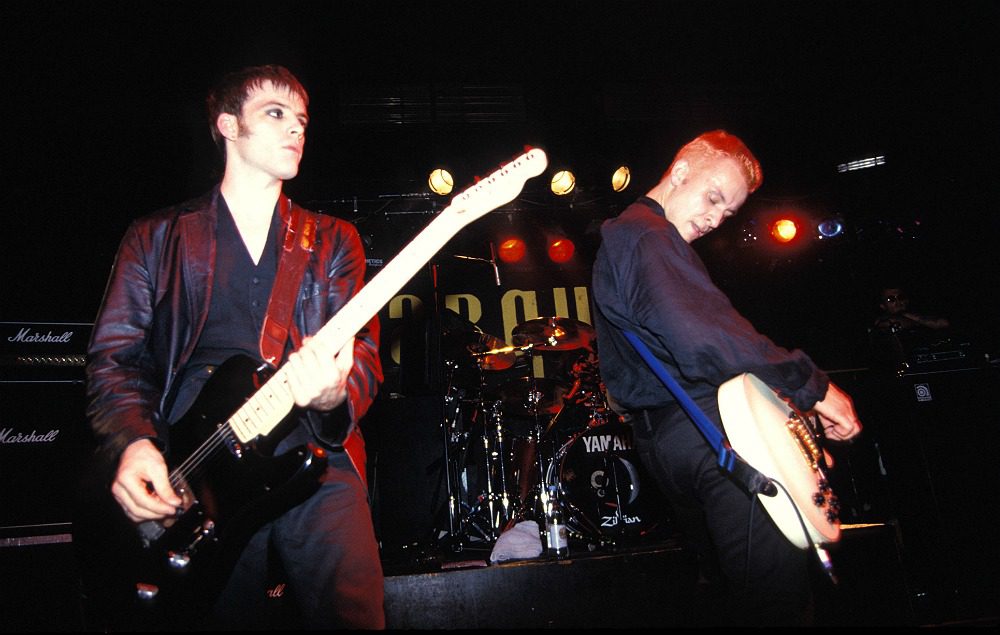 Manic Street Preachers have shared the trailer for their new concert film ‘Pieces Of Sleep’. See it first on NME below, along with our interview with director Kieran Evans.

To celebrate the recent reissue of their second album ‘Gold Against The Soul’, the band will soon be releasing a concert movie from the era filmed on their 1993 tour of Japan. The film will be released on Youtube tomorrow, and is the latest to be made with the band’s longtime collaborator and BAFTA-winning director Kieran Evans – who also directed their acclaimed Be Pure, Be Vigilant Behave capturing of their ‘Holy Bible’ anniversary tour, and films to celebrate their classic albums ‘Everything Must Go’, ‘This Is My Truth Tell Me Yours‘ and ‘Generation Terrorists’.

“This new one started with Wire giving me a plastic bag of old DVDs and VHS tapes, featuring all of the rushes from their Japanese tour in 1993,” Evans told NME. “I had a little rummage around and found loads of live footage. There was a rawness and an immediacy to the performances and the crowd. It was Manicmania. It reminded of the no-holds barred energy of the early days of the Manics were people really lost themselves to them.

“A few of these Japanese kids in the film are seriously losing it. I was actually quite worried about them!”

Piecing together some never-seen-before footage from the band’s eight dates on their ’93 tour as well as backstage and interview clips, the film is fictionally narrated in the style of one of the many hardcore fans that followed the band around on the tour. Evans said that this all adds up to create a very “DIY intensity”.

“It’s very reflective of the times,” said Evans. “We deliberately chose to use just the camcorder footage and sound. If we were to overdub it, you’d lose the energy and sense of being there. The footage makes you really feel like you’re part of the crowd. It fucks with everything you’ve been taught about the hi-def everything of today.

“I recently went on a Japanese tour with the band and was just struck by the loyalty of the fans. I love how people write in that reflective Japanese style with minimal dialogue in the style of Beat Tekashi. I started writing a weird diary that could link the clips together, rather than just crashing from one performance to another. It’s laced with melancholy and the idea of trying to hold on to memories that are slowly disappearing.”

Asked about what it captures of the spirit of the band at the time, Evans replied: “You can see that they were very much enjoying it. Even though they didn’t sell 16million copies of ‘Generation Terrorists’ and split up straight away like they promised, they were still committed to a cause. You can see that they still loved being a band. Nothing was holding them back – especially on stage. There was plenty of life left in them. In James’ performance, you can see him leaning towards the style of ‘The Holy Bible’ with ‘Faster’ waiting to burst out him.”

Evans also admitted that there was a “sadness and responsibility” that came with handling never-before-seen footage of guitarist and lyricist Richey Edwards, who disappeared in 1995 and has since been legally declared dead.

“The sadness obviously comes from watching Richey perform and seeing him offstage behind the scenes, knowing what you know with him not being here now,” Evans told NME. “It reminds you about the gap and the hole in the band, as well as his contribution.”

He added: “It was really something to go through it all and see Richey for the first time in a long time. It took me a while to deal with that really because I was dealing with footage of him that had never been seen before and I felt like there was a responsibility on my shoulders to portray him in a sympathetic way. Just watching them as a four-piece and seeing Richey on the left-hand side as quite a visceral part of it all is amazing.”

Manic Street Preachers’ reissue of ‘Gold Against The Soul’ is out now. They are currently set to play two free shows for the NHS in Cardiff this December.

The Manics also revealed they’re working on the follow-up to 2018’s acclaimed ‘Resistance Is Futile‘ with bassist Nicky Wire telling NME that the record was sounding “expansive” and would be due in 2021, while frontman James Dean Bradfield prepares to release a solo album this summer.

Next year, the band also have stadium support shows booked with The Killers before heading to Scandinavia with Green Day.