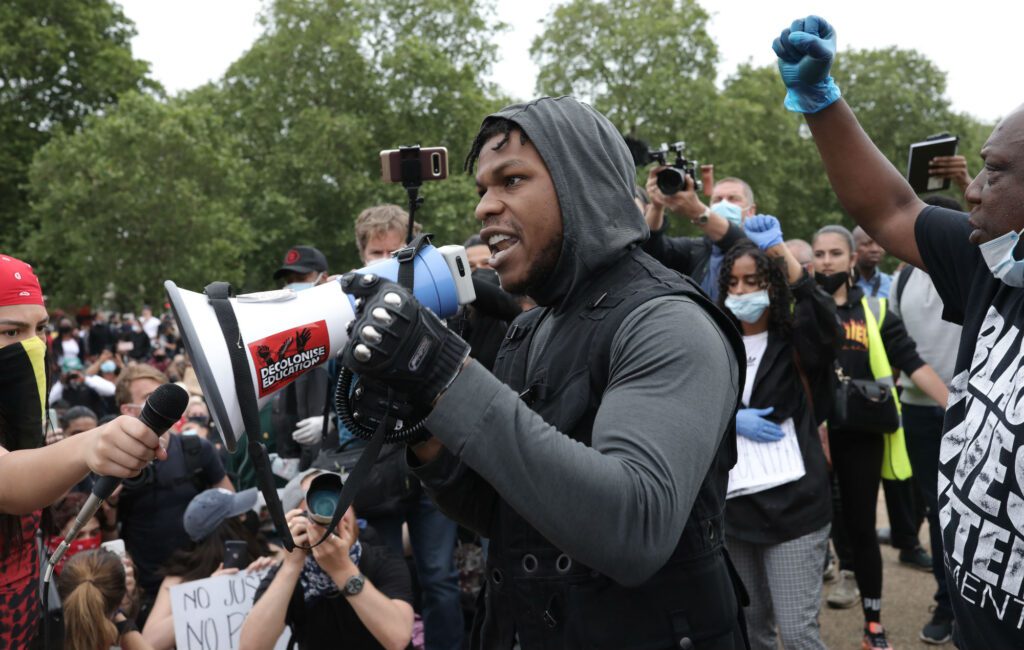 John Boyega has addressed a huge crowd at a Black Lives Matter protest that is currently taking place in central London — you can watch footage of his speech below.

Today’s event (June 3) has been organised as part of a day of action against discrimination following widespread protests in the US and across the world over the death of George Floyd while in police custody in Minneapolis last week (May 25). Former police officer Derek Chauvin has been charged with third-degree murder and manslaughter.

The Evening Standard reports that thousands of people are in attendance at this afternoon’s planned peaceful protest which began in Hyde Park, with many chanting George Floyd’s name and carrying signs bearing his name.

A number of protesters are also honouring the memory of Belly Mujinga, the railway worker who died in April after contracting coronavirus. British Transport Police announced last week that they had concluded that Mujinga’s death “was not a consequence” of an incident in March where she was assaulted by a man who spat at her after claiming to have coronavirus.

“No justice, no peace.” #BlackLivesMatter protesters are gathering in Hyde Park. pic.twitter.com/jDXe2uEAAO

There’s easily hundreds of people already heading into Hyde Park for the start of the #BLMLDN protest this afternoon. Many carrying Black Lives Matter signs and placards @LBC pic.twitter.com/8q4Efrncze

Star Wars actor Boyega addressed those who had gathered for this afternoon’s protest, which began at 1PM.

Boyega also told protesters that he was “speaking to you from my heart”, adding: “Look, I don’t know if I’m going to have a career after this, but fuck that.”

Boyega told his fellow protesters to keep their demonstrations “as peaceful as possible,” adding: “They want us to mess up, they want us to be disorganised — but not today.”

A number of other guest speakers, including relatives of Belly Mujinga, are set to address the protest throughout the day.

tearful and harrowing speech from a relative of Belly Mujinga who thanks everyone for coming and pleads for justice. “justice for belly, she doesn’t deserve this” pic.twitter.com/MFyLzEc6ME

Many attendees at the Hyde Park protest are wearing face masks due to the ongoing coronavirus pandemic. The Standard reports that the organisers of the protest have been attempting to enforce social distancing guidelines, while they are also handing out masks and gloves to protesters.

Speaking to the Standard, organiser Naomi Smith said: “It’s important that we do this in London to show solidarity. We will keep to the social distance rules and this is a peaceful demonstration.”

A growing number of names from across the worlds of music and entertainment have publicly called for justice for George Floyd following his death last week. The likes of Ariana Grande, Ice Cube and Snoop Dogg also called on Americans to vote in yesterday’s presidential primaries (June 2).