A$AP Rocky on the Will Smith Oscars slap: “He emasculated another black man” 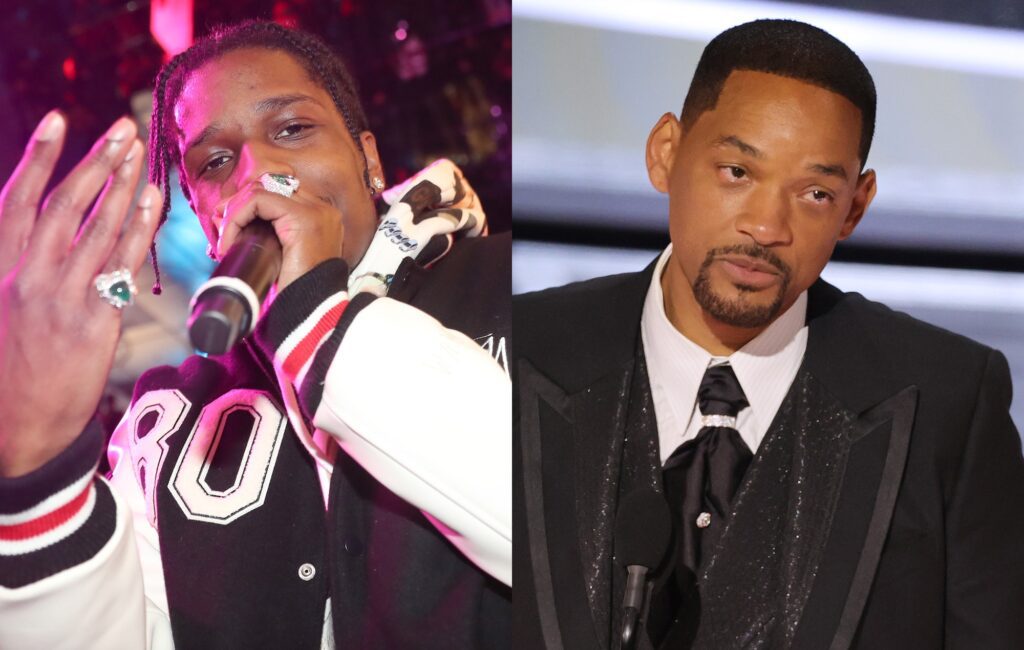 A$AP Rocky (aka Rakim Mayers) has weighed in on the row between Chris Rock and Will Smith at this year’s Oscars ceremony, where after Rock made a joke about Smith’s wife, Jada Pinkett Smith, being bald, Smith walked up to the stage and slapped Rock.

The joke in question saw Rock – midway through a monologue he gave in presenting the Oscar for Best Documentary Feature – point to Jada (who has long been vocal about her struggles with alopecia) and quip: “G.I. Jane 2, can’t wait to see it!” Smith later said in a statement, in which he also formally apologised to Rock, that the joke “was too much for me to bear”.

In a forthcoming episode of the Drink Champs podcast, Mayers chimed in to offer the theory that Smith’s assault on Rock was the result of “some built-up shit that probably wasn’t really targeted at Chris Rock”, adding that “it just seemed like more than a G.I. Jane joke”.

Prior to offering that speculation, Mayers – who made sure to clarify that he’s “a fan of Will, Jada, Chris, all of them” – shared the opinion that by assaulting Rock during the ceremony, Smith added insult to injury. “I think it’s unfortunate that he emasculated another Black man in front of all them people like that,” Mayers said.

Take a look at a preview of Mayers’ Drink Champs episode below:

Following the incident, Smith’s son Jaden reacted on social media, while a number of other celebrities have also weighed in on the altercation. Among those who’ve given their two cents are Smith’s old Fresh Prince co-star Janet Hubert, The Strokes’ Julian Casablancas, Jim Carrey, Amy Schumer, Zoë Kravitz, Pedro Almodóvar, Rishi Sunak and Morrissey, as well as Smith’s mum, Carolyn, and Jada Pinkett Smith herself.

Questlove, whose film Summer Of Soul was announced as Best Documentary by Rock in the aftermath of the slap, also responded to the incident, revealing that he had missed the moment because he was meditating. Yesterday, the musician urged fans to “stop talking about” the incident. Joseph Patel, who produced Summer Of Soul, has opined that Smith “robbed” Questlove of his winning moment at the Oscars.

Yesterday (April 1), Smith announced that he’d resigned from The Academy Of Motion Picture Arts & Sciences, and “will fully accept any and all consequences for my conduct”. He said in a statement: “I betrayed the trust of the Academy. I deprived other nominees and winners of their opportunity to celebrate and be celebrated for their extraordinary work. I am heartbroken.

“I want to put the focus back on those who deserve attention for their achievements and allow the Academy to get back to the incredible work it does to support creativity and artistry in film… Change takes time and I am committed to doing the work to ensure that I never again allow violence to overtake reason.”

It came after The Academy revealed, a day after the Oscars, that it had “officially started a formal review around the [slapping] incident and will explore further action and consequences”. Earlier this week, the board confirmed it had since escalated its review and had “initiated disciplinary proceedings against Mr Smith for violations of the Academy’s Standards of Conduct”, which may lead to “suspension, expulsion, or other sanctions”.

Rock broke his own silence on Wednesday (March 30), telling fans at his first live performance since the incident that he was “still kind of processing what happened”. The LAPD has confirmed that Rock is not pressing charges against Smith; Oscars producer Will Packer said they were “prepared” to arrest him after the assault, but Rock prevented them from doing so.

Meanwhile, it was confirmed recently that Mayers is expecting his first child with Rihanna.