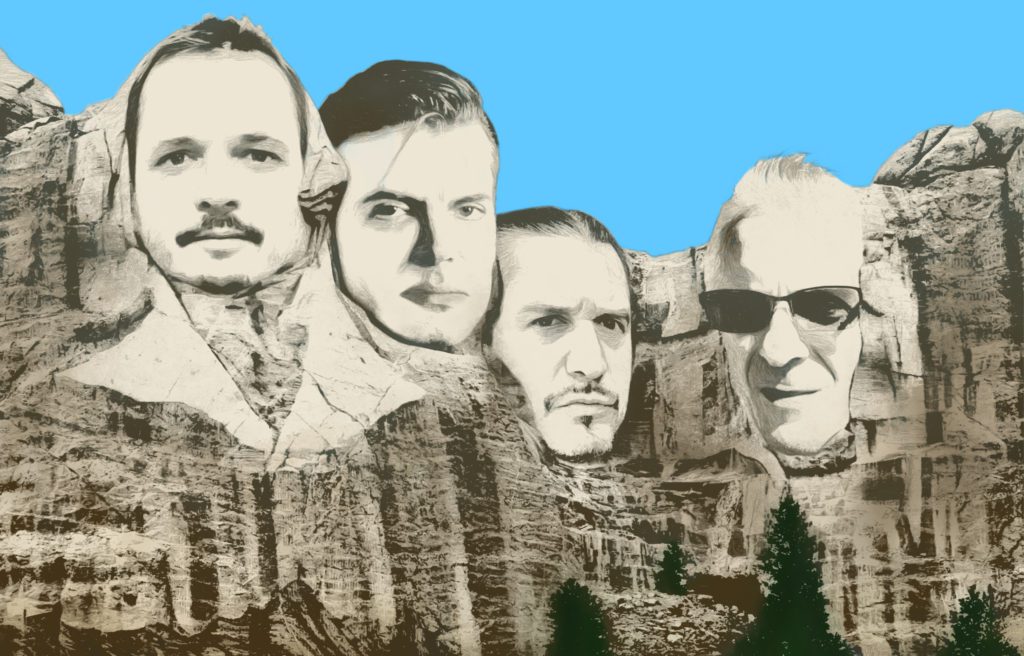 Mike Patton uses those words a lot during our interview, according to the transcription software that parsed our mid-March phone chat.

And somewhere within those words is the genesis of the intense, stunning and diverse 12-song Tomahawk LP Tonic Immobility, which arrives eight years after 2013’s Oddfellows. The band, featuring Duane Denison (The Jesus Lizard/Unsemble), Trevor Dunn (Mr. Bungle/Fantômas), Patton (Faith No More/Mr. Bungle, etc.) and John Stanier (Helmet/Battles), is not the primary lineup for any of its members, but the music has a primacy that belies that status.

It might have been only five or so years between albums, however, “it just took me a minute to like, really get into the music,” Patton says from his San Francisco home. Despite the pandemic, Patton had a busy 2020, releasing The Raging Wrath of the Easter Bunny Demo with Mr. Bungle. Plus, he’s got Faith No More and a plethora of projects always looming.

“Literally, I’m talking about like three years ago they recorded the Tomahawk music,” he continues. “I was busy with other stuff, blah, blah, blah. So I kind of put Tomahawk on the back burner, which was at the moment, probably a mistake. But in hindsight, it was the right thing to do, Because it came out the way we wanted to. I mean, like it came out good.”

Tomahawk’s delightfully off-kilter punky creation is a welcome wake-up call, best experienced, Patton says, listening in headphones, to catch the drone-y-whispery moments as well as enhance the intense musicality. Patton tackles disparate lyrical topics, from his birthplace (“Eureka”) to the self-explanatory “Doomsday Fatigue.” “The phrase is just something I thought of while watching too much CNN,” Patton says. “Yeah, Too much [TV]. Especially during the early days of the crisis. I literally would wake up, turn on CNN and just watch the shit,” the frontman says. “Then I felt myself having a hard time getting off the couch and doing shit.”

Guitarist/co-founder Denison, Dunn and Stainer recorded the tunes that would become Tonic Immobility a few years ago. And the LP aurally showcases the band’s shared film fandom. “We’ve always tried to do it — we even called it ‘cinematic’ rock’ — where you have a certain amount of atmosphere and dynamics and sort of built-in drama,” Denison says over the phone from his Nashville home.

Some of Tonic Immobility is distinctly soundtracky and cinematic. “I did a little bit of [film music work] on a very indie level back in Chicago in the ‘90s, and Mike has done it a few times [most recently scoring the 2017 Stephen King movie 1922],” Denison adds. “If there’s one thing we all have in common it’s that we love different soundtracks, whether it’s [Ennio] Morricone spaghetti westerns, or ‘70s funk films, or just atmospheric soundscapes. That’s the thing that we all like, and we’ve always kind of alluded to that, and whether people picked up on it or not is up to them.”

In fact, the working title for “Doomsday Fatigue” was “High Noon,” referencing the 1952 Gary Cooper film. “To me, it has this very much the sound of these two desperados meeting in the street or this big showdown,” Denison explains. “Though in the middle of the song, it switches keys, it goes to a nice F major sort of key, and it kind of switches gears temporarily.”

More on the thriller movie tip is the ultra-dynamic, creepy-crawly album opener, “SHHH!” “It starts off mysterious, but not in a gothic sort of horror, reverb-drenched way,” Denison observes. “But very sort of spiky and almost agitated, but in a quiet way, and then it bursts open and then it strips back down. There’s bits of that on the album.” “Eureka” – a city in California where Patton and bassist Dunn grew up (and formed Mr. Bungle) is also the state motto. And it’s now an interlude of a tune that bears close listening. It lives between the songs“Howlie” and “Sidewinder.” Why do those two songs need a bridge?

“Good question,” Patton laughs. “It became a bridge because we didn’t know what to do with it. But there was enough time between [the band] recording it and me doing my part [lyrics/vocals] that there was a different…. I want to say ‘perspective.’ Like, especially for me, because my whole approach to this record was ‘okay. Keep it simple. Keep. It. Fucking. Simple. Don’t orchestrate, don’t add strings and organs and tambourines’ and all that kind of stuff going on.”

There was a moment, Patton says, when the album became almost too simple. The singers remembers that upon first hearing the music the band worked up, “Duane’s writing sounded finished already. I was like, ‘man, this could be an instrumental record.’ They don’t need me in, and I meant it.’” That said, when Patton was eventually ready to dive in, the music evoked themes and lyrics.

“That’s part of my job in this particular band; to create a vibe, create an environment… and the music… I don’t really have to do anything, the music does it… But every song has a little weird, you know, twist and theme to it. And I did it at home in my pajamas.”

For pajama rock, Tonic Immobility is very intense. Even the quieter moments. But given the state of the world, no gigs to showcase that intensity are currently booked. For his part, Patton has been careful and isolated during the pandemic. “Whenever I leave my door, basically, if I don’t have a mask on, I feel naked,” he admits. “Like, almost you know, ‘Wait, where are my pants?’”

While fans have had to wait eight years between records, “back burner” is just the way Tomahawk’s gotta be, due to the busy musical machinations of its members. Initially, Denison wasn’t used to the Tomahawk m.o., which is marked by a lack of regular deadlines for recording or touring. “Like with the Jesus Lizard, that was everybody’s main thing. But I adjusted [to Tomahawk.]” He’s not short of creative outlets, and when it comes to the Jesus Lizard [who reunited in 2017 and toured that year and in 2018]; “we still talk and we’re still exchanging ideas. There’s no telling what will happen with us.”

There’s no telling what will happen with the restart of live music and touring in the U.S., either, but many look to musicians for answers anyway. Patton doesn’t have an ideal solution to alleviate the “doomsday fatigue” many are suffering. “I’m not very good at that sort of thing,” the singer admits. “But I would say: ‘Engage with others.’ Like, call a fucking friend! For a while, I was meeting with a friend on my deck, outside, and we’d have lunch. Or go to a park, walk your dog. That kind of stuff. makes things feel more normal,” Patton believes, “even though they’re not normal. It’s about tricking our minds into getting back to normal. Don’t you think?”