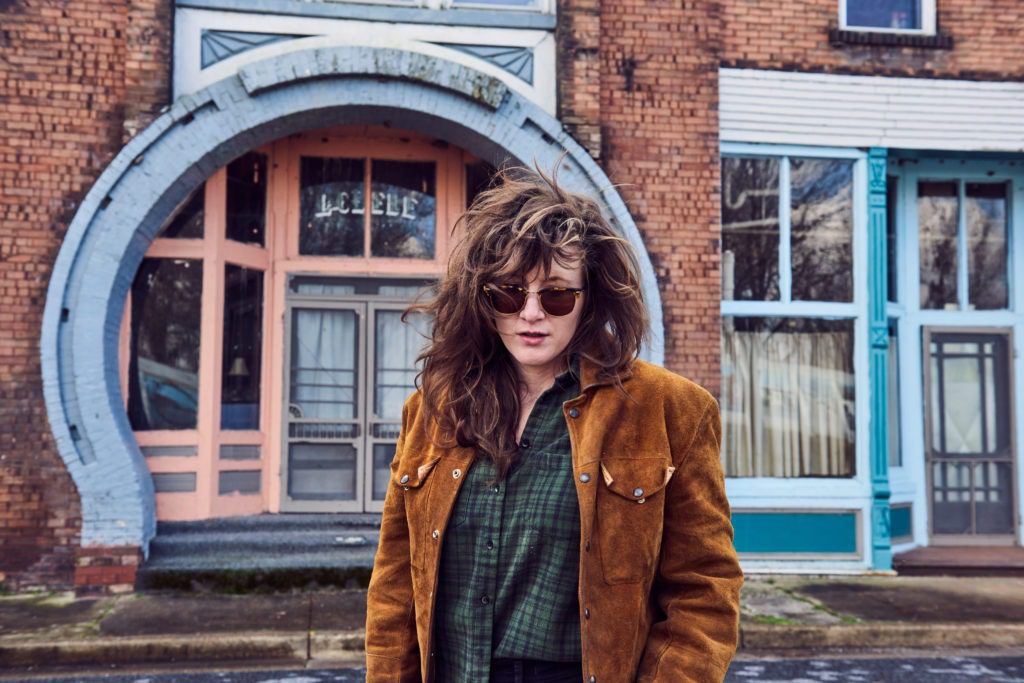 Type ”Murray, Kentucky” into a Google Maps search box, and the jagged edges of what USA Today once called the “Friendliest Small Town in America” come into view. There are two labels. One, predictably, is for Murray State University, a public college in town. The other is simply called “Confederate Monument.”

It’s right there by the courthouse in town, Gen. Robert E. Lee standing sentinel over a porcelain drinking fountain surrounded by columns. It was erected in 1917; things being how they are today, who knows how much longer it will stand.

S.G. Goodman, whose debut album, Old Time Feeling is out July 17, doesn’t specifically write about the monument standing in her town, but her subtexts are pointed straight in its direction. She sings — her voice as soulful as her themes can be challenging — to the monuments of perception, the South that she grew up in and the one she wants it to be. Her every word, evocative as they are of cotton fields and sharecroppers and pecans and rodeos, push back against the grain. “I always feel, when describing the South to people,” she tells SPIN over the phone, “that the South is the soul of the country. And when the soul is sick, the body is sick.

“It was very important for me to represent a side of Kentucky that a lot of people I don’t feel like would associate with this place.” That side fits in more at Murray’s independent record store Terrapin Station, where the 31-year-old Goodman found inspiration in the acts that stopped through on the road from St. Louis to Nashville. “I think for the longest time, Southern music has perpetuated some of the outdated/never-should-have-been-a-rallying-point-to-begin-with message.”

And so, as she aims to tear down a lot of what has long defined Southern music, Goodman does with earned, or at least borrowed credibility. Her goal for her debut album — her previous act, the Savage Radley, released a record in 2017 — was to put together an all-Kentucky team, which led her to My Morning Jacket singer Jim James. The two met while separately contributing to The Pine Mountain Sessions, a compilation by Kentucky artists in support of Kentucky Natural Lands Trust and the Pine Mountain Settlement School. When James heard her contribution to the collection, the song “Red Bird Morning,” he knew that she had a signal that needed boosting. “There was a smoky realism to her voice that reminded me of some of my favorite music, like John Prine or [Bob] Dylan,” James says over email. “It was grounded in reality yet so surreal and mystical. It painted beautiful pictures in my mind.”

Beautiful, yes, but seared by solitude, a church-choir-singing farmer’s daughter from Western Kentucky seeking a community. “Being a queer woman in the south,” Goodman says, “there can be a real sense of isolation from anything to who you’re able to date in your area to what kind of support you have from your community and family. And a lot of times when there’s any sort of traumatic events in your life, with lack of support, you can feel really isolated and alone.” She channeled that pain, that confusion, that breakdown into the album’s leadoff track, “Space & Time.” It’s a song that Goodman feels is simultaneously fit for weddings or funerals. But it’s also a suicide note.

“Space & Time” contains (and presents) Goodman’s truth, but as she sings it now, she recalls what came next, when she slept off a week’s depression on her guitarist’s couch, then realized that her friends had saved her life. James recalls a studio full of musicians and engineers in tears as Goodman laid down the vocals on the track, and how she finished and just ambled into the mixing room as though nothing had happened. She has lived her songs already, but as a listener — of that and the other tracks — you have to be intentionally obtuse not to feel at least a bit heartsick.

Goodman’s Instagram feed is a hybrid of pastoral Southern imagery and impassioned activism on behalf of figures such as Charles Booker, who mounted a strong progressive challenge for the nomination to run against Sen. Mitch McConnell. She writes to those causes, as well, speaking to the coal miners who shouldn’t accept McConnell finally listening to their concerns in six-year election cycles. She believes in a South and a Kentucky that asks questions. That doesn’t accept.

So she doesn’t apologize, much to James’ delight. “She was so kind but also did not give a fuck in the best way,” James says of the first time they talked. He says that the majority of his production notes were just on tempo and drawing out some things that could highlight her unique and lovely voice. But mostly, he insists that he got out of her way. (She pushes back on this compliment, albeit with gratitude.) But James insists that he was overwhelmed and overtaken by Goodman’s authenticity. He is a successful and busy musician (My Morning Jacket actually released its own album just a week before Goodman’s debut is dropping) and he seeks out meaningful collaborators. To him, Goodman was more than a talented artist with a worldly and attractive subdued nature. She was a fighter. That resonated loudly.

“It is the duty of every person to speak up and speak out for what they believe,” James says. “Silence is violence. If you are not a part of the solution you are part of the problem. There never was and there is no longer any room for anyone to not stand up for their fellow human anymore with so much at stake. We are fighting for the soul of all humanity, and in order for love to win, we really have to stand up for each other and speak out against hatred and brutality.

“That’s what I love about S.G. She is not afraid to get real, to speak about issues that are tough for some folks to hear, but that they need to hear. It’s usually the toughest issues that are the ones we need to speak up about. Frankly, I don’t have any respect for anyone who sits in silence and refuses to speak up or help.”

Someday soon, perhaps Goodman and James will get to be present as Gen. Lee’s statue comes down from the courthouse lawn in Murray. Until then, the debut album places her precisely in what she wishes will be a changing Southern music scene, one that proudly celebrates The Highwomen’s self-proclaimed gay country song “If She Ever Leaves Me,” or that might someday soon stop singing about, as she says, “putting gas in your Chevy truck. It will be a song about plugging in your Chevy truck. That’s what’s so cool about music. It’s so telling of the time it was written in.”

So Goodman meets this moment of her long-awaited debut. She has things to say, she has the microphone at least for the moment, and she’s going to get it out, any diktats of album promotion be damned.

“My first record is about to drop. I have less than 3,000 followers on Instagram. What do I have to lose at this point? Do I want to build a platform where I have to sneak in my views later on and try not to upset fans? Or do I feel like there’s a place for me and people that want to accept what I have to say, or will find comfort or some sort of change. I think they’re out there, and I don’t think it would be wise for me to base my career on fans that as of right now don’t exist.”