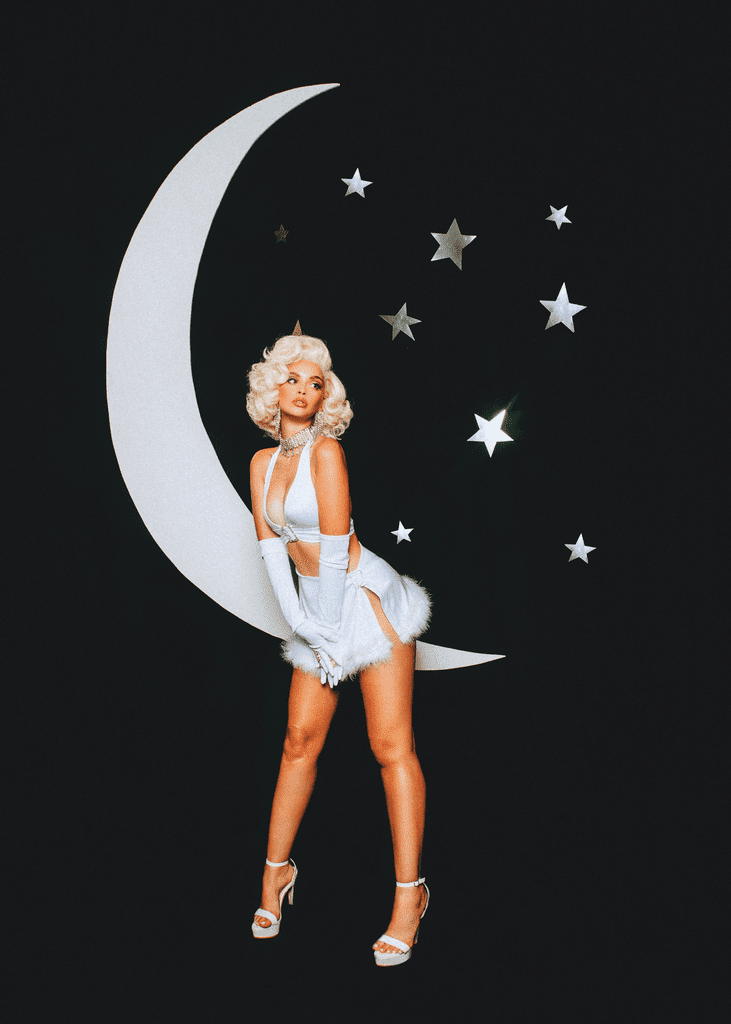 This Christmas, you’ll get to sit around a socially-distanced household and take in the smoothest, sexiest, and most soulful holiday songs that you’ve ever heard thanks to singer Sabrina Claudio. The wistful Miami-born singer whose breakthrough, About Time, was released in 2017, reveals over Zoom that her latest body of work wasn’t planned and was spurred on by a conversation with her manager, Wassim “Sal” Slaiby.

“I was supposed to be on tour and that didn’t happen because of the virus,” she says happily as she reflects on the experience. “I was just completely uninspired and didn’t really want to do anything with music. And he [Sal]  just threw out there, ‘Oh, you know what? You should just release a Christmas song this year, just because,’ and so I took that idea and I ran with it.”

The end result? An album that mixes Christmas classics and originals. Titled Christmas Blues, the collection features Alicia Keys and the Weeknd and is an intimate, midnight hotel rendezvous between Santa Claus and Fran Drescher. Delicate and impossibly dreamy, Claudio glides between classic holiday favorites like “Oh Holy Night” and “Have Yourself a Merry Little Christmas” and original holiday-themed compositions to create a one-of-a-kind Christmas experience: one that you can listen to with your friends and family, but one that can also be played underneath the mistletoe. What made you decide that you wanted to create a Christmas album?
It’s interesting actually, because the whole process was pretty unexpected and unplanned. I was having a conversation with my manager about what we were going to do for the year, because I was supposed to be on tour and that didn’t happen because of the virus. I was just completely uninspired and didn’t really want to do anything with music. And he just threw out there, “Oh, you know what? You should just release a Christmas song this year, just because,” and so I took that idea and I ran with it. I went in, wrote one of the Christmas songs, “Christmas Blues,” and I fell in love with it so much that we ended up just continuing to go back in working on an entire album.

I wrote this album with my songwriter, Nasri, and my producer, Kaveh. Nasri can write Christmas songs for days. I don’t know where he gets all these ideas from, but if it wasn’t for him, I don’t think I would have been able to do it.

How did you incorporate your own Christmas memories and experiences into the album?
I have five original songs and three covers. I did “Oh Holy Night” which is one that I grew up listening to because I was in choir in high school and we would do Christmas concerts and competitions every year. Every time we were able to perform that song, just emotionally, it took me somewhere and it stuck with me all the way up until now. And then the other two, which are “The Christmas Song” and “Have Yourself A Merry Little Christmas,” are ones that I grew up on since I was a kid and they’re super nostalgic to me. So we just incorporated those into the album and made it my own, and it felt really good to do that.

“Warm December” was the first song that you shared from the project. What does that mean to you?
I want to say that it’s probably the sexiest song on the album. It introduces what the feeling and the tone is of the album is as a whole. It really is warm, sultry, and soulful, and a lot of emotion went into making it. Its mood lets people know this is what Sabrina Claudio’s Christmas is like.

It must have been awesome to get the Weeknd and Alicia Keys on a Christmas album. How did they contribute to the mood and feel of Christmas Blues?
Abel is on “Christmas Blues,” which is the first song that I wrote. And it’s funny because that one is my favorite and has always been since the beginning. And when Abel listened to the album, that was his favorite and both he and Alicia bring this emotion that just matches so perfectly along with them being just some of the most influential people in my life and in my journey as an artist.

To have them on a Christmas album that I did out of pure intention, of just wanting to do something that will bring some peace, happiness and/or nostalgia to people, makes it so much more important and I’m way more honored than I would have been in any other album. They’re icons and legends with instantly recognizable voices and they brought so many emotions to the tracks that they’re featured on. What’s your favorite Christmas song?
It’s one of the three that I chose. It’s hard to pick just because they all have some sort of special sentiment behind them. But I would probably have to say maybe “The Christmas Song” because I have this memory of me doing this YouTube video with my grandfather and he was playing the guitar and it was singing this very song.

You released Truth Is last year. Have you been working on a follow-up?
For sure. I mean, I made Christmas Blues after experiencing this year. I didn’t really feel comfortable releasing anything that didn’t have a pure meaning behind it, which is why I wanted to do a Christmas album. But of course, I’m going to keep working on music. I will definitely release it. I don’t know exactly what it will be, but I’m going to go back to writing in January on another album hopefully, so that’ll always be in the works.