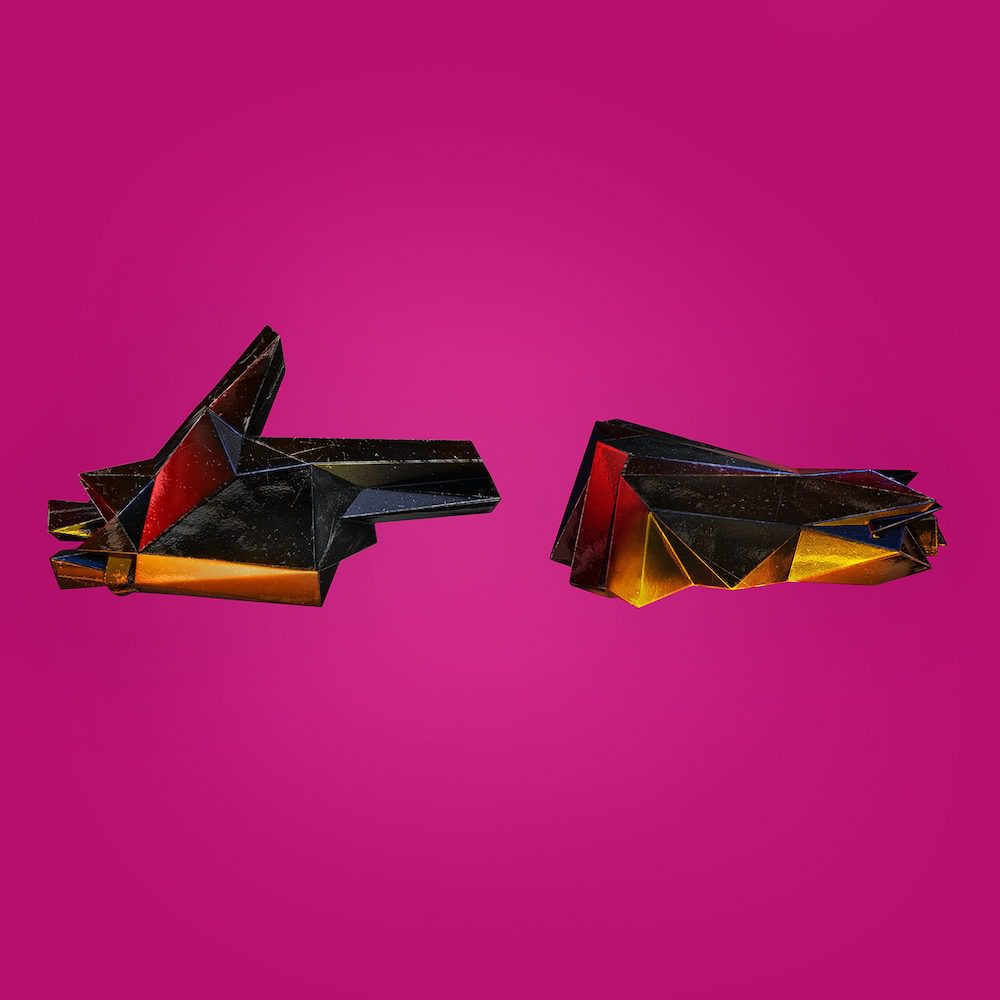 Run the Jewels don’t make a reviewer’s job easy because everything that’s great about them is the stuff we’re supposed to ignore to get to the bottom of the hype. They began as the best kind of “supergroup”: An unlikely pairing of beloved talents who still had plenty of room to peak higher. El-P’s fantastic Fantastic Damage and his countless innovative productions for his own previous, self-built Def Jux universe (Cannibal Ox’s The Cold Vein, Mr. Lif’s I Phantom) were unmistakably the most futuristic squelches in dusty-crate-obsessed indie-rap. Jaime Meline set the stage for dystopian soundscapes in hip-hop more than a decade before Death Grips, Yeezus, or the “mutant” scene that’s spawned Black Dresses and Deli Girls. Then you’ve got Michael Render, d/b/a Killer Mike, a firebrand of an MC with an ATL twang who won a Grammy going lip-for-lip with OutKast on “The Whole World” but spent a couple of major-label lives in search of that perfect producer to give him a Sound. Their unexpected union and its even more unexpected runaway success was just too good.

That’s why it’s been hard to not write Run the Jewels off a small bit for being such a wet dream. Their comic-book-style logo and improbable connections (Yo La Tengo’s James McNew and Zack De La Rocha on the same record?) have elevated them into rap’s favorite superheroes since the Wu-Tang Clan. And their uncanny nose for the zeitgeist has made the bat-signal-like way they appear into a running gag that also smacks of buddy comedy considering the duo’s biracial makeup and rec-room vibe. But it also speaks to how unfortunate it is that they’ve had such “luck” lining up with the national temper.

In 2014, the duo unleashed their unanimously acclaimed, scathingly sardonic breakthrough RTJ2 in the midst of national outcry in Ferguson after Michael Brown was shot dead, and Killer Mike had one of the most poignant speeches after the officer was acquitted. The more sprawling and downcast RTJ3 followed the Christmas after Trump was elected president. And after processing all the cruelty and garbage to ruin any progress this country had made in just four years, all El-P and Killer Mike needed to say their peace was this sub-40-minute shrapnel grenade. You could say that Run the Jewels’ timing has been even better than their consistently good music, until now.

There’s no particular secret to what makes RTJ4 the best Run the Jewels album and one of 2020’s best by anyone. It’s shorter and more acute. The beats on “Ooh La La” and “Walking in the Snow” and “Out of Sight” are sourer and more ratcheted (not to be confused with ratchet) than anything they’d done previously. The clipped pace and eyeroll-y tone recalls Ice-T’s OG: Original Gangster more than any Public Enemy, despite the squealing sax swarm that wells up over the closing “A Few Words for the Firing Squad (Radiation).” Everything is tighter in the sense that these songs feel like they’re in a vise, eyeballs bulging and reporting back through their hoarse mouths. And El-P and Killer Mike really do know enough about superheroes and buddy comedies to make fans’ crossover dreams come true.

They sample Gang of Four’s “Ether” and Gang Starr’s “DWYCK” alike. Not only do they put Mavis Staples and Josh Homme on the same track, but when they try the same trick with Pharrell and De La Rocha, the breeziest Neptune gets in the spirit and drops some Dead Prez-style abolition history himself. (N.E.R.D’s underrated 2017 comeback NO_ONE EVER REALLY DIES is hardly apolitical either.)

But they’ve also cast stronger villains. Rather than bother with Donald Trump, who doesn’t know Adele exists, much less some web-famous agitprop that’s never cracked the top 10 on Billboard’s 200 albums, they join the world’s protest against his enablers: The militarized police America has never outgrown. On the opening “Yankee and the Brave,” their most literal depiction yet of the action flick they pretend they’re in, Mike shoots a cop in the head who “murdered a black child,” and El swoops in with the getaway car because “You still owe me for them Nikes / You do not get to just die” (and because “Fuck with my brother, you get the bastard surprise”). And in the incredible “Walking in the Snow,” Killer Mike unlooses eight bars that must be quoted in full:

They predicting prison population by who scoring the lowest
And usually the lowest scores the poorest and they look like me
And every day on evening news they feed you fear for free
And you so numb you watch the cops choke out a man like me
And ‘til my voice goes from a shriek to whisper, “I can’t breathe”
And you sit there in the house on couch and watch it on TV
The most you give’s a Twitter rant and call it a tragedy
But truly the travesty, you’ve been robbed of your empathy

That was recorded well before George Floyd was choked to death by a sociopath in uniform. Run the Jewels’ first three albums were hardly lacking in empathy. But their defeatism too greatly embodied the rhetoric of last year’s amazing Danny Brown team-up (“Three tears in a bucket, fuck it / I don’t care about nothin’”), and their universal target The Fuckboy was too vague of a stand-in for everything that pissed them off. On RTJ4, they sound charged up with the extra juice of a protestor who senses they’re on the cusp of winning. And suddenly the hype isn’t deafening enough for two 45-year-olds about to reach Billboard’s top ten for the first time with a free gift they bestowed to “listen to while you deal with it all,” because “the world is infested with bullshit.” If that echoes another icon in her 40s who released one of 2020’s best albums, well, that’s just another world waiting to collide with theirs. Don’t forget to donate.