Jonah Ray on His Friendship With "Weird Al" Yankovic 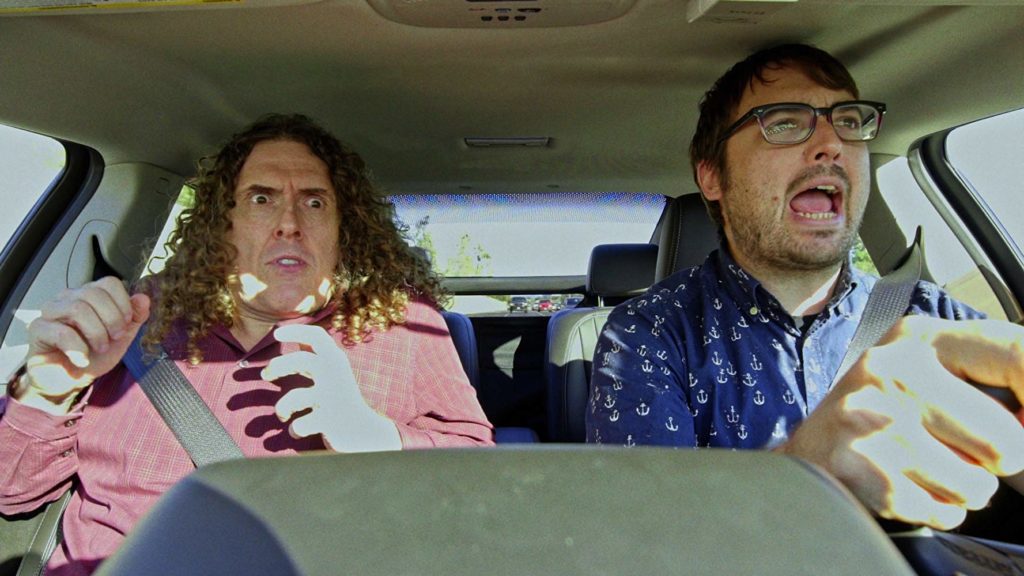 (Like all of Jonah’s articles, there is a corresponding Spotify playlist of all the bands he mentions. Feel free to immerse yourself and listen while reading. Imagine that, a feast for yer eyes and ears at the SAME TIME.)

“Close Personal Friend Of Al” was the name of “Weird Al” Yankovic’s fan club. As a kid who was a fan, I was always very close to sending in my membership application but never did. I was 1.) Afraid of putting effort into something that might get lost in the mail and 2.) I knew it was just a clever name for a fan club and wasn’t an actual invitation to what I REALLY wanted as a kid: to be a close, personal friend of Al.

“Weird Al” never played a show where I grew up and I was slightly insulted as he wore “Hawaiian” shirts but never played Hawaii. If he had played, would I have become friends with him then? A gawky teenager wearing his Garth from Wayne’s World glasses and a Screeching Weasel shirt that’s a size too small? Is that something he would have thought “Close Personal Friend Worthy?”

The first time I saw him was in 1999 at the Sacramento County Fair. I was visiting people in Lake Tahoe and when I found out he was playing somewhat nearby, I hitched a ride with the crew from the MAD ABOUT MUSIC record store up. It was Dave Mello (formerly of OPERATION IVY & SCHLONG), Boyde Wenger (formally of Las Vegas’ BOBA FETT YOUTH) and Travis T. Retina (from Plaid Retina of course.) The show was incredible and when I saw a bunch of kids rush to the side of the stage, spatulas in hand, I thought…no…I’m not gonna go and meet him this way.

Two years later, I’m at a secret Ben Folds show at ALL STAR LANES in Los Angeles. Ben is doing this show to promote his debut solo record ROCKING THE SUBURBS. It’s a killer set and gets even more killer…er when they start to play the intro to “SONG FOR THE DUMPED” one of my favorite Ben Folds Five songs off of “Whatever and Ever, Amen.” He yells into the mic “Hope you don’t mind. But we gotta guest singer for this one…” Somebody saunters into the “stage area” (there wasn’t really a stage). He has long hair over his face and for a second, I’m thinking “Is Chris Cornell about to sing with Ben Folds?”

The man whips his hair back and it’s fucking “WEIRD AL.”

I had only lived in Los Angeles for a month at this point, but remember thinking to myself “I bet this shit happens all the time here. This is the greatest city ever.” After the show, I was leaving with a girl that I had brought that I wanted to make out with. We see Al in the parking lot and she says “Go tell him you’re a big fan!” I said “Nah, let’s just go back to my apartment.” But what I really meant was “Listen, I think you are very cute. I really wanna make out with you tonight. But, if you see me geek out on ‘Weird Al’…well…I have a feeling that will ruin any chance of a smooch sesh.”

Five years later, I’m working the evening shift at Amoeba Records in Hollywood. I was leaning against the counter, mentally counting the minutes ’til I could sneak a beer on my dinner break when all of a sudden, I see Al walk in. By this point, I had started to do comedy and performed with people he knows. I even showed up on TV once at this point. Truly, I can talk to him now. I work at a cool store, I am a semi-professional comedian (hardly) and thirdly, my 15-minute break was coming up. Meaning: I CAN TECHNICALLY GET PAID TO MEET “WEIRD AL.”

I walk up to him, trying to imbue all the confidence of a sassy record store clerk. I feel like this may go well until I squeak out a pathetic “Uh, MR YANKOVIC!?” He turns around with a gigantic smile and says “HI!” Then, I let loose a stream of consciousness rambling of “Hi, my name is Jonah, I’m a really big fan, I do comedy now, so, like, I’m kinda legit, I mean, not really, but I showed up in a Halloween sketch on Jimmy Kimmel Live!, I didn’t get paid but, it was cool, that is to say, I love UHF and I was kind of inspired by you to do what I do now…” 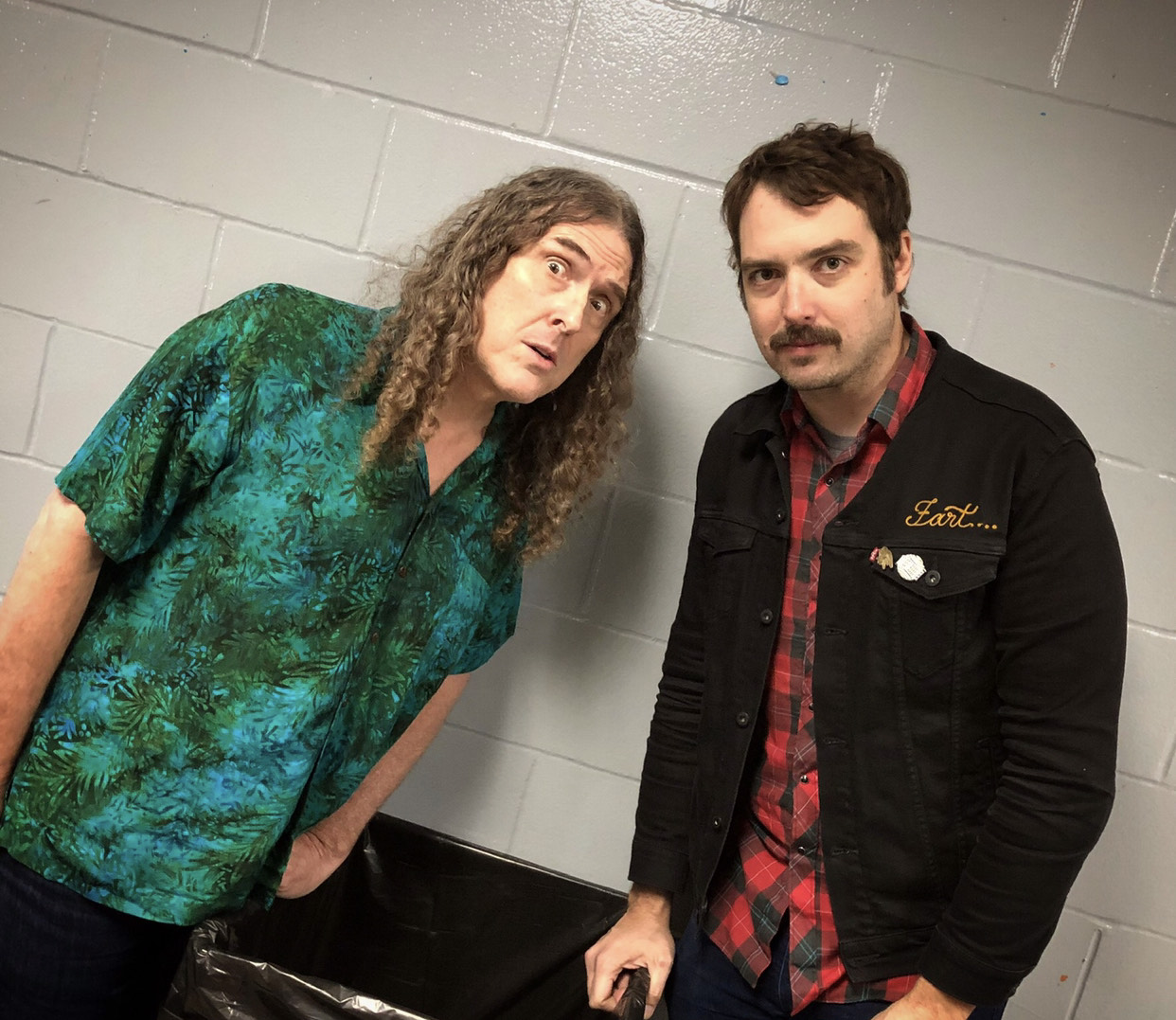 He smiles politely through all of this as we stand in the USED ROCK LP RECENT ARRIVALS then goes “Wow, thanks man. This is my wife Suzanne.” I turn to her and go “hello.” Then turn right back to Al and say “Anyway, I’m on my 15-minute break here so I should get back to work and I just want to say that I even put “FRANK’S 2000″ TV” on mixtapes for girls when I was growing up.” I walk away to a faint “Well, nice to meet ya!”

Sometime later and here and there for the next 12 years, I would work with Al on different projects. Be on his guest list for hometown shows. He did a cameo in my series HIDDEN AMERICA. He sang “DARE TO BE STUPID” on my Comedy Central show THE MELTDOWN WITH JONAH AND KUMAIL. Al would appear on my podcast JONAH RAYDIO. He spread the word about my punk tribute to his songs that I released on Mike Park’s ASIAN MAN RECORDS. I’ve interviewed him for the UHF blu-ray release and now again for SPIN. But, on top of all that. I get a Christmas card from him and his wonderful family every year. Somehow, I’ve become a close personal friend of Al. Who I think is a true artist. A cultural commentator. A satirist. And, as everybody who has ever interacted with him, the nicest and sweetest guy you’ll ever meet.

Sidenote: my apologies to his wife Suzanne for my short “hi” to you at Amoeba that day. I know that has probably happened to you by many a sweaty nerd, but you were and continue to be awesome.