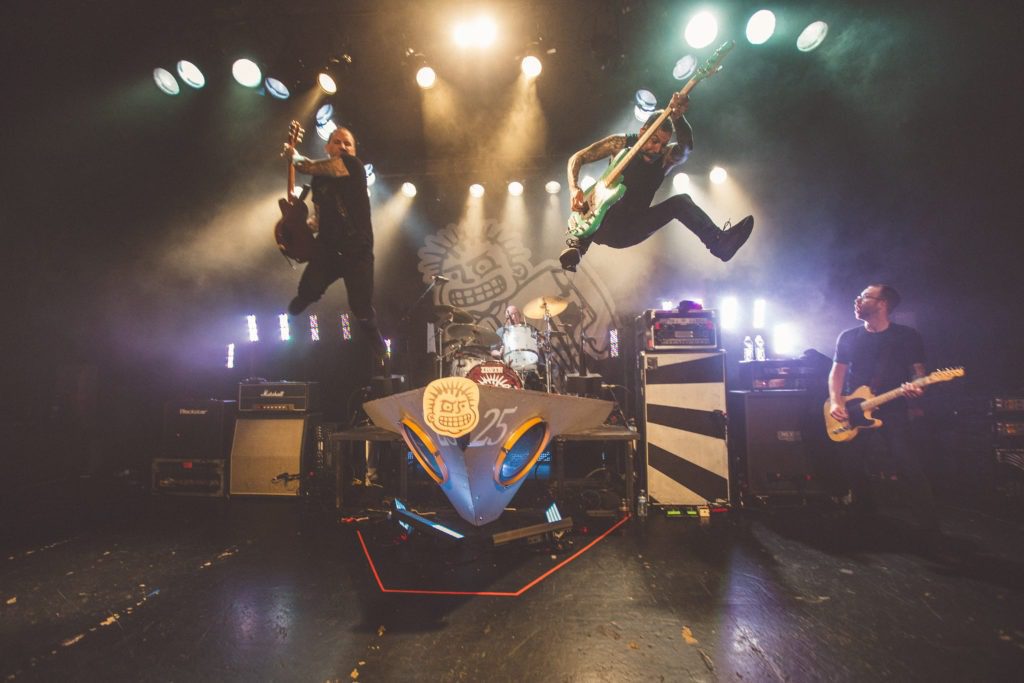 Few punk bands from the ‘90s have adjusted to the new livestream culture as well as MxPx has. As soon as things started shutting down due to the COVID-19 pandemic just over a year ago, frontman Mike Herrera started taking to Facebook Live to perform some acoustic tunes (which eventually became the Life in Quarantine double LP) and chat with fans. Six months later, the now fully independent band launched Between This World and the Next, a ticketed livestream concert series where fans could hear the big hits, deep cuts, and rarities from the band’s near-30-year career.

But the next edition of Between This World and the Next will be a brand new experience for both the band and the fans. In addition to being hosted on SPIN’s Twitch channel on Friday, April 16 at 6:30 pm PT, the show will be free and built around audience interaction. Fans at home will be able to make requests, ask the band questions, and much more, all with the band being able to read and react to them live on the stream.

SPIN spoke with Herrera via Zoom to find out more about the livestream, the band’s massive catalog, and their new single that’s out on the same day. SPIN: One of the cool things about your recent livestreams is that people have been able to listen to “Can’t Keep Waiting” while you’ve been in the process of creating it. What’s that like to be working on a new song live in front of fans?
Mike Herrera: It’s a little weird as an artist to put it out there before it’s even available to listen to because you feel like you might shoot yourself in the foot with the timing of it. Back in the day when we were still in the garage, we’d just go to local shows and play before we had a record, so of course, the songs could change from what people would hear — or they could stay exactly the same. But this is something we haven’t done since then. [“Can’t Keep Waiting”] morphed a little bit as we played it on the livestreams, and people kept asking when it was coming out, so we finally were like “OK, we should probably record this thing.” There was a little urgency to it because there’s a chance that somebody could just take the song and record their version before we ever released it. I mean, we’re not that important, but it could happen.

Seeing as you’ve been touring and releasing music for most of the last three decades, what’s the biggest difference when you’re playing a livestream, like the one this Friday?
Well, this one is going to be kind of crazy, because it’s free for everyone, and we’ll be able to see comments coming in to actually interact with people and take requests just kind of off the cuff. We have a few things planned, but we’ll be interacting with the audience and picking out a bunch of song requests to just keep it rolling. It’s fun, because people put it up on their big-screen TVs or out on their patios and decks if they live in nice weather. I started doing acoustic livestreams right when the pandemic hit, and it was just something that I wanted to do every week just to touch base with everybody, see what was up, and make sure everybody was adjusting to the craziness. We didn’t get to doing live shows for the full band until October 2020, so it took us a long time to figure out all the ins and outs of streaming. Whatever it is about playing live in front of people, and whatever it is that people get from playing live, it does that for us.

In addition to a crazy touring schedule, MxPx had a stretch from the mid-’90s to the end of the 2000s where you put out 10 albums in 15 years. How did you manage to keep that up for so long?
It was a whirlwind, and I feel for bands that still do it. It’s hard because you don’t realize it when you’re just touring, touring, touring, and then your “break” is going into the studio — and then you’re touring again. With Life in General (1996), we recorded in two chunks because we had a tour in between. It turned out great, but I mean how can you do that? If you’re really going to focus on something, you should just focus on that. I think that’s what gets lost. There’s not enough time to percolate. As a songwriter, I’ll have ideas that sometimes hit right away — they talk about “the five-minute song” or “the 10-minute song” that’s your hit song or something, and that does happen. A lot of times you don’t have time for it to percolate and sometimes those ideas aren’t quite fleshed out. After a while, bands just need more time to flesh out ideas, because after you’ve done this song, this song, and this song, how do we make the next song not sound just like what we already did? We have drums, bass, guitar, and vocals for us as a punk band for the most part, and that’s what we’re working with. It takes a little more thought as you get more albums in, or else it just becomes a mishmash of the same ideas over and over.

Absolutely, and it seems like everyone has a different favorite MxPx song or album. What kind of impact does that have on planning a livestream event like this one with a potentially huge global audience?
It’s important for me as an artist to never poo-poo certain albums, because somebody loves our first album and somebody loves our new record. I love the fact that our most-played song on the internet right now is “Let’s Ride” from 2018. That’s a huge testament to our fan base following along and not just wanting “Punk Rawk Show” and “Chick Magnet” and “Responsibility” and “Heard That Sound.” We do have these different singles and sets that we always used to do live, but with the Between This World and the Next shows, this is the seventh one coming up and we’ve already played over 150 different songs throughout those sets. It’s amazing to be able to do that because I wouldn’t want to do that at a live show where people are right there. Our live sets are definitely paced differently than how we pace them for a stream, and I think that’s something that bands probably still don’t quite understand. It always feels a little weird at first, but the beautiful thing with what we’re doing is that the nervousness is still there, because we can’t stop and be like “Alright, let’s try that again.” People are watching. They’re there. They’re interacting. They’re in the chat room. So it still gives that sick feeling, which I think is what a lot of artists love about playing live. It’s almost like a secondary drug or a little addiction. It’s a sick feeling, but it’s also such a good feeling when you conquer it.