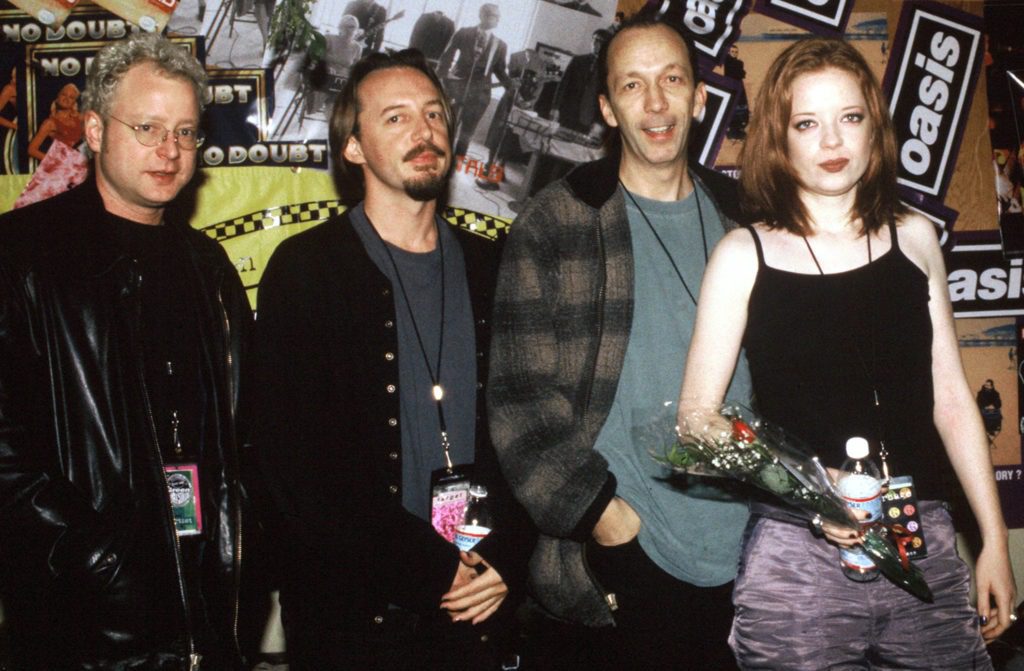 Cooped up in her Los Angeles studio, the fierce frontwoman has agreed to chat about the days she spent writing and recording Garbage, the double-platinum debut LP that launched her band as genre-smashing harbingers of a new alt-rock sound.

But she’s going to tell the story her way.

“You try walking in insane 100-degree heat through Madison, Wisconsin in black combat boots, thick black tights, a kilt, and you’re sweating your fucking arse off,” Manson tells SPIN, speaking of the unromantic trudges she spent nearly a year retreading between her hotel room and Smart Studios — then a headquarters for well-traveled producers Butch Vig, Steve Marker, and Duke Erikson. It was summer 1994 (then fall, then winter, then spring ‘95) as the foursome methodically worked on a new project they’d sardonically labeled Garbage.

Manson had little choice but to embrace the Midwest. Her previous two bands, Goodbye Mr Mackenzie and Angelfish, had both fallen apart in her native Scotland — floundering success, legal problems, and unemployment checks. She needed a fresh start, and in a moment of sonic serendipity, Vig and company were in search of a female singer. Marker spotted Manson on MTV, playing with Angelfish — and when they offered her an invitation to fly to America and jam with the man who famously produced Nirvana’s Nevermind, Manson jumped.

“When someone like Butch Vig calls, I knew I’d be an idiot to turn that down,” she says.

At Smart Studios, the hours were long and Manson was nearly destitute — eating only once a day, she says. But the uncanny bond between the 28-year-old vocalist and her new, somewhat older bandmates was too magnetic to abandon. They wrote and recorded, wrote and recorded. “Vow.” “Queer.” “Stupid Girl.” “Only Happy When It Rains.”

As the Aug. 15 anniversary approaches, Manson revisits the record that changed her life and tore all those little worlds apart. She also slides in some details on Garbage’s nearly-completed new album. SPIN: Many fans know the story of Garbage’s infamous first jam session and how poorly it went. What about that second meet-up? What changed?
Shirley Manson: They had done some homework by then … I was shocked when I got to Madison and realized what a hot mess they were. I had come from bands that were very self-disciplined. But when I got to Madison, these dudes were so laid-back, drinking beer in their Green Bay Packers baseball hats. I’d never spent time with people like that before in my life. So I was so freaked out about the first meeting, but the second one I knew what I was walking into. And they had put more of a concrete idea together; they had sketches of some songs … The two songs we worked on that day were “Vow” and “Queer.” It was the beginning of us realizing we had some things in common.

When you think back to ‘94/’95 — all that time spent making the debut album — what’s the first memory that pops up?
Sitting on an airplane, about to touch down in Madison, not having a clue where I was going or who I was going to be working with. It was both thrilling and terrifying. I think of how different I was as a person, compared to who I am now. I was so young and so afraid. And the bizarreness of coming out of Scotland and coming to America, it was such a profound experience. Especially going into the midwest. At that time, Madison was dairyland. It had the college, but it wasn’t as “cosmopolitan” even as Edinburgh. I came from an urban environment into a small American town — it was fucking wild.

At the time of writing and recording, you were totally broke, right?
I was flat broke. But I come from a very proud culture. People in America talk about money a lot. In Scotland, we don’t talk about money a lot; it’s not considered polite. But I was in Madison with pretty much zero money, and [the band] didn’t know that. But they did give me per diems. I didn’t immediately become a member of that band. It wasn’t until about three months in that it was, “We want you to be a full-time member of this band; we’re going to cut you in.” But for the three months preceding that I was pretty much eating once a day, at the studio at 9 o’clock at night. I was poor, walking to the studio every day, whether it was fucking minus 10 degrees or 100 degrees. And it was a pretty long way! [laughs] It’s funny to think about now, but I was utterly miserable.

Getting into the tracklist, every song on Garbage has all these layers and this intricate studio precision. Which track was most difficult to “get right?”
Probably “Supervixen.” The lyrics of that song must’ve changed about 5 million times. It literally began as a song of love, as an ode to Chris Cornell, who I was kind of obsessed with. Then it turned into a song about obsession and worship. Lyrically, it went through a lot of changes and melodies — this, that and the next thing. Also, you have these really incredible stops at the beginning of that song. Nowadays that’s so easy to replicate because we’re all recording digitally, but what’s so astounding about “Supervixen” was it was all done on analog. It was quite difficult to do when you couldn’t just flip a button.

How was “Vow” chosen as the lead single? Maybe it’s just me, but listening to the album now, it doesn’t jump out the way “Only Happy When It Rains” or “Queer” do.
Well, that’s because you’re young! The difference is 25 years ago, when you were an alternative rock band, you didn’t want to go with …like, “pop” was not a cool word. Pop has become this sort of monolith that we can’t escape. Back then, if you went out sounding like you gave a shit about being on the radio or chasing commercial success, as an alt band that would’ve been the kiss of death. When I look back now, I think “Vow” was the perfect choice. It’s a powerful statement. It’s loud, and guitars were still en vogue then, so it was fucking exciting.

Can we talk about “As Heaven Is Wide”? I love the menace of that song, the pounding drum sample and, as a guilty catholic, the biblical satire. Where did that all come from?
Truth be told, that song was written by [guitarist] Steve Marker, and Steve was such a fucking weirdo on that first record because he’d never really been in a band for any length of time before. So when he would work, we weren’t really allowed to be in the control room with him! [laughs] He would often record at night, and then we’d hear it in the morning. “As Heaven Is Wide” is one of the songs he brought in, and it’s obviously about sexual abuse at the hands of the Catholic Church. It’s a pretty fucking dark song, and the rest of the band were like, “This is amazing.” And I was a bit scared because I knew I’d be the one singing it. At the time, 25 years ago, to speak out against the Catholic Church was whoa, some heavy stuff. And I’d come from a pretty religious background: My dad is a very devoted member of the Scottish Presbyterian Church. I had a lot of angst about that, but I knew ultimately that’s what our job was, to talk about stuff that people don’t necessarily want to talk about. The opening line of “Milk,” the album’s last song, cryptically begins, “I am milk / I am red hot kitchen.” What does that mean?
Well, I’ve always termed ‘Milk’ as a siren song. You’re trying to lure someone to you. To me, ‘I am milk’ means ‘I am your sanctuary. I am calming and comforting, come to me.’ But nobody wants a bore, so of course, you need some fire. I actually ripped that line, ‘I’m red hot kitchen’ from [poet] Michael Ondaatje’s The Collected Works of Billy The Kid. There’s a line about somebody’s throat being a red hot kitchen, and I loved that line. I thought it made for a beautiful juxtaposition. Call me crazy!

That was the first song I ever wrote from top to bottom. The guys were taking a meeting downstairs, and I was bored and learning guitar — the chords of “Milk” are really basic — and I wrote the words and melody. They asked me what I was working on, I said ‘it’s a song I wrote,’ and they said ‘it’s beautiful; let’s work on it.’ We worked on it for a few hours, and I went back to my hotel and listened to it on my Walkman cassette player nonstop for three hours. [Laughs.]

When you first started performing these songs, with all their samples and guitar stacking, which was most difficult to recreate on stage?
Butch nearly had a nervous breakdown over this because he felt it was really, really important that everything sounded as close to the record as possible. I had a much more cavalier attitude toward it since a live experience is so much different from the record anyway. I didn’t sweat it. That’s why the guys in the band versus me have always had a good chemistry because I am the complete opposite. They are very detail and tech-oriented, and I couldn’t have given less of a fuck about that. But Butch had always been sort of a tech-head anyway, so he asked around and figured it out.

Who are some of your favorite bands these days?
My favorites right now are IDLES, who I’m obsessed with. I’m obsessed with [IDLES frontman Joe Talbot]. I think he’s a remarkable rock star, and they make great, rebellious-sounding records. I can’t love them enough.

This year, Garbage is eligible for the Rock and Roll Hall of Fame for the first time. Is that something you think about? Do you care?
It’s funny, I have nothing but contempt for award shows and recognition until I get them myself, and then I kind of like it. [Laughs.] But I don’t take it very seriously anymore.

What can you say about the new album? Can we know what it’s called or when it’s coming?
I could tell you, but I probably won’t because of the situation … We finished our record literally a week before lockdown really happened. So we got all the recording done, which was astounding for us, so we now have that record sort of in the can. It’s currently getting mixed, so there is action happening on that front, and it’s keeping us all sort of vaguely tethered to the real world. There were plans literally the week before the shutdown that we were going to release it in early spring of next year. Now I have no idea.

It’s certainly a different-sounding record than our last couple. It has lots of guitars, lots of melodies and hooks. It’s poppier than the last record. We were very inspired by the weird, subversive pop of Roxy Music — that was kind of our muse. Not that it sounds anything like Roxy music, but that was definitely something we thought about a lot.

I can’t wait to hear it; I hope we’re all around to hear it.
[Laughs.] You have now revealed yourself as to why you wanted to talk to me — you, too, have a heart of dark.