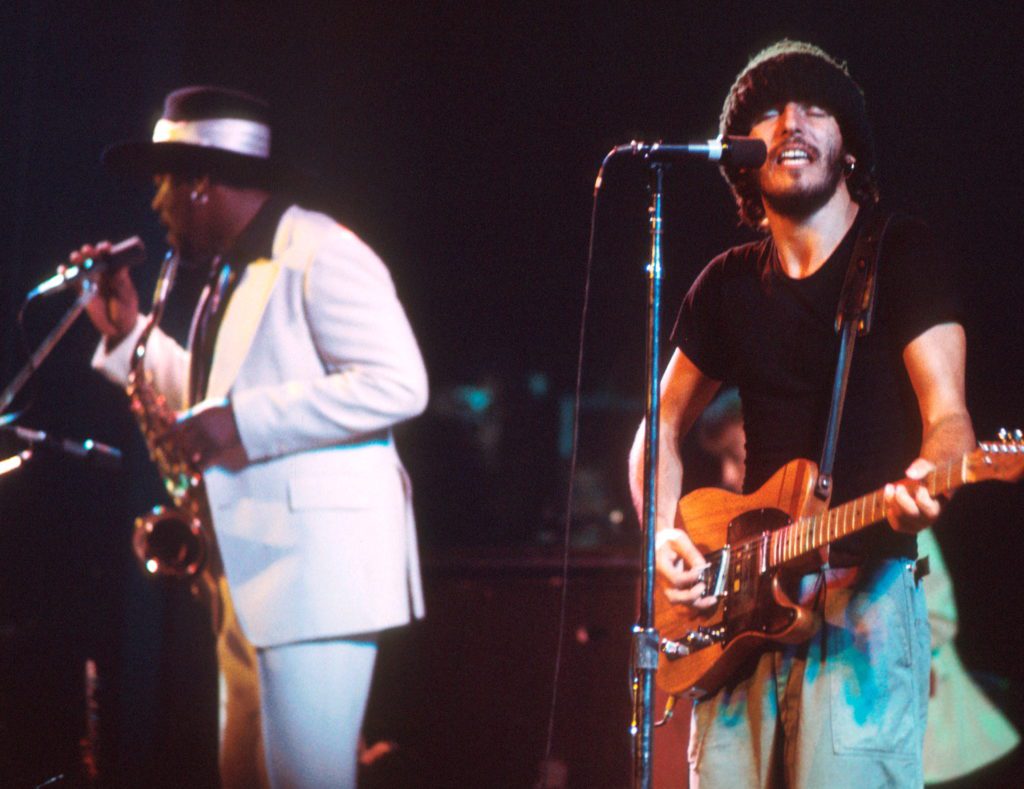 In a time when concerts may feel like a distant memory, I find myself thinking of the ones I’ve seen — either in person or on film — that stands out as a reminder to keep me company during the waiting. With that, let’s look back at a career-defining, career-inspiring concert that was arguably undefeated among Gods and humans. I’m talking about the cold, presumably damp, and absolutely electrifying night of Nov. 18, 1975 at Hammersmith Odeon (as it was then called) in London, England. This is the site where a virtually unknown (at least to British audiences at the time), Bruce Springsteen and the E Street Band would take a crowd of 3,000+ (seated) souls and usher them into the upper gates of holiness, known as New Jersey. Tonight he would sing of 10th Avenue, Mary, Sandy, Madame Marie, the Magic Rat, the Barefoot Girl and all other things that can only be found on the seaside shores of Monmouth and Ocean County, New Jersey. In 1975, to a packed crowd of English people, it meant, well, absolutely nothing.

Everyone knows that introductions and first impressions are often everything, and young Bruce was no exception. So, the very first emotion that met him on this journey was an absolute, all-encompassing rage that inspired him to tear down each and every poster and flier that read the offending statement “England Is Finally Ready for Bruce Springsteen.”

The rest of the day was doing press, soundcheck, and dealing with a nasty cold from the travel and weather that had Bruce thinking maybe he wouldn’t be able to do the show at all because his voice was all but gone, but this is where the Boss is a professional through and through, and the show had to go on.

So he did what he always does, and took us on a wild fantasy ride of burned-out boardwalks, seaside lovers, and saxophone hymnals. Salvation via extended Maestro Echoplex-soaked guitar solos. Through the trapdoors of our daily grind into an all things possible belief that just maybe — music can still save us. So, to begin, in the dark, with a spotlight on pianist Roy Bittan, we hear that immediately memory-inducing introduction of the ivories playing those notes that can only be an invitation. “Thunder Road.” The next sound we hear is the cold ravaged voice coming from underneath a floppy wool hat, a light blue work shirt that you’d only find on mid-level car mechanics, and a pair of trousers a few sizes too big — “Screen door slams, Mary’s dress sways…”

Just like that and the rocket takes off for the next two-plus hours full of explosive versions of “Tenth Avenue Freeze-Out,” where the howls and yelps of a guitarless Bruce’s commands to the band can be heard over the blasts of tension and release created by the shifting dynamics of the live arrangements they had worked out. They completely reimagined “The E Street Shuffle,” set to the music and melody of Sam Cooke’s classic “Having a Party,” then it’s “Born to Run,” a raucous 17-minute version of “Kitty’s Back,” “Backstreets,” “4th of July, Asbury Park (Sandy),” and a Detroit Medley that would give any soul ensemble a run for their money. This was inspired, from-the-heavens passion and fury these sudden legends were playing with.

Near the end of the show, Bruce takes, “For You,” one of his earliest songs, and lays everything bear sitting at Bittan’s piano while he hisses and wails out one of his most bitter, passionate, and often overlooked love songs. You could hear a pin drop for the next eight minutes as Bruce almost whispers the words, “for you, for you, I came for you. But you did not need my urgency.”

The fact that Jon Landau had the foresight to capture it all on film this early in Bruce’s career was a miracle. We have to remember that in November 1975, Bruce wasn’t the chart-topping megastar that we know for the headband wearing, Friends cast-dancing, muscle videos from the ‘80s. And especially not in England. Most people — music fans like you and me — were just showing up to find out what the hype was all about. And some of those music fans were legends in their own right.

Now, what is not talked about very often, is the importance of those musicians being there on this particular night. Peter Gabriel was at a crossroads in his career. He was very successful in Genesis well before they released hits like “Invisible Touch” among other late ‘80s delights. This was when they were pioneering a newly born art-rock scene set out to challenge their audience and pop music at large. Legend has it that while watching Bruce command the stage, and slide off the edge into the orchestra pit to find his hat, telling Mighty Max [Weinberg] exactly how many snare hits he needed at that moment with a “BANG!” Or a “ONE TIME” — Peter saw what he needed to see from his muses, and they answered, “You gotta go solo.” Saint Joe Strummer also found divine inspiration that night and saw the soul-punk revival of the E Street Band and turned that into a battle charge in Joe’s heart that would show him his Excalibur — the weapon to lead his own charge: The mighty Fender Telecaster.

From that day on no other conductor’s baton would do. There was one other famous attendee that night, and someone I’ve always wondered about when I listen to the absolutely epic, and in my opinion, the definitive version of “It’s Hard to Be a Saint in the City” — as Bruce almost squeaks out from his illness: “This’s for Pete.” I came to find out that it was the one and only Pete Townshend, who was side stage watching exactly who’s next.

Even in this magical instance, crowds can be tough. At the beginning of the concert, you can clearly hear someone yelling for Bruce to “Put the guitar on” during the delicate intro to the “The E Street Shuffle.” But by the end, I doubt there was a person in the house unmoved. You can hear the chatter become laughter and cheers of delight at Bruce’s beautiful goofiness, like when he tells the crowd how “on the eighth-day, Little Steven looks down on a bunch of drunks” as if this were a tale recited from canon.

The personality and tightness of the musicians in the band, Little Steve’s bright white ‘70s suit and hat, and Clarence’s [Clemons] masterful skill as a saxophone soloist, in addition to his playful sideman routine to Bruce’s shouts of “BIG MAN!” and delivering the punch line to Bruce’s lyric “packed with East Coast… Muscle” as Clarence flexed his biceps would’ve been enough for anybody to believe that this was a show for the ages. But the fact that it impacted these wildly influential musicians to make life and history-changing decisions right there in that very venue is proof of what a performance Bruce and the E Street band gave. If you have some time, do yourself a favor and watch this concert. It’s widely available now, and for rock fans of any age, it’s not to be missed.

In the liner notes of the 30th Anniversary box set of Born to Run, Bruce compiled his thoughts on this show and at one place, it reads “armed with a setlist I still dare any young band to match…” At 26 years old I read that not as a challenge, but as an invitation to greatness. A welcoming hand reaching through the magazine covers, songs, guitars, amps, and everything else to ask me… “Want to try?” And my answer was and will always be, yes.