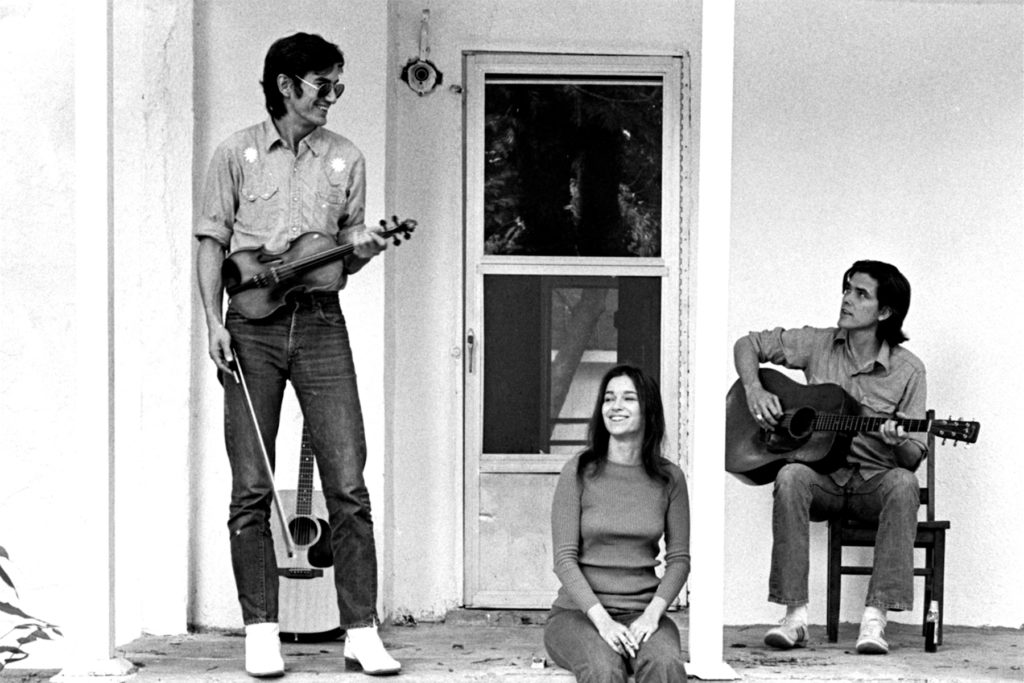 This film will do much to educate those unaware of the immense talent that bubbled out of Nashville, and then Texas, in the ‘70s.

The documentary, Without Getting Killed or Caught, tells the story of three immensely talented and interconnected artists: Guy Clark, his best friend Townes Van Zandt and Susanna Clark, who loved them both.

Culled from both Susanna’s diary and the biography of Guy, Without Getting Killed or Caught: The Life and Music of Guy Clark, by Tamara Saviano, the film’s co-director along with Paul Whitfield, the story is anchored by Sissy Spacek’s voiceover as Susanna. Live clips, clever animations and home movies are interspersed with more recent interview clips.

As the story unfolds, Susanna paints while Guy and Townes struggle to hone their songwriting skills. When Jerry Jeff Walker covers “L.A. Freeway,” Guy finally is on the map. Guy wrote the song with Susanna’s eyeliner pencil on a burger wrapper, with the wise advice to any songwriter that “if you ever have a fragment of a lyric, write it down because it will quickly disappear.” So you know, the outlaw country movement is wider than just Willie, Waylon, Kris and Johnny. Fellow travelers include Rodney Crowell, Steve Earle, Vince Gill, Lyle Lovett, Terry Allen, who float in and out of the narrative, providing perspective and color. In fact, all these artists covered Guy’s songs, as did so many others. Although honored and respected by his peers, wider recognition escaped Guy for too many years.

Mind you, Guy seemed to push back on stardom, especially if it meant shortchanging the song. Guy rebelled against the Nashville way of recording and threatened to change his name if RCA released his recordings in a way he didn’t like.

His first album (Old No. 1, from 1975) drew on his upbringing in Monahans, a tiny dusty west Texas town. RCA dropped him after two albums. Warner Nashville picked him up, and despite interactions with the likes of Emmylou Harris, Guy bumped into the same tensions between stardom and poetry. Like Townes, Guy required the lyrics to work first as poetry. After five albums on two major labels, Clark stopped chasing hits and moved solidly into acoustic folk. The great reviews did not translate into sales, but covers of Susanna’s songs charted easily. She seemed to prefer to paint instead.

Wherever they lived, Susanna and Guy’s house was a gathering of like-minded artists. Although the film charts the course of Guy’s life, it is told through the reflections of Susanna. In one of her many poems she wrote tellingly about Townes and Guy: “One is my soul, the other my heart.”

Audio cassette recordings made by Susanna are more than interstitial elements, they provide a fundamental bedrock for the film. Susanna eventually separated from Guy — he admits his bullshit was getting to be too much.

Townes was a soft place to land, and the same next for Rodney Crowell.

By the time Americana became widely recognized, Guy had been performing it for years. A couple of albums on Asylum brought him a wider audience and a foundation for the recognition Guy finally received in the mid-1990s.

The title of Rounder’s compilation Craftsman drove him crazy, but it was a great introduction for those finally discovering his immense talent. Susanna and Guy’s orbits finally overlapped again, and they fulfilled their promise to never separate.

Townes’ long downhill spiral was heartbreaking and seen firsthand by Susanna and Guy. His death on New Year’s Day 1997 was seemingly inevitable.

Into that vortex Susanna now swirled downward, the pain of a broken heart and the onset of cancer kept her bedridden for 15 years. Nonetheless, Guy’s star was ascending. Accolades from the industry stacked up higher and the larger public finally discovered the treasure trove of his music.

This warm tribute to Guy, Susanna and Townes will surely thankfully send even more folks to discover the wonderful music that emanated from their creative gathering.

Produced and Directed by Tamara Saviano, Paul Whitfield
Writers: Tamara Saviano & Bart Knaggs – from Saviano’s book, Without Getting Killed or Caught: The Life and Music of Guy Clark, and the diaries of Susanna Clark