'What I Do Is What I Do:' Aesop Rock and Coro in Conversation 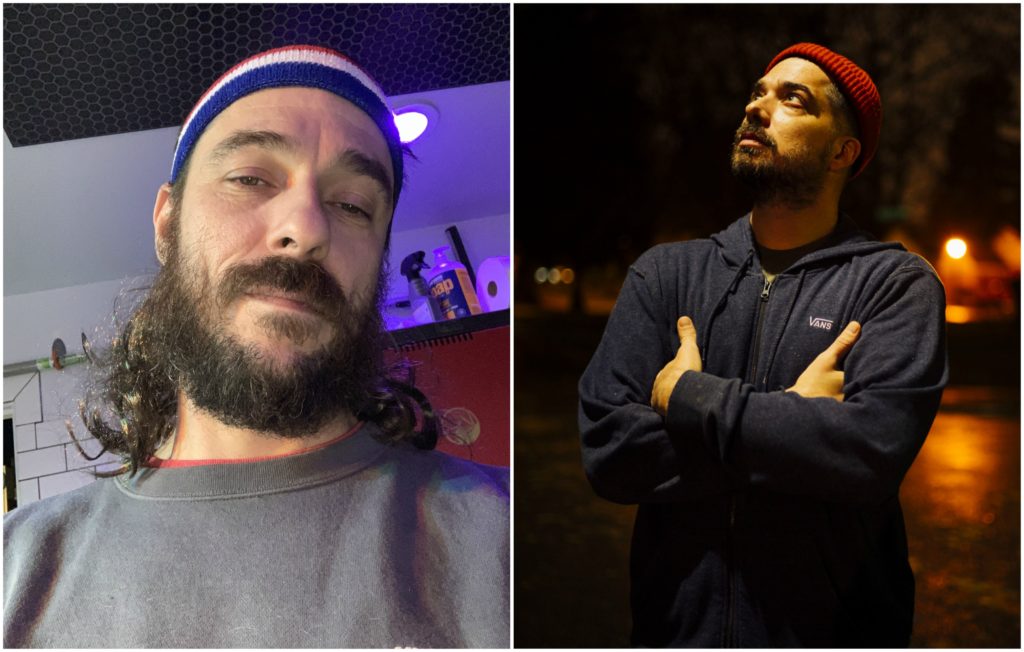 Editor’s note: Aesop Rock recently released Spirit World Field Guide, his first solo album in five years. Outside of a few videos, the 44-year-old rapper maintained a low profile in the build-up to the album. He didn’t do any interviews and hardly said anything about it outside his social media channels. He did, however, have a lengthy conversation with Coro, a digital artist who he collaborated with on Spirit World Field Guide’s art direction. Below is a conversation the two had [that has been edited for length and clarity] where they talk about art, travel and the importance of honesty in your work.

You can listen to the full conversation below.

Coro: All right, here we go. How close did this album end up? Compared to your initial vision of what you were you were gonna make?
Aesop Rock: Probably tonally fairly accurate; length, not accurate. So I had written that Malibu Ken record with my friend Tobacco. And then I was still touring for…or maybe I wrote that right after I toured for The Impossible Kid. But anyway, after I turned those songs in and I was just like, I don’t know, something fucking happened, and I think I was just sick of it. I was sick of all of it. I was burnt on touring. Rather, I think I was sick of the professional side of things, you know, the business.

I took a break, sort of, which is very unlike me. And I think I thought I was going to quit for a second. I felt like I wanted to stop doing it, but soon realized like, “Oh, I can’t; like my brain will not let me, like, stop this.” You know? This relates to something I want to ask you a little in a little while, but, yes, I was just stuck. And then my friend James. We just started talking about traveling somewhere, or just getting out of town. And we booked this trip to Peru — which happened very quickly — and the second I got to Peru, like any notion that I was going to stop writing was out the fucking window. I was like, I couldn’t fucking stop.

What was the biggest “Oh shit” moment on this project? By that, I mean pushing and evolving ideas. Was there a standout event that happened?
There are a couple of things. I remember when I wrote my first short song. I think I wrote that back pain song (“1 to 10″) and I was like, “Man, I really like this. I really like this song.” And it’s like one minute. I unlocked something here; a really short song, an idea that deserves a song. It doesn’t deserve four minutes.

You know what I got to say? I love them. Because it’s a little like peeking in the room. Like, there is just a little bit more because it’s a short, quick idea.
Thanks, dude. Yeah, they’re just, like, observational fucking short things. But that was one moment. And then when I made that song, “The Gates,” which ended up being the first single, I was like, “that’s at least a little catchy.” I would say the other thing is just those few trips I took — I ended up getting three songs out of the trips in so far as writing one about Peru, writing one about Cambodia, one about Thailand. Those trips kinda busted me out of brain jail for a while.

So what are some things you like to do to clear your head or get into the mood to write or make music?
I can’t stop, won’t stop. You know, the question I have trouble with is “how do I stop doing this for a day or a week or a month and feel okay with that and then come back to it?” For me, this shit is like what I realized when I tried to quit or whatever the fuck I was doing. This is a sickness, you know? This is not like a pastime. It’s not even a job. It’s like my bigger problem is how to turn it off and turn it on. I definitely have writer’s block at times. And then, you know, I go for a walk and try and get back in the mood and shit, but like, the reality is like, I get up and I’m just like, let’s fucking go. You know, make some shit. Do you think of this as like a passion, or is there any part of you that’s like, “Fuck, I kind of have a sickness”?

I mean, I definitely have those moments where I’m like “fuck, I kind of like painting myself into a corner.” You know what I mean? Like where you’ve just done it for so long it becomes a habit, you know? It’s something that, like, as a teacher or whatever, you guys tell your students, just, “you make it turn into a habit.”
Does it ever feel like an unhealthy relationship?

Yeah, it does, Definitely. I mean, yeah. You know, I fucking go crazy if I don’t do it for a while, I get short. You know, like the anxiety builds up and stuff.
You’re just not right. And it’s like things aren’t right.

I feel like with drawing and painting, you’re there and you’re solving a problem in front of you. But you’re really a million miles away. And you’re thinking about your life and you’re thinking like, “I’m psychoanalyzing myself.” Like pretty much the entire time I’m painting, there is another train of thought that’s always kind of going, and the two fuel each other. And there’s something about the process of sitting there and doing it, like working on something allows me to sit there and, move the pieces around and then try to figure out other shit in my life. So it makes sense.
I think I do the same. But I guess the part that for me when I start saying it goes from a habit to a sickness is like my brain won’t stop, you know?

I think people don’t realize that about doing what you love, right?
Yeah, and I feel what you’re saying because, I mean, I’ve never drank alcohol, so I would go to these bars that my friends would go to, and I just like I wasn’t drinking growing up. And I was just the sober guy at the bar. And that’s one of those feelings started coming. Like, I would rather be home making a beat. Yeah, I’d rather go home and draw a picture.

Would you ever consider applying your writing skills to other avenues outside of music? Film? television? Tell-all book?
Oh, God. Inside the industry of underground hip hop tell-all. Shitty rap beefs exposed! Both sides lose! Um, I’ve considered it but this has to be written professionally. I like the idea of writing a book but it’s extremely daunting, although I do. One time I started writing all these really short stories. Maybe they were like, four sentences. There would be childhood memories there. I was trying to keep it concise and be funny by the end of it. So I started that, but it did trail off.

I do have an idea, like, yes, I want to write a movie. But that’s where the idea ends. It’s probably like when a graffiti writer like yourself gets asked to get a good gallery show. Yeah, exactly like, “am I faking it or am I gonna be able to make this transition?” You know, I mean?

Yeah, totally. I always felt like I was faking it. Any time I’ve ever done like an exhibition, it just feels so fake. Oh, yeah. God, even still…
You’re like a fucking master.

I don’t show ever [as in showing his work in galleries]. So rare that I show stuff. So, I just still feel like I’m faking it or something. Like I’m a guy pretending to do that. I feel like generally, my answer would be something that would disappoint people.
Right. It’s not like you’re doing like, a show on “the theme of the show was this.”

You know, they’re just things like, I don’t feel like I want to climb up on that pedestal, you know what I mean? Like, I live a small, simple life, like, sometimes I just wanna paint the dead rabbit that’s in the fucking light.
And you know, I’m that dude. I think that’s why we’re good friends. But, like, I want to write a song about the dead rabbit outside the garage, like, that’s the songs I want to write. I’m not confronting the issues in my music. When people shame me for, you know, “You have this platform, you should be writing this type of music,” and I’m like, “man, no.”

You know, as you get older, you definitely find things that work for you. And I think the true definition of it is honesty. You want to be honest with what you do and what you make and you can’t fake that.
I wanna be swept the fuck away, you know? I make shit that I’m like, I know this fucking world is falling to shit right now… But this is what I do. What I do is what I do.” And it does have value in a time like this. You gotta do what comes naturally to you.

What’s the point of this album?
I think the point, which I think you might identify with because you said you make personal paintings and I make these albums that people are gonna listen to. But at the end of the day, okay, it’s my journal. It’s my document, a part of my life — that’s, you know, sometimes a year long. I need to get it out of me somehow. And that’s my chosen path. I think the point is two things. It’s like it’s documenting it for yourself. And then it’s when someone else is like, “Hey, I identify with what you said here. I love your work and when you said this thing, I really identify with it.” I’ve been working on this for years, and I do what I want.

That’s just someone being like “Yeah, man, me too,” you know? Just like “all right.” You know, that’s cool. I think that that and a combination with a much more selfish reason, which is just it’s like an exploration of this thing that I found that I’m kind of good at and I’m going to see it through. I have to see it through because I’m not running through the motions. I feel like I have new stuff to do, you know? I don’t feel done. No. It’s always really fun when you put something out because they do feel very personal. I can’t take a break for too much because, like, I just have a fear I’ll lose it. And whether or not that’s true, I’m riding out with that because I don’t want to find out.