Travis Scott Is the Brand to Collaborate With in 2020 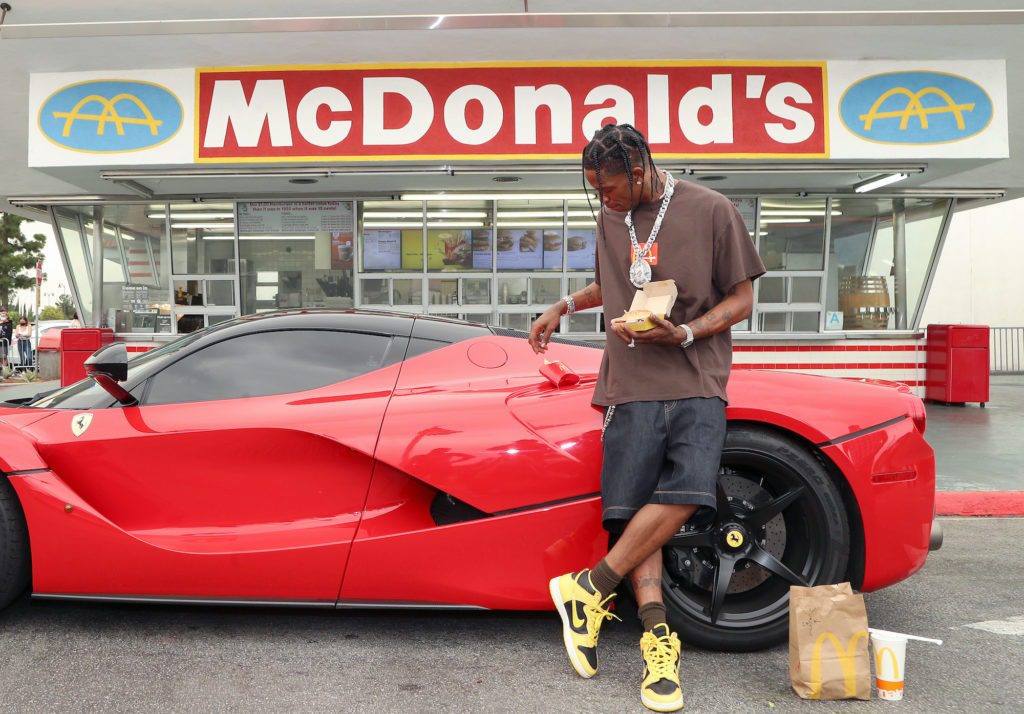 In a year that has stilted the release of massive albums and halted the live music industry, Travis Scott is one of the few musicians who seems to be doing better than what he was before — if that’s even possible.

At the end of October, he was named as a strategic partner for PlayStation before the release of their latest console, the PlayStation 5. In September, he received his own meal at McDonald’s, becoming the first celebrity to do so since Michael Jordan in 1992. Scott’s ongoing success stems from his music — but in his latest, pandemic-influenced chapter, he’s collaborating with massive companies to touch pop culture in ways his songs probably can’t. He’s becoming an even bigger household name mid-pandemic, at a time when artists are struggling. But the situation is a little more curious for these companies, who seemingly don’t need the collaboration. So why is the phenomenon happening? What has Scott done in 2020 to make him the go-to artist for global brands?

Despite being signed to Epic Records since 2012, Scott didn’t truly breakthrough until his second mixtape, 2014’s Days Before Rodeo. With his explosive, collage-style — DJ Khaled-sized collaborations with handfuls of features, songs with multiple personalities, sound effects as gratuitous as pepper on scrambled eggs — and mosh pit-worthy tracks, he quickly became one of America’s favorite emcees. That led to his debut album, 2015’s Rodeo, which debuted at No. 3 on the Billboard 200. In the five years since, he’s climbed his way to rap’s peak: selling over 45 million records, earning six Grammy nominations and notching three platinum albums on his belt.

During the stretch from Days Before Rodeo through 2019, Scott’s collaborations were solely a part of the fashion world. Brands like Been Trill, Diamond Supply Co. and BAPE linked up with him because he would be good for their brand — with their success directly impacted by Scott’s inclusion. As the world suffers the effects of the COVID-19 pandemic, which has disrupted both global economies and regular life, Scott has upgraded to companies on bigger playing fields — ones that, on the surface at least, aren’t impacted by his inclusion into their marketing schemes. Whether he created a meal or not, McDonald’s could still rake in billions of dollars of profit. So what is the value of a Scott collaboration in 2020?

“If done well, if strategically the idea and execution suit the brand and audience just right, the value opportunity is exponential,” says Shiloh Gray, vice president of brand and creative at Winc Wines, who has worked in the ad industry for over 13 years. “Smart brands and celebrities know their audiences intimately. These partnerships are created to reach new consumers or to shore up consumers that may be ready to move on.”

One of Scott’s highest-profile collaborations of 2020 was with Mattel, the company behind Hot Wheels. In January, they teamed up for the giveaway of a BMW M3 E30 toy car designed as a replica of the one adorning Jack Boys, the debut compilation album by his Cactus Jack label.

“When we learned that the Jackboys album was inspired by all things automotive, one of Travis’ other passions, it presented a unique opportunity to connect his pop culture phenomenon and innovative, creative spirit with our Hot Wheels brand,” he says. “The resulting collaboration celebrates car culture and music in a mash-up made for our fans. Our design team jumped at the opportunity to make magic happen in record time, and the resulting buzz of partnership speaks volumes for what can be done when two brands authentically collaborate.”

According to Gray, authenticity is at the center of Scott’s current marketing success: “In the last few years, there has been an interesting evolution of brands that sit comfortably in the zeitgeist: mature luxury houses such as LVMH, challenger fashion brands like Supreme and Pyer Moss, traditional ‘nerd culture’  brands like Apple and Square Enix and, most recently, the everyday normal quick-service restaurants like McDonald’s and Popeyes. Now more than ever, being an everyday person can be cool as fuck. Travis is smart in that he’s working with brands he generally uses and already has an affinity for.”

Scott’s McDonald’s meal is in this vein, being something that he himself gets: McDonald’s PR department confirms over email that this collaboration happened because of his familiarity with the brand. “He’s the definition of big in culture,” a McDonald’s representative says over email. “But even more importantly, we wanted someone who is a true fan of the brand and loves our food. Travis is a longtime fan of McDonald’s. Growing up, he was a regular at his local McDonald’s in Missouri City, near Houston. He was known for dipping his World Famous Fries in BBQ Sauce, in true Cactus Jack style.” As Scott continues to check all the marketing boxes and work with larger and larger brands, one has to wonder about the integrity of these collaborations and whether consumer bases will ultimately grow tired of seeing him everywhere. It can take away from the authenticity of the moment and the artist — something that Gray says can impact the company too.

“These kinds of partnerships can have an immediate effect on the perceived quality of the brand,” he says. “If the connection is natural, it’s all good. If it feels forced or manufactured, it’ll have an immediate negative effect. In our current media and news cycle, these things usually work themselves out rather quickly. But continued ignorance over time will tank a brand’s perceived value, for sure. The best partnerships happen when a brand and a public figure have an overlap in values; it makes it super easy for consumers to move between each freely with little effort and little pressure.”

Scott’s current game plan, from the outside looking in, has to be in the essence of what he’s working toward in the future. If companies keep coming to him for collaborations of this magnitude, he must be bringing measurable value to the table. The rapper set a record with his April Fortnite virtual performance by bringing in 12.3 million viewers to Epic’s video game. McDonald’s publicly announced that the Cactus Jack meal, shortly after its release, was so popular that some restaurants were sold out of its ingredients. What could be next for him? Continuing to ride this hot moment — or something bigger?

“His approach to creating is fluid with an otherworldly flair, so I imagine that this is just the beginning for him,” Gray says of Scott. “I would also add that these partnerships are growing his Cactus Jack brand at an accelerated pace and I imagine that these collaborations are welcome, paid practice for a future empire that he is building not-so-secretly.”

What is that future going to look like? A new album called Utopia is coming soon, so there’s no telling how he’ll market it. Perhaps create a new planet? Whatever he plans to do, Gray knows that companies will continue to come lined up for him. “He’s a young, influential, digitally native and open-minded creator with a massive fan base,” Gray says. “He’s a marketer’s dream avatar in human form.”