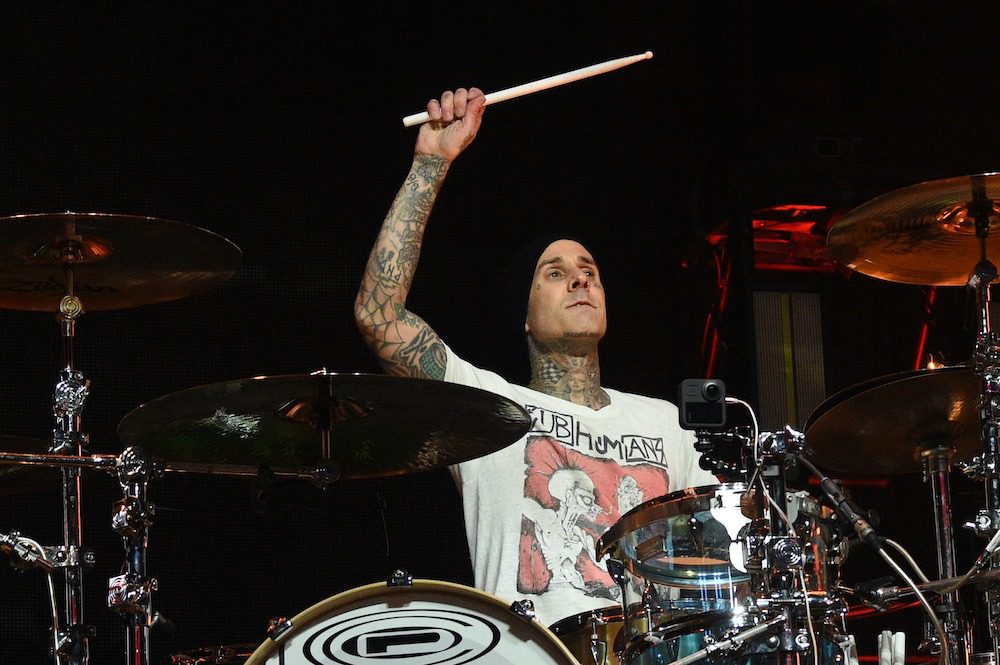 Almost everyone saw (or at least heard about) the livestream where Blink-182 drummer Travis Barker teamed up with Post Malone to pay homage to Nirvana in a rousing 75-minute set that, by some estimates, raised nearly $3 million for coronavirus related charities.

Barker has, in his own words, been thriving during quarantine.

“As far as quarantine I can just focus and create. I’ve been very productive and just been on one,” he told SPIN last week when we spoke to him by phone as he traveled from Los Angeles to Salt Lake City on his bus for a week-long songwriting session with Malone

The drummer has new Blink-182 music coming in the next two weeks; he has been busy at work producing the new Machine Gun Kelly album, Tickets To My Downfall; he signed jxdn, the first artist to his new DTA imprint, a collaboration with Elektra Records. And that’s just the beginning.

Barker is reveling as a label executive and producer, on top of his regular duties with Blink-182. He spoke with SPIN about all his new projects – including working with friends and a new Blink-182 song – and much more.

SPIN: Why do you feel this has been such a fruitful time for you?
Travis Barker: The first part of quarantine I was literally stuck at home so we did the Paramore cover, Kels [Machine Gun Kelly] and I. We did “Misery Business” and then from there, just every day there was something by default. You really don’t have anything else to do so you really just start to get creative. I slowly started going to the studio and just really tapping in with artists that were also quarantined and worked on projects. And I think everyone is so grateful and fortunate to be able to make music and just be alive, seize the opportunities and be creative and make great music.

It does seem like there are people who have risen to the occasion in this and been more productive.
Sure, MGK was one of those people. Even his label hit him a couple of weeks into quarantine and was like, “Dude, whatever you’re doing your streaming numbers are up, your YouTube numbers, you’re more relevant than you’ve ever been.” And I feel like some artists during quarantine are gonna be like, “I’m gonna take this time to rest and when it’s all over I’ll be back.” And then some people are taking this time to really go hard and it’s driving them to do stuff even beyond what their creativity was before or maybe their workload.

How did the Post show come about?
I was sitting at home and I was working with this artist named Poorstacy. I got a phone call from Brian Lee. He writes with Post a lot and is a really good friend of his and he said, “I have this song idea I want to present to Post, I’d really like you to record drums on it.” So I sent drums back 45 minutes later. He’s like, “This is awesome. Would you be down to do this Nirvana thing with us? We were talking about maybe doing 20 Nirvana covers and it’ll be a charity for coronavirus and help first responders.”

And I honestly thought he was joking ‘cause the idea of driving to Salt Lake City, “Really, are we gonna learn 20 Nirvana covers and really are we gonna figure out a way to live stream it?” So I was like, “I’d love to, I love Post and I love you, so just tell me if it’s actually serious.” We kept talking about it and they said they were serious and I should come out there in three days. So I was like, “Whoa, this is really happening.” So I just spent the next three days learning 20 Nirvana songs, which was fun because Nirvana is one of the greatest bands of all time. And then just driving out there and doing that quarantine was so cool when people are sitting around and really need live music. And what better band to pay tribute to than Nirvana?

Going through and learning all of those Nirvana songs, were there things in there that surprised you or you heard differently after learning to play them?
Yeah, you have to listen with a different ear when you’re actually focusing in on learning the song instead of just enjoying the song. There are some weird Nirvana arrangements. Like in “School” there’s some weird arrangements. In “Very Ape” I think the chorus goes like five measures instead of four. Nirvana had very cool…what seemed like very simple arrangements, but when you look a little closer it was kind of different. Everything, from playing songs off Bleach to In Utero their catalog of music is timeless and it’s just amazing. Yes, I did have to listen with a different ear and Dave Grohl’s parts were challenging.

After doing the set, were there one or two Nirvana songs that jumped out at you?
When Post sent over the setlist we looked at it and Brian Lee was like, “Dude, what’s ‘Very Ape’ and why are we playing that?” [Laughs.] Then it turned out to be one of our favorite songs to play during the set. So the whole experience was really fun.

Are you doing more stuff with Post?
Yeah, I’m actually talking to you from my bus. I’m going up to Salt Lake to just write for a week with him. Just jam and have fun. I went up there the day before and we went through the set one time. Then the next day we went through the set one time and we just played it. You can’t over-rehearse Nirvana songs or it loses its vibe. So the whole vibe over there has been very relaxed and just whatever happens happens.

As you work in all these different fields, be it artist/producer/label boss. Are there people you really admire or look up to for how they balanced all these jobs?
I think I’ve just been lucky enough to work with friends and it’s always been organic. Like the start of Tickets to My Downfall, which is the album that I produced for MGK. We had finished “I Think I’m Okay” with Yungblud and that had been out. MGK goes on tour with Young Thug and I just went out because Young Thug had invited me out to the show. So I went over there to say what’s up and of course, I see Kels. He’s like, “Dude, I gotta show you all the new shit I’ve been working on. I got this crazy song with Trippie [Redd].” And he shows me a song with Trippie, plays it for me and I was like, “This is my beat.” He shows me another one and that one was my beat too. The next day we wrote “My Bloody Valentine.” Then we locked in every day from that point on. There was no plan, no conversation. We just got in the studio every day for two months straight and made one of the most incredible albums I’ve been a part of. Denzel Curry just hit me on my way to Salt Lake and was like, “Yo, I want to do this project with you.” That’s a text or phone call you dream of getting from an artist you’d love to work with.

How did the projects you’re doing at the moment feed into DTA?
That’s my main focus right now. For DTA I signed my first artist, jxdn, and we just released his first single, “Angels and Demons.” And the same thing — artist signing artists. I’m helping him — like he’s hitting me six hours before we have to turn in artwork and I’m hustling having people do art. We’re in the studio 24/7 and we’re doing acoustic versions of songs and we’re writing new songs. I was up with him until 5 am last night writing a song with him before we left for Salt Lake City. So it’s just really guiding him and making sure everybody is on board. And just kind of executing the vision and direction we are going.

As you take on this mentor role is there someone you feel you learned the most from in your career?
For me any experience I’ve had in the studio I am so appreciative of. And I did kind of get to experience that and it was with Jerry Finn. I learned so much from him even though at the time, I wasn’t sitting there going, “Hey, one day I will be producing albums.” Or “One day I’ll be caring about other parts of a song more than just the drums.” I knew from the first time I stepped in the studio with Jerry and Blink, I was really into arrangements. I still get that one on one experience from people like John Feldmann when I’m in with John Feldmann. I think you are cheating yourself if you’re not learning something in every session you’re in.

How important is it for you to have this mix right now of working with so many different artists on different projects?
I’m spoiled. This week, Brian Lee and I produced a Blink song and recorded it. Finished three jxdn songs; finished an acoustic MGK song and reworked three other songs on the album; played on a Yungblud song; co-produced and played drums on a Steve Aoki song featuring Trevor Daniels and MGK. So it’s my dream job.

What is the Blink song and is there a timeline for it coming out?
We actually have a song called “Quarantine” that will be out in the next two weeks. Really excited about it.

What else is coming from DTA?
I got a song with Wiz Khalifa that’s dropping, a song with Run The Jewels that’s dropping. That’s just like fun stuff. But as far as finding new artists and artist development I can’t go searching for that. They’ll come to me and I’ll find them just the way jxdn does. That was special and I knew from the moment I heard him he was supposed to be signed to me. I saw the potential and I’ve been pretty much spot on because every time we’ve gone in the studio we’ve written amazing stuff. So it’s been awesome.