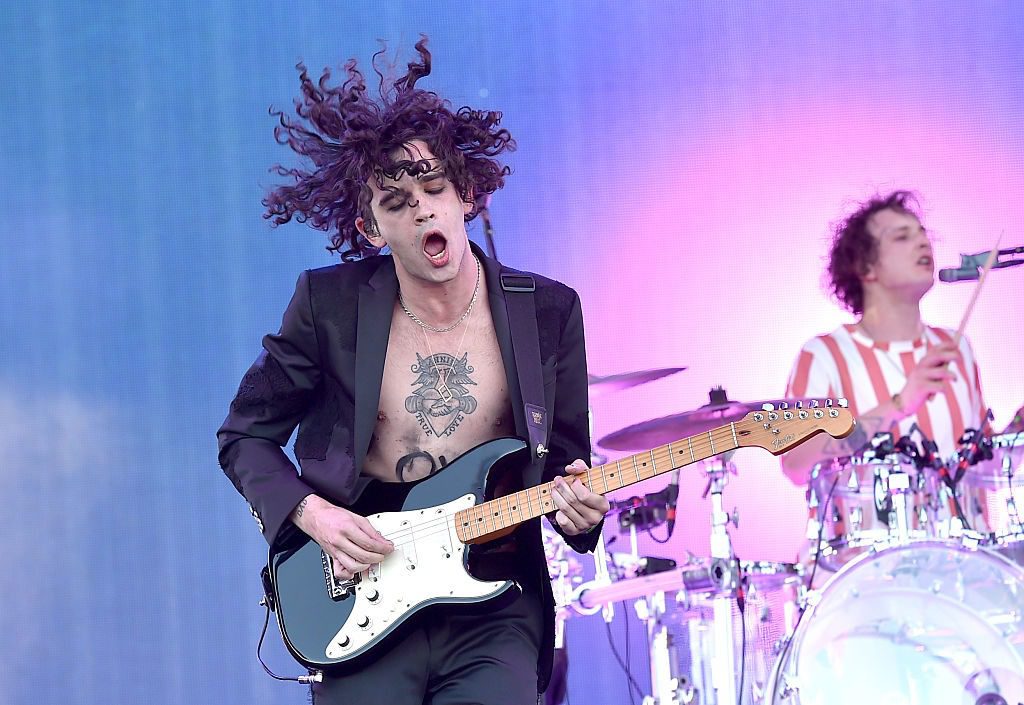 I’m dating someone who said, “don’t forget to mention that they’re annoying.” How do you forget anything with this band really; their every maneuver comes with a flashing neon sign that reads “this is the Britpop power ballad” or “tracks 9-12 listened to too much M83 (which is any at all, really).” The only thing that’s easy to forget about the 1975 is anyone in the band’s name that isn’t Matty Healy. In fact, I’m not even sure I could tell you how many people are in the band. Is it four?

And they deny being a “rock band” because in 2020 that term is considered to be more limiting than “boy band,” which both the 1975 and Brockhampton have identified as, to increased critical acclaim. So it doesn’t matter. That’s why Notes on a Conditional Form (“this is the overindulgent fourth album”) leads with (well, “leads,” after a five-minute “intro”) an Actual Rock Song because they’ve circled around to where that was the most unpredictable thing they could do. And let’s be real: We never learn what this so-called form, the notes on it, or those conditions might be. They just like the sound of it. There hasn’t been a band with this much pretense since Frankie Goes to Hollywood.

To wit; the 1975 are one of the only bands to make me pause when I’m asked if they’re any good. Yes and no, but not for the reasons they think. Their constant stylistic curveballs don’t throw this They Might Be Giants fan one iota. More contemporary bands should take late ‘90s eclectica under consideration when they underwrite their own identity. They’re not the first band to Want It All but are they ever the thirstiest. The 1975 want the freedom of Chumbawamba — respected, Mekons-inspired anarchists turned pop-cultural punchline — and the entrenched, tenured careerism of U2. After Philadelphia Inquirer compared Notes’ thrashing-tantrum opener “People” to Blur, that was sort of a eureka moment; like the young Damon Albarn, they get really caught up in the Issues of the Day (such as the one that made Healy ragequit Twitter yesterday) without having much to say about it.

They get compared to memes and the endless feed of one’s smartphone, but memes carry more information and value judgment. They’re not much like a smartphone either, their pace is just too slow. Notes on a Conditional Form was supposed to arrive two years ago, and plenty of its 22 tracks dribbled out early. They’d be the perfect target for Dan Le Sac and Scroobius Pip’s “Thou Shalt Not Kill” now: The 1975 — just a band. An even more brutal diss might be the even less 2020-relevant Dandy Warhols’ 1997 MTV2 staple “Not If You Were the Last Junkie on Earth”: “Heroin is so passé.” Tell that to the joker who wrote a biiiiig, mushy Phil Collins-meets-Phil Spector anthem about his addiction called “It’s Not Living (If It’s Not With You).”

But are they any good. I like the 1975 more than their haters and less than their fiercely devoted cult, which has ballooned to Radiohead/Tool/Lana Del Rey proportions and will guarantee their first-week number-ones every time out until they go the way of the Dandy Warhols.

For sure you can tell they’ve gotten better; the highlights of their abominably titled 2016 double-down I like it when you sleep, for you are so beautiful yet so unaware of it stuck out like, well, singles, because they were. That’s what INXS worship gets you. The marriage of Cupid & Psyche 85-era Scritti Politti and My Way-era Usher on “UGH!” especially made for a convincingly arresting tune, and both 2018’s A Brief Inquiry Into Online Relationships and the new Notes make good on it.

Songs poke out even less from the new sprawl than on Inquiry in part because there’s no attempt at a “Love It If We Made It,” which functions well enough as their greatest tune and is often compared to “We Didn’t Start the Fire” or “It’s the End of the World as We Know It (And I Feel Fine)” because it has so many words and declines to elaborate on any (beyond blaming “modernity” for failing us, sigh). There are anthems in tow, but none attempt to take on the world or quote Kanye-Trump tweet threads. And the 1975 released so many of them as advance singles that they successfully obfuscated the hits-and-filler thing. But they’re not a singles act, that would make them too easy to pin down. They’re not the Killers.

The sprawl improves their singles for one thing; the ‘90s soundtrack-ready “Me & You Together Song,” really blooms following the country-rock lope of “Roadkill,” into the best Pains of Being Pure at Heart song in years. And born Side B highlight “If You’re Too Shy (Let Me Know)” locks into its driving beat and perfect one-note synth bass just when you need it. Deep cuts also upstage the singles (this thing has a lot of singles): The skittering garage of “Yeah I Know” asserts itself better than “Frail State of Mind” or the abominably titled “Jesus Christ 2005 God Bless America.” Even though it dips plenty, Notes on a Conditional Form is sequenced shrewdly enough to provide the illusion of success at least until the real sap at the bottom. “Don’t Worry” and “Guys” are good hugs between men and good for the world’s mental health. They’re not necessarily good 1975 songs, which doesn’t mean they won’t become huge sloppy sing-alongs at 1975 shows.

A double album is probably next, and fine, let them release 80 minutes or 120; this band exists solely to combat their own ADHD, which is significantly more hyper-paced than the smartphone-addicted world they’re trying to take over. Notes on a Conditional Form plays like an overenthusiastic mixtape from an excitable, music-loving friend, who turns you onto as many good artists as duds. Because it is one.