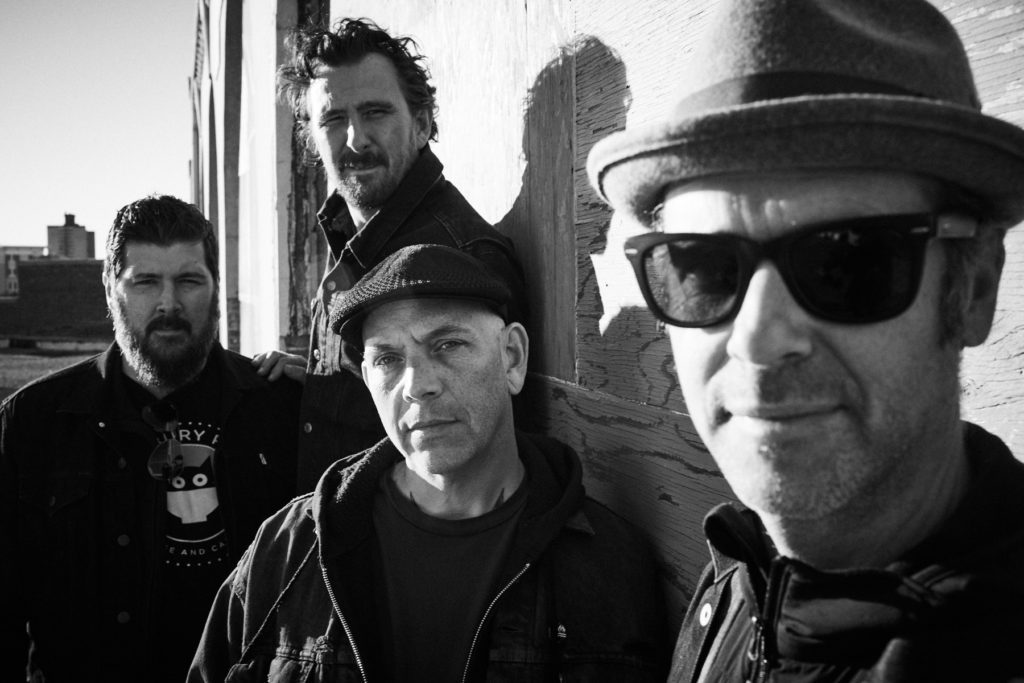 For the last 31 years, the Bouncing Souls have been a staple of the punk scene. Their upbeat, fast-paced energy is up there with Tony Soprano for the most influential things to come out of New Jersey at the close of the 20th century, and it’s hard to find a punk band in the past couple of decades that hasn’t in some way been influenced by Hopeless Romantic or Anchors Aweigh.

Now, the New Brunswick punks are back for more with Volume 2, a collection of reimagined old songs along with an appropriately themed new one called “World on Fire.” Produced by Will Yip (Circa Survive, the Menzingers) and created in the days immediately before the COVID-19 quarantines shot across the U.S., Volume 2 is far from the “live and acoustic” compilations a lot of bands throw together after decades of success.

Ever wanted to hear “Hopeless Romantic” with a Casio drumbeat thrown over the top of it? We weren’t so sure either. But it works surprisingly well, so we caught up with vocalist Greg Attonito to learn more about the album.

SPIN: What was it like to write and record “World on Fire” right before most of the country went into lockdown?
Greg Attonito: It’s funny, because we had a song or two on deck for the first week-and-a-half, and it was all evolving as the pandemic was ramping up. At the last minute — when the talk of the quarantine was really starting to heat up — Pete [Steinkopf], our guitar player, came in and said “Hey, I just wrote these lyrics about what’s going on right now.” We kind of just wrote it about that moment and finished it in two days. It was really cool and really special because leading up to it, we didn’t know if it was for real. Those last few days it started to feel super real, and then the lockdown happened on the last day. It felt strangely satisfying that we got to say something about it and record it before we knew it was going to be a long stretch. We didn’t know when we were going to be able to see each other again.

What was it like to revisit some of your older material and put some new spins on it for the rest of Volume 2?
It was really a pleasure. We did a bunch of acoustic shows the year before, and that was how the idea came to be. We had conversations in every which way about it, like “Do we do a greatest hits with some rock songs and some acoustic songs?” It ended up being a list of about 20 songs, and then we probably looked at it once during the recording session. We just went in and Will played a really big role in guiding us through our songs. A good producer will give you that far-off vision that you can’t see, because you’re in the swimming pool and you need someone standing outside to get a view. He said “We’re not really just going to do an acoustic record, right? We’re going to add other stuff and make it interesting.”

We literally just rolled in, tried a whole bunch of songs, and if we spent 20 minutes on it and it felt good, we kept going with it. I’d never made a record that spontaneously — where you’re literally choosing the songs you’re going to record in the moment — so that was really liberating and fun. The other side of it is that I’ve never recorded songs that I’ve performed a thousand times. That was really interesting for me as a singer, because I can put all of my experience into these new versions. The old versions are great, but I was able to put more of myself into these.

Were there any songs you came across from the catalog and just immediately knew those wouldn’t be included?
We had some discussions a few months before the sessions where we definitely ruled some things out. We went over the whole catalog, and we picked out a lot of songs that we thought would be great — probably enough for two records, which is part of how the Volume 2 joke started kicking around. We definitely had a no-fly list after that.

Seeing as a lot of the tracks on Volume 2 come from that late ‘90s to early 2000s stretch of the band’s career, was it intentional to primarily feature those albums or did it just kind of happen?
I think it was by default. It’s the same way we write our setlist, where those songs are just there by default because they’re the favorites of the people and the favorites of the band. They just sort of rose to the surface first. Our other criteria was that we wanted to find some songs with lyrics that were really solid, but were a little harder to decipher in the original versions. For example, “Argyle” isn’t one of the more known Bouncing Souls “hits” but Bryan [Kienlen, bassist] loves the lyrics especially, so that was why we chose that one. We wanted to do the super hits, but also get a couple of the deep cuts.

Considering how much the world has changed since you recorded Volume 2, what’s it like to look back on those sessions?
As I think it has been for everyone on different levels, it’s just been a complete upside-down turn for all of us. I see that recording session as really special because it really was the period at the end of a sentence. It was the last time we hung out in a bar or anything like that. We had this wonderful bubble of creativity right at the end before it felt like the world was pressing in like a vice on everyone. I think it’s a really special recording because of that. The songs themselves are really good songs on their own, and we’re revealing something that’s always been there within those songs. But I don’t know how they’ll be received [because] we’re in such a different world now than when we recorded them, and I don’t think anyone’s experienced such a shift in the world in such a short time. Hopefully, the songs can do something for people and bring some light to things, because not having any live music to go out to or perform is pretty hard for everyone.