Ted Templeman Is the Most Interesting Rock Producer | SPIN 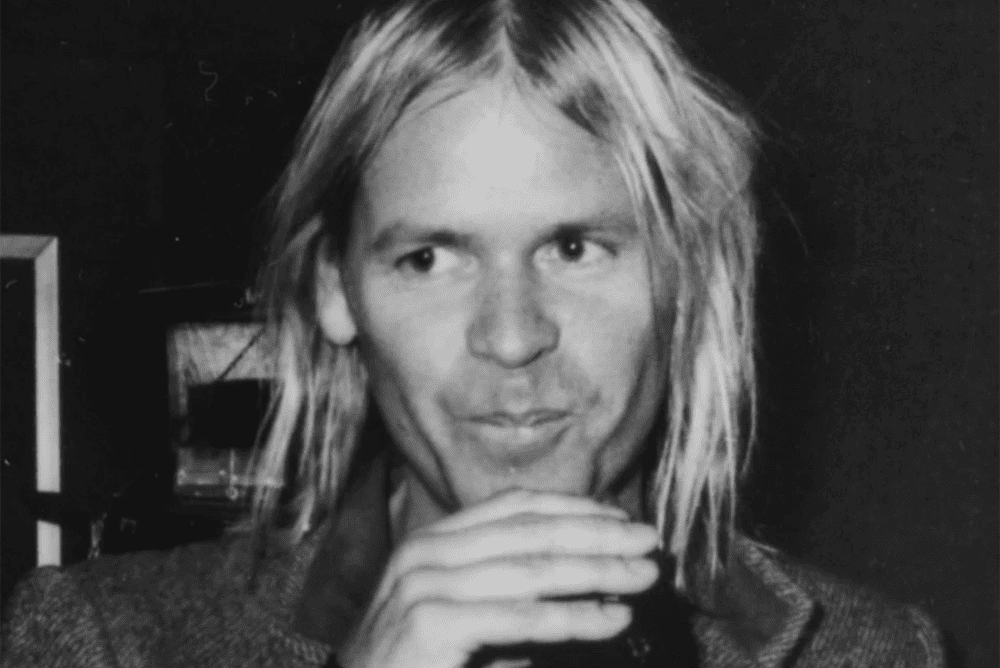 The ubiquitous advertising campaign featuring “the most interesting man in the world” got it wrong. The most interesting man is indeed a debonair gray-haired gentleman, but he’s real: Ted Templeman, record producer of classics from Van Halen, Van Morrison, stellar non-Van’s including Captain Beefheart, The Doobie Brothers, Bette Midler, and many more. The 77-year-old Santa Cruz, California, native was a revered record executive and is a multi-instrumentalist, avid history buff and sublime teller of tales.

There’s the one about, how, in 1969, after a gig with his band Harper’s Bizarre [they had a hit with a cover of Simon & Garfunkel’s “The 59th Street Bridge Song (Feelin’ Groovy)”] their TWA flight to San Francisco was hijacked. Understandably, Templeman still dislikes flying. There are a million and a half great stories about his dear friend Eddie Van Halen. Fewer, and less glowing ones about David Lee Roth. Scores about likable Van Halen singer/solo artist/tequila entrepreneur Sammy Hagar, who he produced first in Montrose. Templeman even played the B3 organ on Montrose’s “Rock Candy.”

Many of his accomplishments and exploits are in the excellent new book, Ted Templeman: A Platinum Producer’s Life in Music, written by Greg Renoff. But many anecdotes didn’t make the tome. Because, well, they’re just too juicy, and the people they’re about are still around. Reached during the height of the lockdown at his Encino, California, condo over the phone, Templeman, in the course of a nearly two-hour interview, dropped numerous off-the-record tidbits involving marquee names, including Harvey Weinstein and hairdresser/filmmaker Jon Peters; Templeman assisted both in finding homes in tony Montecito, where he also had a residence.

But he isn’t a name-dropper; the low-key producer is as amazed and humble as anyone that he’s been a part of such rarefied circles over the decades. Templeman even mentions being uncomfortable about a recent headline that called him the “maker” of Van Halen…

SPIN: …But you DID have SO much to do with Van Halen and their sound; you made every record with them. I think it’s accurate…
Ted Templeman:  I just thought it was kind of a weird headline; I mean, they were there before me. I was not in the band. They were a group before I signed them. Yeah, I noticed [them] because I lived in Pasadena [as did the band]. So we rehearsed in Dave’s basement to get ready for [the first record]. I went in and worked through the tunes with them there. And also the fact that  I got to be really good friends with them over the years, I think because Al and Ed [Van Halen], the two brothers, would spend New Year’s Eve at my house, every New Year’s.

A huge party or just you guys hang out?
They were the only ones. My wife. My kids went to bed early. I had a Ramirez guitar that I bought in Spain, and Ed worked out a thing called “Spanish Fly” on that guitar over my house. Dave lived over right off Orange Grove.

Again, I know you don’t like hearing it, but you are one of the few producers who really has star status and tons of his own fans.
Nah, you know, it’s kind of like if you look at somebody on stage and they had a really good lighting man. It’s the talent they’re shining on. Honestly, you know. I did whatever it took…like on the Doobies “What a Fool Believes,” in order to get it done, I played the drums. Donn [Landee, engineer and close friend] would say, ‘You know what you want, so go play it.’ A lot of people don’t know this, but all the backgrounds of Van Halen, almost every single one of them, would be Mike and me and Ed; I would double Ed because his voice wasn’t strong enough. That’s not in the book.

Wow. People debate about that online; who is singing the high parts, especially.
That’s Mike [Michael Anthony]. Mike was a big part of that sound, that California metal sound. His voice gave it that youthful sound. I couldn’t sing that high. As I said, I would double Ed’s parts on most backgrounds; not all of them, but a lot of them, like “Dance The Night Away,” that would be me and Ed and Mike. Another thing, I don’t think I talked in the book about it much, but Al [Alex Van Halen] was really great. He played like a metronome. And also he was almost like an associate producer, he’d tell me outside, “Why don’t you have Ed do this…” He was really helpful, record after record after record. Then when we moved up to Ed’s I got uncomfortable up there because Ed would get up and start drinking immediately. That’s why I went with Dave and did that EP [1985’s Crazy From the Heat]; I figured I’d give Ed time to clean up his act. Then I did Eat ‘Em And Smile [Roth’s 1986 solo debut LP]. I always figured it would help put Van Halen back, to make them work again. Dave’s not the easiest guy in the world.

Surprise! Compared to Van Morrison though? Don’t they share that similar lead singer gene?
No, no. Van is a sweetheart, just real nice but you couldn’t understand he was saying half the time [due to his Irish brogue]. He came down when my wife was in childbirth; he came to the hospital. He grew up in the streets of Belfast fighting, so you never mess with that guy. But I loved recording the live album in London with Van [1974’s double-live It’s Too Late to Stop Now]. It was so exciting; he had never been back there since he’d been in the group Them and so what he did “Gloria” the whole Rainbow Theatre was pulsating. It was unbelievable. I was always overwhelmed by his talent. That album, I think, showcases his singing talent more than any record he ever made. I also played keyboards on “Tupelo Honey.”

How did you come to work with Aerosmith on Done With Mirrors?
Actually, they saw me on the Grammys in 1980 when I won the Grammy for Record of the Year for “What a Fool Believes.” And they said, “We want that guy!” I went to Boston and rehearsed. Their management didn’t want them to record in L.A. or in San Francisco because they might score [drugs], so they made us record in Berkeley [at Fantasy Studios]. They scored in five minutes anyway. But, you know, I just didn’t do a good enough job with it. I let them down on that record. I just didn’t get it. I did Sammy’s [Hagar] I Can’t Drive 55 record up there, but I wasn’t very familiar with the studio. If you don’t know the studio, it’s really… I don’t know how to explain it. A great engineer though; Jeff Hendrickson. I worked with him at the Power Station in New York. I didn’t sleep well, I didn’t get the best drum sound for Joey [Kramer]. I didn’t get the best out of Steven [Tyler] at all. I mean, that record didn’t make it because of me.

It got pretty good reviews, it just wasn’t a big seller.
I just could have done better. The next one [1987’s Permanent Vacation] was a huge success. They’d asked me to do the next one. But I was scheduled to do a David Lee Roth follow-up to Eat ‘Em and Smile. With Dave, I had hits with him from the first EP, we did “Just A Gigolo.” So, Eat ‘Em And Smile sold the same Van Halen. Roth was selling out the Forum [in Los Angeles].

My goal was to put Van Halen back together. But anyway, I called Dave up. I said, “Listen, Aerosmith asked me to do the next album.” I wanted to redeem myself. But they needed to do it, I think, in April or something. And Dave was slated to do a record too. I drove over to Dave; he had a funky little office. He said, “Yeah, I think I need a new producer.” I said, “Fuck you, I already turned down Aerosmith to do this record.” I’d previously asked him: “Are we still on to do the next record?” He says, “Yeah.” And then he decides to fire me. So I lost the income from the Eat ‘Em and Smile follow-up and the Aerosmith album, but I mainly wanted a shot at doing right by [Aerosmith]. From that point on, I never liked the guy [Roth]. I had no use for him, you know? Prick. I mean, he was perfect for Van Halen, they never would have made it without him, those lyrics are genius and his crazy non-singing … I mean, it did enter my head to get Sammy because Sammy’s such a great singer, and Ed wanted me to borrow Ronnie Montrose’s Marshall head — I didn’t do that. But Dave, once I got in there, I knew there’s a lot of smarts going on; he’s really really smart.

You’re still good friends with a lot of musicians you’ve worked with over the years, which says a lot about you….
Yeah, Mike [McDonald] is the sweetest guy in the world and one of my best friends. We would get in terrible trouble on the road. I got the end of a letter he wrote to me, because I said, ‘remember at that time at the St. Francis Hotel?’ He said, ‘Ted, the St. Francis Hotel is one of our many on the road escapades. When we’re in hell on our knees, shoveling fecal matter, and the voice comes over and says “coffee break’s over assholes, back on your knees,” we’ll know how we got there.’

Mike is very funny, you know. I would rehearse the Doobies on something; I would get them to work on their parts for maybe an hour or so. I’d work out the drum parts. Then I go back in the studio–I got this stuff on tape. When, at the top, I’m saying to the band, “Okay don’t forget, you come in here; remember your part? You come in here…”

And Mike says, “I think I speak for the whole band when I say ‘go fuck yourself .”