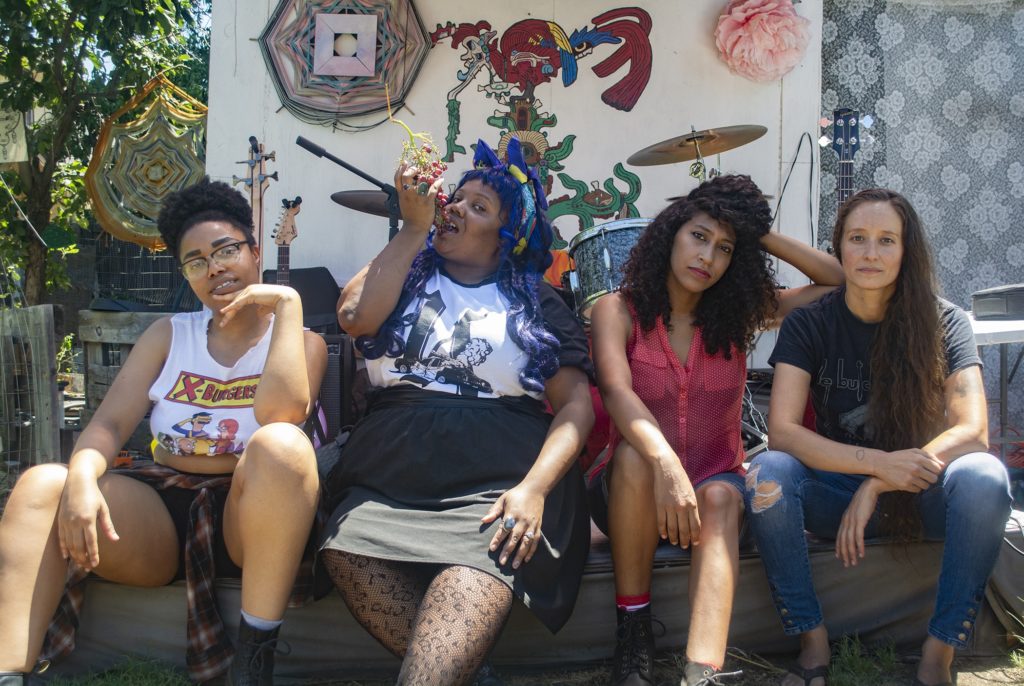 Eight years ago, Amber Williams was an eager fangirl waiting in line to meet punk icon Alice Bag at a Los Angeles LGBTQ center. The moment still resonates: “I remember telling her that I wanted to start a band, and she signed my copy of Violence Girl, and she’s like ‘Just do it,’” Williams tells SPIN.

In 2017, Williams and her friends started Squid Ink, a Fresno-based, riot grrrl-inspired punk band comprised of Black women and women of color, whose songs reflect the politicized nature of their marginalized identities.

“I knew that if I wanted to start a band now, it would be a thing where I can talk about my experiences as a Black woman,” Williams says.

Squid Ink has spent the last three years doing just that: releasing music, playing shows and festivals throughout California, and eventually opening for Bag at a 2018 gig in Fresno. Bag also recently featured Squid Ink in her music video for “The Sender is Blocked,” and Williams was asked to direct it. “It was full circle — to first play a show with her, and then her later asking if I would direct a video for her,” she says.

The quartet features Williams on vocals/guitar, Audrey Johnson on drums, and — in a twist on the conventional rock band format — both Janell Bowen and Vishinna Turner on bass. (Johnson and Turner also play in Fatty Cakes and the Puff Pastries, whose self-titled album was produced by Bag). And Squid Ink’s name came from a scientific fact that perfectly represents their power as Black and brown women: “Squid — when they squirt black ink into the face of something that’s trying to harm them — that’s actually melanin,” Turner says. “So literally, they protect themselves with melanin, they protect themselves with their blackness.”

The band members’ backgrounds are multi-faceted  — Turner is Black with Choctaw and Blackfoot ancestry, Johnson is Black and Mexican, Williams is Black, and Bowen is part Mexican — but their shared commonality as disenfranchised people united them to address anti-blackness, white supremacy, transphobia, sexism, and racism. “When Amber explained what she wanted the project to be about, and what she wanted to write about, I thought it was very important,” Bowen says. “I personally like music with a message, it’s really inspiring.”

Some songs channel raw anger at white power in the United States. “Sundown” connects modern gentrification to American towns that threatened and prevented Black people from going out at night, while the angsty “1920” appears simple at face value but has a deeper meaning: “I wrote it right after I read an article talking about how half a million women joined the WKKK in the 1920s,” Williams says. “Eventually the KKK wasn’t as popular as time went on, but just knowing that half a million women joined this — they didn’t just vanish. They went out, and they were probably in education, probably in the medical field, etc.”

But Squid Ink aren’t just political — they’re helping make punk, a scene still dominated by white men, more inclusive: “I didn’t feel comfortable at shows,” Williams says. “I didn’t really go out to shows much, being the only Black person in the crowd.”

Williams feels punk rock has been “isolating” for Black people: “I love riot grrrl, I love punk, I love grunge, but I definitely was not gonna see people who look like me, or see people singing songs that dealt with things that I was going through in particular,” she says.

Turner and Johnson agree — and believe the punk scene is also full of anti-Black racism. Turner says people in Fresno have tried to erase Johnson and Turner’s contributions to Fatty Cakes and the Puff Pastries by referring to the two musicians as “tokens.” “It is just always this scene where it seems like we have to ask for permission to be there somehow, or we have to stand in the back, or we have to be seen and not heard,” Turner says.

And on multiple occasions, Johnson has dealt with people joking about her Black identity, like at a show she played with a former band when she was 18. “I remember a guy screaming out into the crowd, ‘She’s so good and she’s black and a girl!’ And everybody just busted up laughing and thought that was so awesome or whatever,” Johnson says. “I think it’s so weird that people just think that first of all Black people don’t play drums, or any instruments at all [in punk].”

Squid Ink refuse to be subjugated, and they’re proud of their presence in the scene. They’ll be playing a virtual set for the Multivrs is Illuminated Fest on Aug. 8. And new music is coming too — they’re recording their next EP, Under Siege 2, and releasing a new single, “The Real Beat,” this summer. True to their mission for social justice, Williams says the song is about transphobia and cis-women’s complicity in the violence against trans women.

“It’s time to get uncomfortable and have those conversations, support the lives and well-being of trans folks who are here, and do the readings to un-learn the cis-hetero patriarchal, white supremacist, capitalist world we were socialized into, because it’s all connected,” she says.