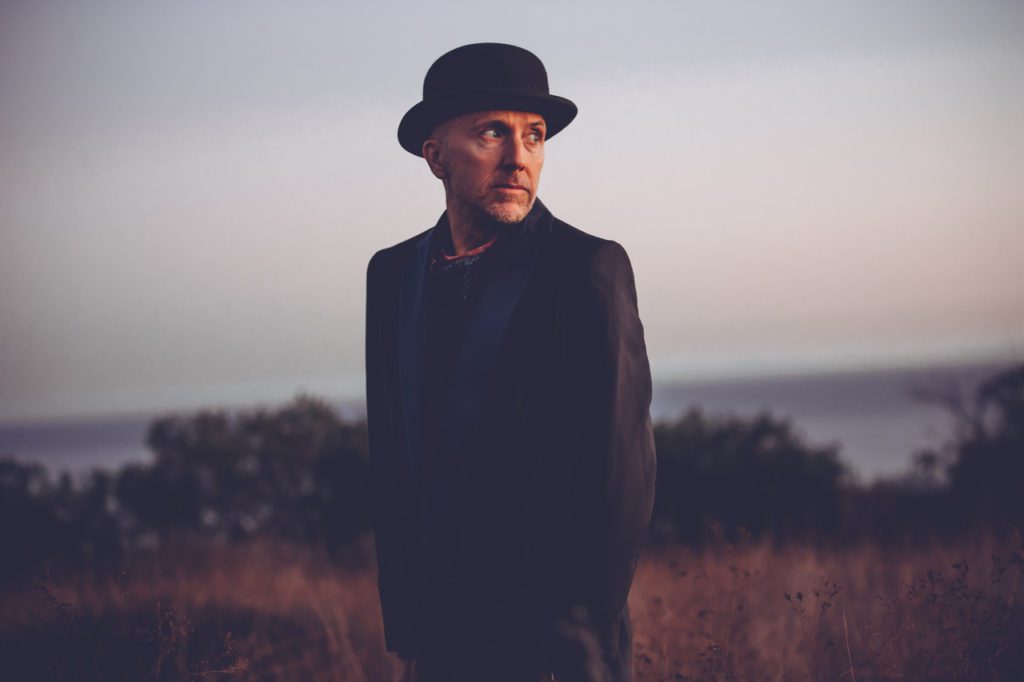 Lee Burridge is a visionary artist/producer and traveling pioneer. With an effervescent attitude and an ever evolving passion to innovate, he aims to keep exploring the inner workings of humanity and inspire interconnectivity through his music. From humble beginnings to most currently celebrating the 10 year anniversary of a dream event that became reality – All Day I Dream, Lee goes back in time with SPIN to recount everything in between and lift the veil behind his musical identity.

Who is Lee Burridge and what do you stand for?

A DJ who’s been playing music to people since 1983 and, for the last ten years, a truly passionate artist who has been focused on creating, developing and supporting melodic house music through my All Day I Dream events and label.

You’ve established yourself as a sonic traveler and mastered the harmony between soundscapes and landscapes. Describe the evolution of your sound from your humble beginnings in 90’s Hong Kong to igniting the desert floors at Burning Man today.

I’ve always been drawn to music that has an emotional thread to it and that took you on a journey. Back in HK in the 90s I was exploring how to create that kind of a journey by weaving together a lot of different drum intensities rather than the way I let the music flow now. I used to program the peaks and valleys on the dance floor by playing either faster or harder at certain times. I didn’t really find that to be very challenging eventually so began to approach it with a different mindset. Take for example a sunrise set at Burning Man. The musical vibe and/or melodic elements of the track rather than the groove (the groove is all important to me but to maintain flow) begin to build on each other. They slowly entice and entrance the listener on an emotional level. Each one building towards specific moments of release. Tie in the surroundings and the collective energy of the crowd and you truly become part of a magical and emotional intensity that, at times, has people crying. The crowd becomes so in tune with these emotive and beautiful feelings certain tracks emit that they can truly let go. It’s amazing to see the power music can have if you let it in. I feel truly grateful to have found a corner of dance music where I can express my honest feelings and emotions through my track selection. It’s total freedom to play in this honest way.

Was there a definitive turning point to your success? When did you realize the magnitude of your impact within the industry/community?

There have been a few key moments actually. The first was being handed a business card that led to my full time job as a DJ in Hong Kong in 1991. I was able to start to develop as an artist and begin to mature as a grown up person. After that, meeting Craig Richards and Sasha (on separate occasions) in HK and forging those friendships gave me the opportunity in 1997 to return to the UK and find a place for myself in the scene. We were all a part of a project called ‘Tyrant’ that really shone a spotlight on me as an emerging new artist in the UK. Global Underground came next. It was a fairly well respected mix CD series that opened a door globally for me. I’d say the balance of the Tyrant residency at Fabric with Craig (for six years) as the club itself flourished alongside the GU mixes allowed me to travel and play all sorts of locations globally and gave me credibility . After that things started to slow down for a few years as minimal techno took over. The scene I was considered to be a part of sort of fell apart  but it gave me time to reflect and explore. After a while I found music I was passionate about  and also saw certain things I considered were lacking in the dance music experience as a whole. I felt music with an emotive edge had disappeared. No one was playing a long set anymore so the whole ‘journey’ experience a DJ could take you on had been lost. There were so few girls attending events too which really didn’t feel right. I didn’t really notice it happening but as I’ve been doing this for quite a while I guess I’ve experienced and know quite a lot of things about my industry. I saw quite a lot of things I didn’t think were right so decided that instead of waiting for other people to make things happen for me that I would make it happen for myself and, eventually hopefully, other artists I believed in. This was when I started All Day I Dream. I made some mistakes but the concept and intention came from a  pure place. I guess once I started seeing the impact the label and events had on people (artists and fans) and how many other events began to adopt the aesthetic and sound I was playing that it felt like something important had happened. I fully intended from day one to ’try’ to encourage others to play, make or dance to the music I believed in. I’ll always be proud that it’s grown in the way it has and that we are still out there exploring and pushing this vibe.

With all the inspiration you’ve gathered from different environments that you’ve encountered throughout your career, you were able to create a world of your own – All Day I Dream. Where/When did this concept first take form, what sparked it, and what has it grown into today?

Musically the tipping point moment for me was 2007. As I just mentioned I wasn’t really resonating with the minimal techno scene. I found myself trying to fit in but I wasn’t being authentic. I decided to search for music I really loved. I started discovering disparate releases from different smaller artists that felt like they had a thread between them. That being, their melodic elements or feeling. After a while I had enough music to play a set and make a mix. There really wasn’t enough new music to go out every week and play new tracks at these parties so I looked back into my collection for certain older tracks that also fitted the vibe I was trying to create. I made a mix called ‘All Day I Dream of Her’ that I gave to friends (all girls) who loved it a great deal. It was eventually released as my RA podcast. I started exploring the reaction to this music at bigger events such as Lightning in a Bottle festival. No one else was doing this that I knew of and, initially, I wasn’t sure how people would respond but the more I played this way the more people started being drawn to it. I played a few sets at Burning Man too (the big sounds out there at that point were dubstep and electro house) and it seemed to really resonate with the place itself and actually felt magical. You could see the joy it brought out of people. On July 4th 2010 I played in New York on a rooftop. The roof itself was amazing but the production I felt was lacking. There were speakers, equipment and a bar and an amazing view of Manhattan. That was it. The party was great after the sun went down but before that it was intensely hot and uncomfortable. It was super industrial due to the stark warehouse roof space . I thought about that event a lot in the coming months and decided that I wanted to do my own event there but approach it differently. A year later I held the very first ADID events on the same roof but created a colourful and more artistic aesthetic. No one was really putting money into producing events in this way. Everyone was cutting corners and trying to make a few dollars more. I decided to invest. I rented a D&B sound system that was way too expensive (i felt as the music was detailed and had feeling that you needed to hear and feel it fully) and myself and two friends who helped create the first events started integrating organic elements such as flowers and bamboo as well as bright coloured material that moved with the wind. I’d seen certain art pieces at Burning Man where the contrast of colour with the neutral surroundings made things pop. Bushwick is a pretty industrial area and I thought integrating color and warm textures would help create an atmosphere. Add in the emotional musical journey and an amazing crowd and this was the first step forward for ADID. I never wanted to force the growth of the party so over the years allowed it to grow through word of mouth. I fully believe in the experience which is why today we still have a lot of the same people who were there at the beginning coming to the events around the world. The parties have got bigger but the feeling is the same. It’s a community and everyone who’s there is as important to make it feel the way it does as we are. I’m blessed that it’s popularity has reached so many different places in the world yet everywhere we go the feeling is that same beautiful vibe we’ve had since day one.

“Set and Setting” – What does this phrase signify to you?

It means something very different to me now than it did in the 90s when it involved acid and Thailand haha. These days I relate it to what kind of musical journey I’d create depending on the location I was playing. What set I’d play in what setting.

Despite the curses 2020 brought to the collective masses, what was the biggest lesson you gained and how are you planning to propel your career forward in 2021?

It made me realise I was missing out on other really important quality of life experiences that going at a million miles an hour doesn’t allow you to have. Career wise in 2021 I feel we will all still have a way to go and to try to be patient and not expect a great deal to return to the way it was pre-covid. Not yet. All Day I Dream will continue to explore other ways to share the music with our existing fans as well as hopefully attracting new ones. We are lucky to have the radio show on Sirius FM as well as the weekly streams online every Sunday. I’m not sure we will be ‘propelling’ anywhere soon but are definitely preparing to come out the other side of this monumental and difficult human experience with a beautiful landing pad for people. Like in the 1920’s after the Spanish flu people are going to want to be with each other and also going to want to have fun again. We are ready to bring happiness into people’s lives with our community.

Is there anything on the horizon that you can share with us?

An app like Bumble or Tinder called ‘All Date I Dream”…ok, that’s a joke

What do you wish for the future of electronic music? In what ways would you like to see it evolve?

I think it’s important to encourage people to continue to explore and support new and emerging artists. I’d like to see more of the ingrained and successful artists support that talent rather than use it to bolster their own careers.

Get transported to Lee’s dreamland and watch his set below. Can’t get enough of Lee Burridge? Be sure to check out his most recent EP here. Want more SETS? Head over to SPIN TV to keep up with all the latest and greatest DJs breaking the electronic charts.