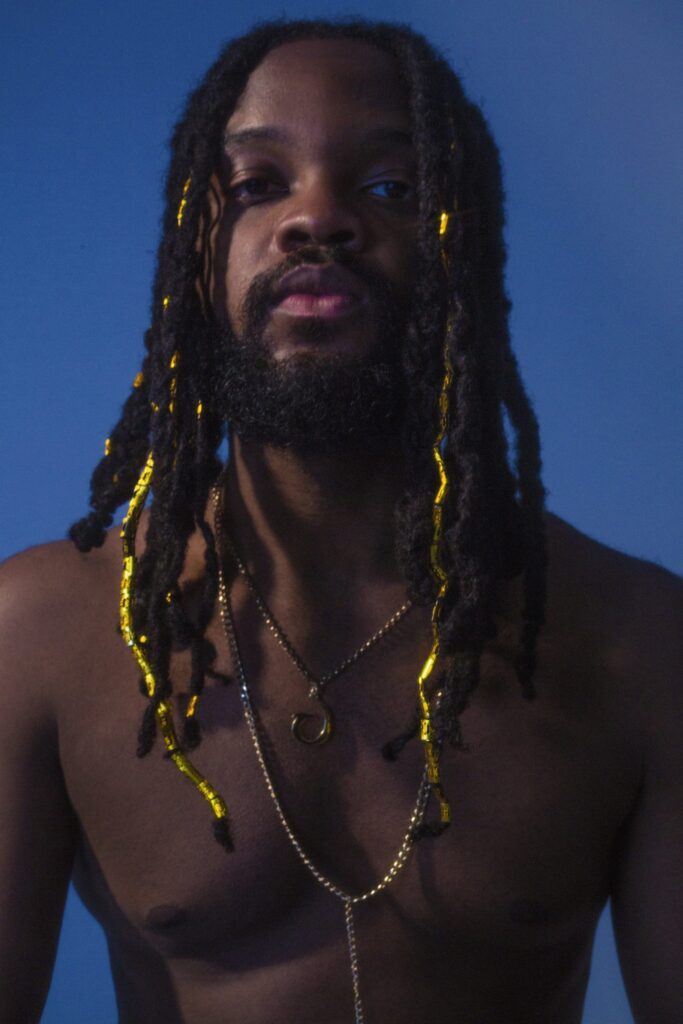 Equal parts musical shape-shifter, limitless creative beast, badass, humorous and undefined, Genesis Owusu is a little bit of everything and everyone. This Daybreaker has come onto the scene with a monstrously diverse and impactful project, Smiling With No Teeth, which has quickly positioned him as an ambitious artist with mass potential to be a true pioneer in today’s music scene. Part of what contributes to the charm of Owusu’s sound, is his philosophical approach towards music making. This can be witnessed through dynamic and layered storytelling, along with purposeful and soulful delivery of the inner thoughts being explored within each song. There’s an invitation for the listener to join in the conversation and surrender to the experience with him, indulging in the universe known as the human perspective. Each track is saturated in unapologetic emotional expression, conveying the value of individuality that Owusu strongly prioritizes; a key as to what makes his work so memorable and timeless.

SPIN caught up with the rising visionary about the significance of his debut album, his artistic ethos, building creative courage, and more. Listen to his latest release, the deluxe version of Smiling With No Teeth, Missing Molars here.

Who is Genesis Owusu and how did you come to life?

Genesis Owusu is me, and my parents did some shit that I don’t wanna talk about.

Tell us about your sound – where does your non-conforming style originate from and what have been your biggest visual, social, and sonic influences?

My style just comes from my upbringing. Being a Black kid in an extremely white city, all the kids at school wanted me to either be 50 Cent or Eddie Murphy. But I am Kofi Boateng Owusu-Ansah, baby. Everything I do is three-dimensional; Genesis Owusu isn’t a character with a catchphrase or a caricature of anything, I am a fully realised Black man who will celebrate that Blackness at every turn without being restricted by it. My style developed as a protest to whatever anyone else thought I should be. My biggest influences have been my dad, Pharrell Williams, Kanye West, Malcolm X, anime, a 2002 Xbox game called Jet Set Radio Future, and flared high-waisted pants.

The process is to throw out whatever feels comfortable and to dive into some new shit; what’s done is done.

How do you perceive success? When did you realize the magnitude of your impact within the industry?

It’s super important for everyone to recognise that the definition of success is nebulous and individual. I don’t think winning a Grammy will make me feel successful, even though that’s the case for some other artists, and that’s okay. Success for me is being able to make whatever I want with no boundaries or restrictions, and being able to live comfortably from that. As for my magnitude in the industry, it’s still a hard thing for me to recognise, especially after being inside for so long and for so much of my reception to be relegated behind a phone screen, not being able to see much of it in real life. It was pretty eye-opening selling out a 22-show tour around Australia. Even then, I forget about my reach outside of Australia these days; I’ll post on Instagram about something coming out at 6pm, and I’ll get a bunch of replies asking which timezone I’m talking about.

You came out with a sonic boom with Smiling With No Teeth, and now, Missing Molars. These projects are undeniably an eclectic array of genres blended with finesse, that manage to still tell a clear and cohesive story  – Can you elaborate a bit on this universe you created and the ideas you were reflecting through your songwriting?

I tried to achieve a lot with these projects so they’re kinda dense. Essentially it’s a foray into my demons (depression and racism), my sense of self internally and how I fit externally. These demons are personified into characters known as the Black Dogs, with their own personalities and motives, and they both encompass different halves of the album, interacting with me as a separate character, and interacting with each other as well. These topics of depression and racism are ones that are so ferocious, yet for the longest time, no one would want to address them with me. They had to be sugar-coated and watered down so people would feel comfortable enough to dive in. This is why Smiling With No Teeth sounds the way it does, and is titled what it’s titled; it’s sonically upbeat, funky, fun and sexy so much of the time, sugar-coating the lyrics and the layers going on under the surface, pretending things are okay when they’re not and presenting a fake, incomplete smile – a smile with no teeth.

You’re a true testament to building a career without needing to define yourself by constricting your artistry to fit inside of a box – To what do you owe credit to for building your creative courage?

Knowing why I do what I do is the most important thing to me in that regard. I have to remind myself of it from time to time when things get a bit hazy. Simply put, I do what I do to express the entirety of myself. The weird, the wonderful, the disgusting and depraved, all of that. Sometimes it’d be more financially or socially beneficial for me to stick to a certain lane, do what I know works well and play it safe, but that’s a direct contradiction of who I am, and I would feel like a fraud for doing so. I’m creatively courageous because I wouldn’t be able to live with myself as an artist if I wasn’t.

In what ways do you wish to inspire up and coming artists that are aiming to get their creative work out into the world?

I would hope to inspire them to be them, unapologetically.

You’ve quickly piqued the interest of the music sphere and it’s safe to say that all eyes are on you – what’s next for Genesis Owusu?

Who knows? It’s all a rollercoaster and I’m in the front seat with the rest of you. That’s what makes it exciting.

Take a chance now and manifest something:

The pandemic is going to cool down very soon and my world tour is gonna be poppin’.

Any last words for the SPIN-verse?