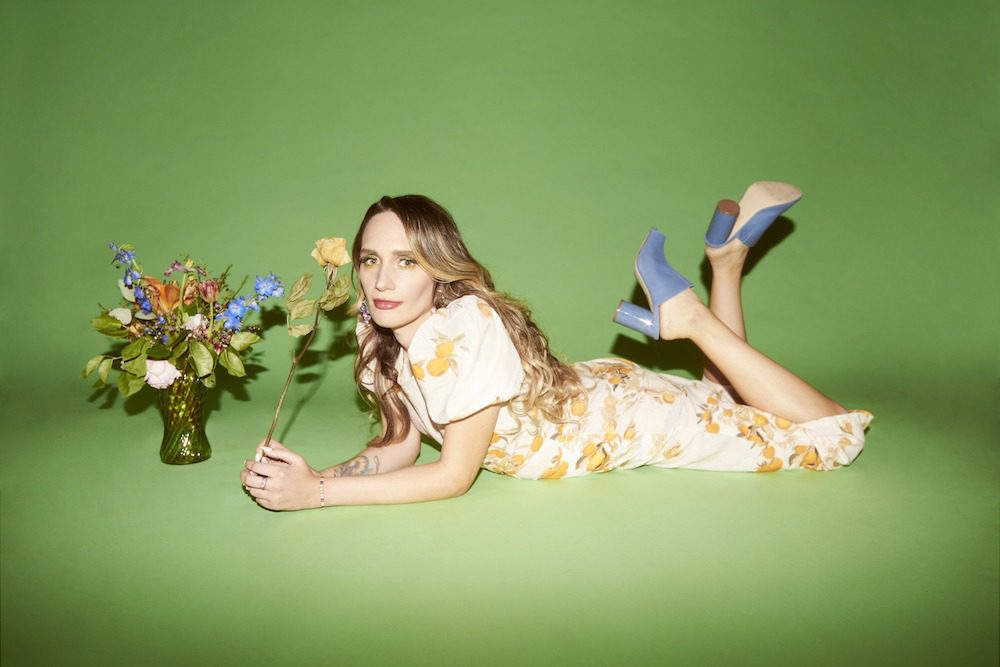 Whether she’s fronting her longtime indie-rock band Speedy Ortiz or going solo under the more pop-leaning Sad13, singer-songwriter Sadie Dupuis has always been fascinated by ghouls, haunted houses and the unknown.

“Even from the earliest Speedy stuff, there’s a lot of Tarot and ghosts and the occult,” she tells SPIN.

On her new Sad13 album, Haunted Painting (out Sept. 25 via her label Wax Nine), she chases ghosts of her own. For many years, Dupuis worked a prolific clip, constantly touring and releasing a record every year. Her father passed away prior to Speedy Ortiz’s second LP, 2015’s Foil Deer, and several friends died from overdoses. And she admits that working hard for so long provided an excuse for her to avoid processing grief.

“At some point, it was sort of time to work on new music, and I was just not interested at all,” she says. “It seemed really daunting and overwhelming to me. I had a couple of friends pass from overdose within a month. I think three people I knew died of overdose, and I was just really struggling to reconcile and to accept that.”

Dupuis adds, “I think when you are grieving someone that often you do feel kind haunted by those feelings, those sort of obsessive feelings of regret and loss.”

While therapy sessions certainly helped, a trip to Seattle’s Frye Art Gallery proved to be creatively healing. After unsuccessfully finding proof of phantoms in a nearby hotel, she decided to try her luck at the art gallery. Among the curated collection of 19th and 20th century oil paintings, one in particular caught her attention: the 20th century portrait of the dancer Saharet by German expressionist Franz von Stuck. She noticed the women in the paintings had dark undereye circles that looked “pale and ghostly.”

“That can be sort of what it feels like to cope with depression or grief,” she says.

She immediately related to the artwork, which felt oddly similar to her own seemingly cursed emotions. It inspired her to uncover why she avoided her feelings, in turn giving her confidence to start writing songs again.

The album features deeply personal tracks like “The Crow,” which she wrote last year after hearing the news of musician-poet David Berman’s sudden death.

“It can feel very helpless when you lose someone whose work you admired. Especially having lost so many people who have died by suicide,” she says. “That was [what] I started writing the song about — when your coping mechanisms are art and when the artists that you admire so much don’t stick around, it can be hard to process.”

However, she still gets lighthearted on “Ghost (of a Good Time),” poking fun at her partying habits. Unlike her 20s, when she could celebrate long into the night, she’d rather just hang out and talk to friends.

“At this point, the thing that’s most fun to me is doing something inside the house with friends. I think maybe getting to bed at like 11:00 p.m.,” she says. “It made it at the very end because I was like, ‘I love party songs, yet I hate the party. Let me do a song about that.’ I think it was kind of funny to have a lead single that’s about being in my ‘30s and not really enjoying going out to bars anymore when suddenly no one should be going out to bars anymore.”

While she quickly recorded 2016’s Slugger at home, Dupuis took her time crafting Haunted at six studios around the country, including Tiny Telephone in San Francisco and New Monkey Studio in Van Nuys, Calif. And Dupuis took advantage of that setup, expanding her usual instrumental repertoire (guitar, bass and synth) to include organ, lap steel, marimba, glockenspiel and sitar.

“I think it’s a lot more ambitious than any record I’ve worked on just in terms of the instrumentation alone,” she says of the album, which also features drummer Zoë Brecher, an eight-piece orchestra on two songs and guest vocals from Helado Negro’s Roberto Lange, Deerhoof’s Satomi Matsuzaki, Merrill Garbus of tUnE-yArDs and Pile’s Rick Maguire. Dupuis is most proud of assembling an all-women production team, including Sarah Tudzin, Erin Tonkon, Maryam Qudus and Emily Lazar.

“I specifically found women to work with on this record partially because women in production are so underrepresented. But also, I just had a number of people whose work I was a fan of,” she says. “I think also as someone who’s not male who works in production, it can be frustrating when you see the people who are the most outspoken about feminism and hiring of women in music, [and then] you look at their engineering credits and it’s all men.”

This desire to impart change extends beyond her music. In addition to helping poets through her label’s poetry journal and musicians through various organizations, she raises awareness about opioid addiction through organizations such as Harm Reduction Coalition and Prevention Point. (She’s held fundraisers at every tour since 2016.)

Dupuis hopes her words and actions provide a guiding hand in processing and preventing an epidemic.

“Everyone I know has lost too many friends to overdose,” she says. “So I’ve worked on having anti-overdose medication available at our shows, as well as distribution of it and training and other services as a way to try to normalize these concepts…We could save a lot of lives that don’t need to be lost if more people were educated.”