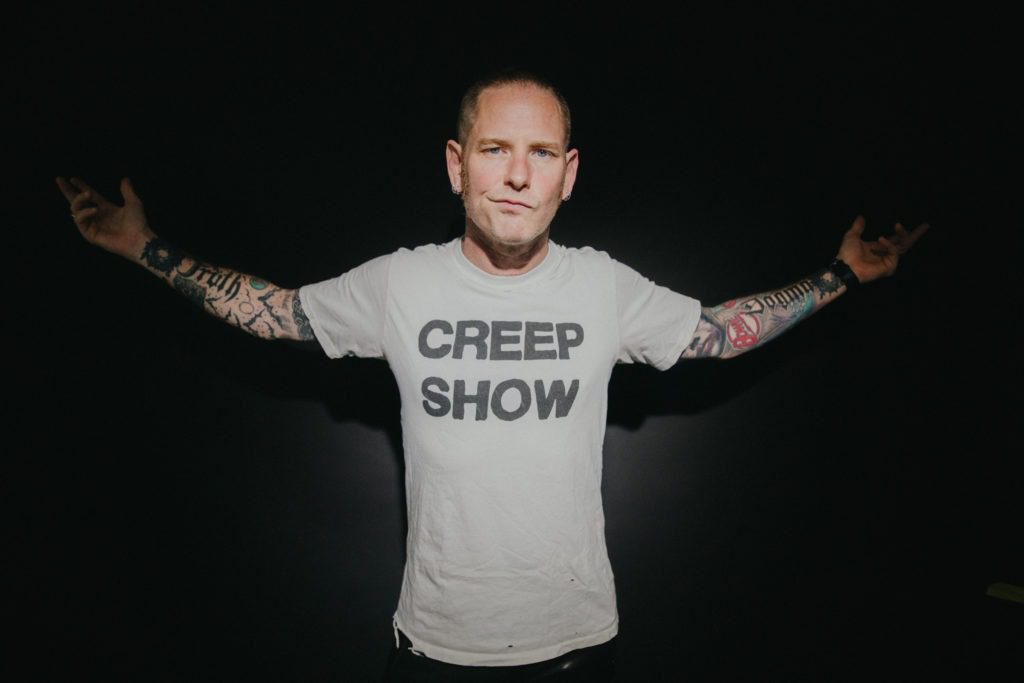 For many years, journalists have been asking Slipknot and Stone Sour frontman Corey Taylor not if but when he’s going to take the plunge and record a solo album. And until about a year-and-a-half ago, Taylor usually dismissed the question without giving it much more thought or insight.

“But it kept coming up, for some reason, and so the more I started thinking about it, I was like, ‘Well, what the hell would it even sound like?’” Taylor tells SPIN over the phone. “I had kind of stockpiled these songs I’d written over the years, and I realized, ‘Oh, it would sound like these songs.’”

If those asking were intentionally trying to subliminally plant the solo album idea in Taylor’s head, well, it worked. On Oct. 2, Roadrunner Records will release his first set of solo material, in the form of CMFT.

“Honestly, it was something I hadn’t put a lot of thought into until the last couple of years,” Taylor says, “but then, when I did, I realized I was really, really prepared for it.”

Taylor told everyone who would be involved in the sessions “to quarantine for two weeks. I said, ‘Stay the fuck away from everyone and anyone, social distance … do everything and when the time comes, drive into Las Vegas. Don’t fly.’ We did it right. And once we were in the studio, we stayed away from everybody, and had no real contact with the outside world.”

Over two-and-a-half weeks, Taylor and his imposing backing band ripped through 25 tracks. CMFT will feature 13 original songs, including “Black Eyes Blue” and the collaborative “CMFT Must Be Stopped,” featuring guest appearances by Tech N9ne and Kid Bookie. They also recorded several B-sides: six acoustic versions of Taylor’s originals and six covers, including “Lunatic Fringe” by Red Rider, “On the Dark Side” by John Cafferty and the Beaver Brown Band, “Shakin’” by the recently departed Eddie Money, and “All This and More” by Dead Boys.

Taylor says he has enough material written for two more solo albums, but no plans yet to record those songs.

“The plan is to drop this and do some virtual stuff,” Taylor says. “Maybe some weird social distancing shows in the near future or whatever. Just seeing what can happen — regulations applying, obviously. The plan is next year, once things resume, to wrap up touring with Slipknot and then, once I’m done taking care of all my affairs with Slipknot, go back into the studio, record the second one, and then go out and tour on two albums instead of just one.”

When asked about working with his backing band on his own songs (as compared to a Slipknot album), Taylor said it was “an absolute pleasure.”

“Making a Slipknot album sometimes can just be such a fucking pain in the ass,” he continued. “There’s something to be said about the creativity of tension, but at the same time, people never talk about the creativity of just chemistry. And the guys I’ve got in my band, I’ve known most of them going on 20 years. We’ve been friends for a long time, played together in various projects going all the way back. They were specifically picked for this because I knew they could handle it. They are so talented and so underrated, and I knew that this would allow them to shine. And we laughed every fucking day. It was just an absolute gaggle of idiots making a fucking awesome rock album. It was just so stupid, dude.”

The experience, he says, “reminded me of making the first Slipknot record, ironically. We were green, young, dumb as hell; we were up on a mountain, surrounded by paradise, and we had fun. That’s what this felt like to me.”