Slash on His Love of Pinball, Making New Music While at Home 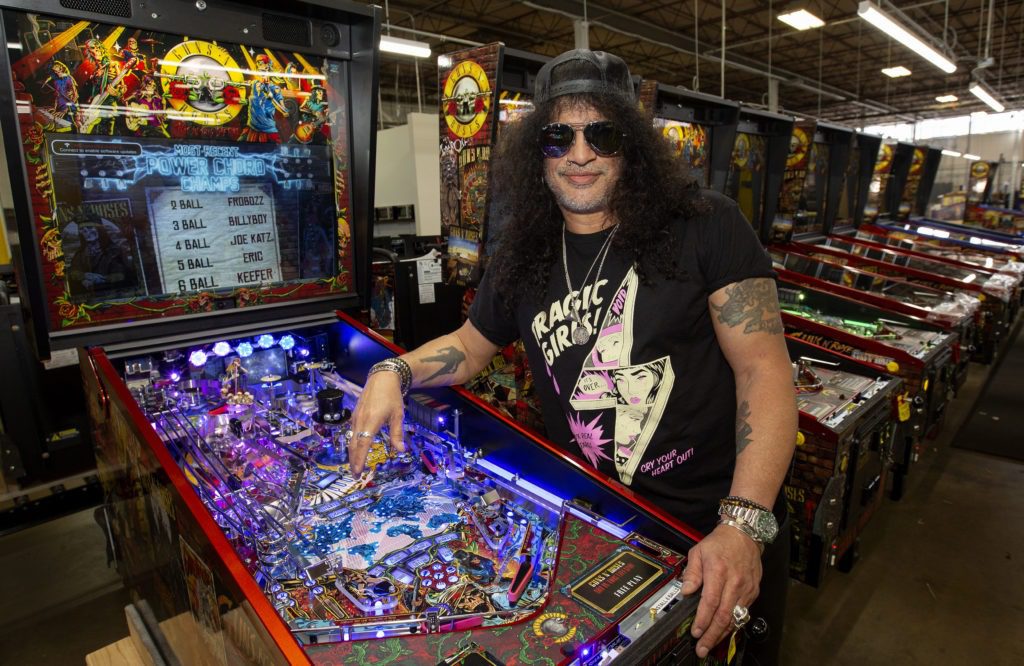 “The idea behind the whole thing was basically to recreate a full Not In This Lifetime concert experience,” Slash tells SPIN, then laughs. “You know, I sound like a fucking salesman now…”

Perhaps so. But at least the product the guitarist is promoting is a pretty killer one — the new Guns N’ Roses Not In This Lifetime pinball machine. Make no mistake: While plenty of artists — everyone from ‘70s rockers KISS and Ted Nugent to more recent subjects like Metallica, Iron Maiden and AC/DC — have lent their names and likenesses to pinball machines over the years (Guns N’ Roses did it in 1994 as well), none of them jumped into it with as much enthusiasm and know-how as Slash and company have.

A collaboration with industry leader Jersey Jack Pinball, the Not in This Lifetime table is a ridiculously rich and tech-forward gaming experience. As GNR’s representative pinball wizard, Slash worked closely with Jersey Jack designer Eric Meunier for more than two years on the project: helping to craft specific game plays and actions, recording original guitar riffs and sound effects.

The game itself presents, essentially, a complete show from the band’s record-smashing Not in This Lifetime world tour, with 21 GNR tunes blasted through a 120-watt, 2.1 stereo sound system and accompanied by custom animations and hours of tour footage and video assets taken directly from the stage show. There’s also original voiceover work from Slash, Axl Rose, Duff McKagan and the rest of the Gunners; hundreds of interactive LED lights, multiple LCD displays, Bluetooth connectivity and hand-drawn artwork, along with personalized touches like a Slash top hat sculpture, guitar-pick-shaped spinners and a ball ramp constructed from drummer Frank Ferrer’s actual sticks.

What’s more, a limited edition version of the table packs in even more custom art, playfield designs and LED lights, as does a super-limited collector’s edition, which is emblazoned with Appetite for Destruction cabinet art and signed by Axl, Slash and Duff.

Why go to such extreme lengths? To make, as Slash puts it, “the coolest fucking rock ‘n’ roll machine that’s ever come out.”

Slash spoke with SPIN to talk about that cool rock ‘n’ roll machine and also to bring us up to date on what’s happening with Guns N’ Roses musically. To be sure, even as the concert industry remains in COVID shutdown, the band has announced a spate of new tour dates for November 2021 in Australia and New Zealand. And while Slash says he can’t wait to get the “green light” to head back onstage, he’s been making good use of the time off from the road, working on solo music as well as new Guns N’ Roses material.

As for when we might hear that new Guns music? The jury’s still out. But we’ll venture to say, at the very least, it’ll be in this lifetime. SPIN: How did the Not in This Lifetime pinball machine come together?
Slash: I spearheaded the last Guns N’ Roses pinball machine, and I started thinking that I’d really love to do another one. I was familiar with Jersey Jack through their Wizard of Oz pinball machine, which is one of the most beautiful and unique pinball machines I’ve ever played, and so at some point in 2016 I called them up and I said, “Hey, I’d really like to do a Guns N’ Roses Not in This Lifetime machine and just pull out all the stops.” And it wasn’t too long after that that we got into it. But the idea of doing it with Jersey Jack was because they’re so cutting-edge and so “boutique-y,” in a way, because they put so much time and care into the machines and they don’t just churn these things out. They’re all handmade and done very meticulously, and the designs are very original. And that’s what I wanted to get out of it. I wanted to do something that was technically advanced and that did stuff that other machines, especially music machines, haven’t done yet.

You’re an avid pinball fan. What are some of your all-time favorite machines?
You know, it sounds corny, but I still love the Addams Family machine.

That one has always been super popular for some reason.
It’s one of those games that just ticks all the boxes. It just seems to work. I can’t think of one pinball aficionado that doesn’t name that particular machine in their top 10. But let’s see…there’s the Wizard of Oz machine, which is great, and there’s another Jersey Jack machine that came out called Dialed In! that’s a really technologically advanced game. It actually takes pictures of you while you’re playing. The original Data East Jurassic Park machine is another one that I’ll always love. The new Willy Wonka, another Jersey Jack game, is really fucking great too.

What do you love about pinball?
You know, it’s sort of funny, and I’m embarrassed to say this, but I was never into pinball or video games when I was young. Maybe a little bit of Galaxian here and there because there was an arcade across the street from Fairfax High, but that was it. I didn’t get turned on to pinball until, like, the early ‘90s. But what I love about it is it’s a tactile, hands-on kind of a thing. It’s very manual and very physical. And I love the bells and the whistles, the themes — I love anything that’s monster-related or rock-related or movie-related — and the fact that each individual game has its own rules and its own direction. The whole thing just draws me in. And I haven’t grown out of it. So you’re not someone who grew up playing the classic KISS pinball or any of those machines.
Back in the day when they came out? No. But I did love them just from an aesthetic point of view, you know? The [Rolling] Stones machine, the KISS machine, I thought they were great.

They’re works of art, in their own way.
Mm-hmm. Even the old, old ones, there’s just something really cool about them. And that’s what I love about Jersey Jack. They make great playing machines with really original ideas, but they’re based off the golden rules of pinball. They just take it to that next level.

I love how the Not in This Lifetime game is built around the live setlist.
Right. The coolest thing about it to me is that we recreate the whole Not In This Lifetime experience. We have the 21 songs on there that you can choose from, and we pulled the content from our video screens and put that on the back glass screen, which is really big, and then there’s also a small screen down in the playfield. So you have the live footage of us playing whatever song you pick, the video footage…we even have the lighting truss from the shows in there. The main idea was to recreate a concert.

Nowadays it’s about as close as you’re going to get to experiencing a live show.
[Laughs] That wasn’t what I was thinking at the time, but, yeah.

Guns, however, did just announce a new spate of tour dates for November 2021. Can you envision getting back out there and playing for fans again?
Oh, yeah. I’ve been envisioning it happening ever since this whole thing started. We were actually just about to start a tour at the beginning of all this. We did one show, the very first show of the tour, and then COVID locked in. But from March until September we were supposed to be on the road. That’s pretty much this whole time. And it’s been strange to be grounded. You start to realize how much time you spend on the road because of how long you’ve been home, you know? So I’m dying to get back out there.

You’ve spent so much of the past few years on tour with either Guns N’ Roses or with Slash Featuring Myles Kennedy and the Conspirators. Has being at home afforded you the time to just sit and write new music?
That’s all I’ve been doing, really. And thank God for the ability to do that. Because I would have definitely started going stir crazy. So yeah, I’ve worked with Guns, worked with the Conspirators, worked on a bunch of other ancillary shit outside of those two bands and have just kept myself pretty much playing all the time. So it’s been creatively healthy to have all this time. I’m somebody that tends to work really fast. It’s just boom boom boom. But this experience has sort of forced me to slow down and really pay attention to what I’m writing, and I think some really good stuff has come out of it.

So when Guns gets back out onstage in Australia next year, is it possible there might be some brand new music in the setlist?
It would be way too early to say anything like that. [Laughs] That’s a good question, but…sorry!