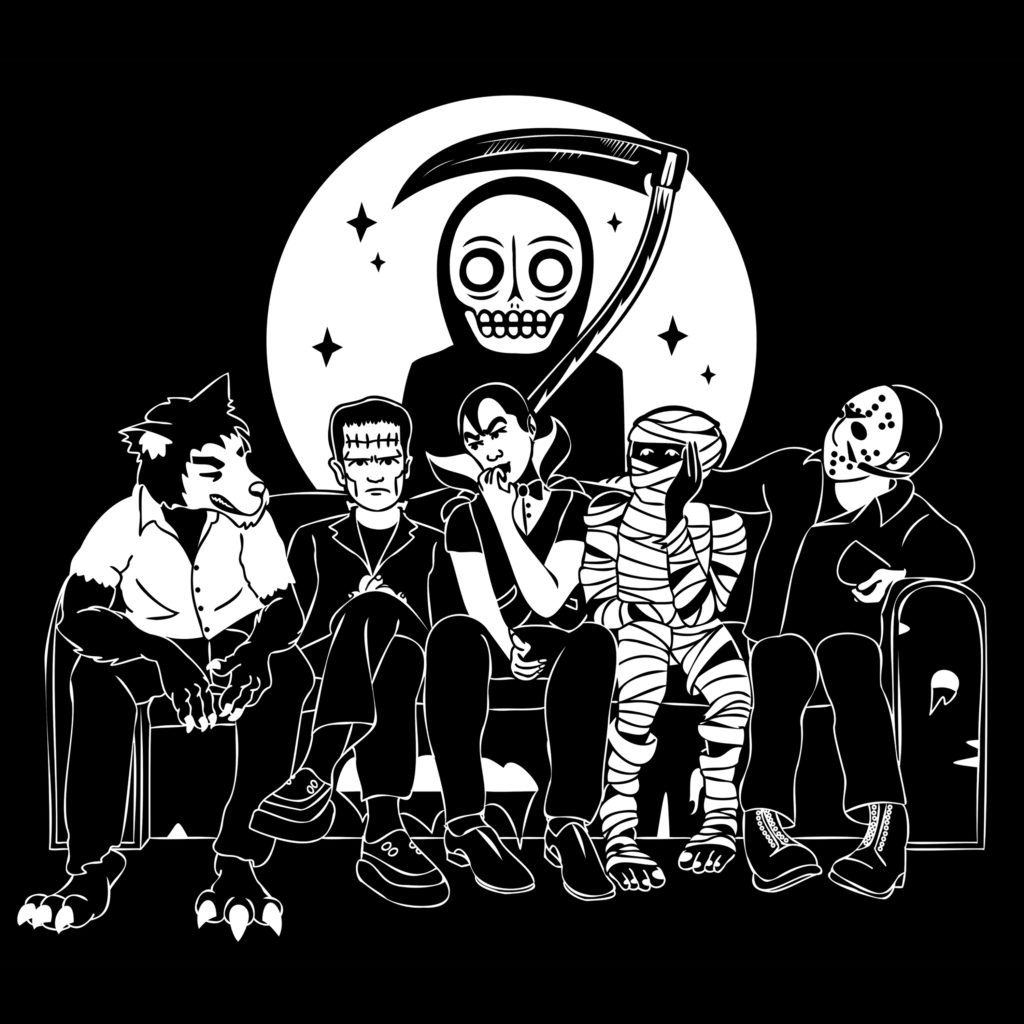 If you were bummed about having to cancel your Halloween plans due to COVID-19 this year, Saves the Day and Senses Fail have a little surprise to lift your spooky spirits.

The appropriately named Through Being Ghoul (with perfect album artwork to match) is a four-song split EP between the two bands, with lead singers and band ringleaders Chris Conley and Buddy Nielsen putting their own unique spin on each of their two tracks. The blend of horror-punk and emo/post-hardcore sensibilities works surprisingly well, with each of the artists channeling their inner Danzig while still keeping with the sound fans expect from their decades-long careers.

Clocking in at just under 7.5 minutes (which is probably about right for most combinations of four Misfits songs) the surprise drop of Through Being Ghoul (out today via Equal Vision Records and Pure Noise Records) serves as a quick little seasonal injection that makes far more sense than the dozens of artists who decide to cover Christmas tunes every year.

SPIN caught up with the two songwriters to chat about cover songs, fatherhood, the Garden State, and much more.

SPIN: Misfits covers are obviously perfect for Halloween, but how did you two decide that this was what you wanted to do for your EP together?
Chris Conley: Well not only are the Misfits like the perfect Halloween band, but we’re also both from New Jersey and they’re like this legendary New Jersey band.
Buddy Nielsen: When you really start to dig in, they’re about as New Jersey as you can get. I’d never really dissected misfit songs before, but when you do, it’s like I don’t know if it could have come from anywhere else.
Conley: It’s funny for me, because growing up, I didn’t realize that they were a New Jersey band until way later — like maybe even my early 20s. I grew up the whole time as this punk kid in New Jersey, and I just thought the Misfits were like this world famous punk band like the Ramones or something.
Nielsen: Yeah, I had no idea they were from there. I grew up in Bergen County, and they’re from this town called Lodi, which is just this really random town. It’s mostly Italian, and they’re known for having a really really good Italian deli there. It’s just so funny that they’re from Lodi.
Conley: What if they met at the deli making spooky subs. That would be so classic if they made spooky sandwiches together. But really Senses Fail and Saves the Day are represented by the same manager, and he had the idea about doing a Halloween split where we both cover Misfits songs. Immediately I was like, heck yes. Sign me up. That sounds like fun.

Knowing how you selected the band, why did you choose the two tracks you each covered out of the dozens of Misfits classics?
Nielsen: I just always had this weird obsession with the song “[We Are] 138” because my group of friends used to get pretty drunk and just scream that song. There was that thing on the internet, the “Danzig Grocery Shopping List,” and I don’t know if anyone’s familiar with that, but it’s perfect. It’s somebody singing like Danzig going through a shopping list, and his delivery is just that Jim Morrison-like crooner punk thing. It’s so over the top and hilarious that I just immediately knew I wanted to do “[We Are] 138” because I kind of just wanted to sing like Danzig and that song just kind of let you do that. And I liked that it doesn’t make any sense. I did a bunch of research on what the song’s about, and apparently it’s about a movie about a robot called 138. But that’s what Jerry Only said, and then Danzig got really mad and said that Jerry Only doesn’t know what the fuck he’s talking about — and that it’s not about that, it’s about murder.
Conley: Oh my god! That’s so perfect.
Nielsen: There were some other songs I wanted to do. But I’m not doing a song, where some of it is just really aggressive. I would read the lyrics and be like “I’m not gonna do this.”
Conley: So many of the songs are like that, and it’s like it’s only OK if you think of it as a song about movies about robots or horror movies. For me, I was talking with our management and we were all just excited about the idea. I had the Misfits’ entire catalog on shuffle in my studio because I was psyched and getting myself into the world of the Misfits. Right as the song “Some Kinda Hate” came on shuffle, one of our managers said “Oh, could you do “Some Kinda Hate”? I love that song!” I was like “Hell yeah, let’s do this one.” It’s just a rad song that feels like a doowop song — like a Motown song done by a punk band — and a lot of the Ramones’ songs feel like that to me as well. I grew up listening to rock and roll and doowop and stuff with my dad in the car going to school because he was a big Motown fan, so there was something appealing to me about that.

Then like an hour later, “Where Eagles Dare” came up, and it just felt like it would be so much fun to sing “I ain’t no goddamn son of a bitch!” So that’s why I picked that one. I like the fact that you get to yell these things that you would never ever write, you know? On some of them, the lyrics are almost like an early Saves the Day lyric — which was very much employing ghoulish overkill. It’s straight out of a horror movie, and it was fun. I just fully got into the Halloween spirit of it all since this was going to be a Halloween release. It’s spooky punk.

Considering that you’ve both been touring for most of your adult lives, what’s it been like to be forced away from that lifestyle by the pandemic?
Nielsen: I just realized that my entire life has been traveling. There’s just something about waking up in a city that isn’t your home and knowing that the show is either sold out, or you’re just gonna have an awesome day and like go and explore. When people ask me why I keep touring all these years later, it’s not only because I love music, but it’s because I love traveling and what it does for my soul to see other places and experience new things. Not having that has been truly the thing that I miss the most. I’ve been lucky that everybody in my life has been healthy — so that’s obviously, number one — but I just feel like I’ve lost a sense of adventure. There’s so much joy for me that comes from the adventure, and even the ridiculous things that happen on tour when things go wrong. Now I have a 3 year old, so I get to spend a lot more time with her no matter what I do.
Conley: I’ve been doing the dad thing a lot, and it’s the best. Like Buddy’s saying, my whole life’s been on the road, so this is actually the longest I’ve been home since graduating high school and hitting the road. That side of it has actually been awesome, because it’s more of a sacrifice to leave and be gone for a few months and not get to be with my family. That’s a silver lining of all this. It’s more time hanging out with my daughter, and it’s been amazing — although I think for her, she’s like “Man, we don’t even get to do Halloween.”

Since you’ve got the Misfits covers dropping today, if you could pick one of each other’s songs to cover, which would it be?
Nielsen: I would do “Sell My Old Clothes, [I’m Off to Heaven].” It might be the darkest Saves the Day song, lyrically.
Conley: When I play it live sometimes I have to give disclaimers now. I’ll be like “Yo, this was an exercise in a poetry class, and I was writing about feelings.” Anyway, the tag at the end of the song is “to Hell with you,” but the line before it is, is “If this sky’s going to eat us, then I’d like to be digested into a million pieces with you” and then it’s like “I’d love to be scattered to Hell with you.” So it’s a love song, but it’s like somebody missing out on the good stuff. There are also some lines about dismemberment and like tearing out my eyes and wearing sunglasses for the rest of my life. That’s why I wear sunglasses all the time. I got rid of my eyeballs so long ago.
Nielsen: I just love that song.
Conley: I have to go with a really special song to me personally. It means a lot that you guys did the song “Stay What You Are.” It’s just really touching, and I don’t I’ve ever told you that. It means the world to me that you guys have that song. But also the spirit of that song feels like it would be fun to cover.
Nielsen: We should do this.
Conley: Do you remember the old comps that Vagrant used to do where it would be like Dropkick Murphys versus Hot Water Music where they covered each other’s songs? We should do a part two of our split series.
Nielsen: I’m not going anywhere. I’m into it.
Conley: Yeah, it’ll be a SPIN exclusive.

The Most Influential Artists: #14 U2