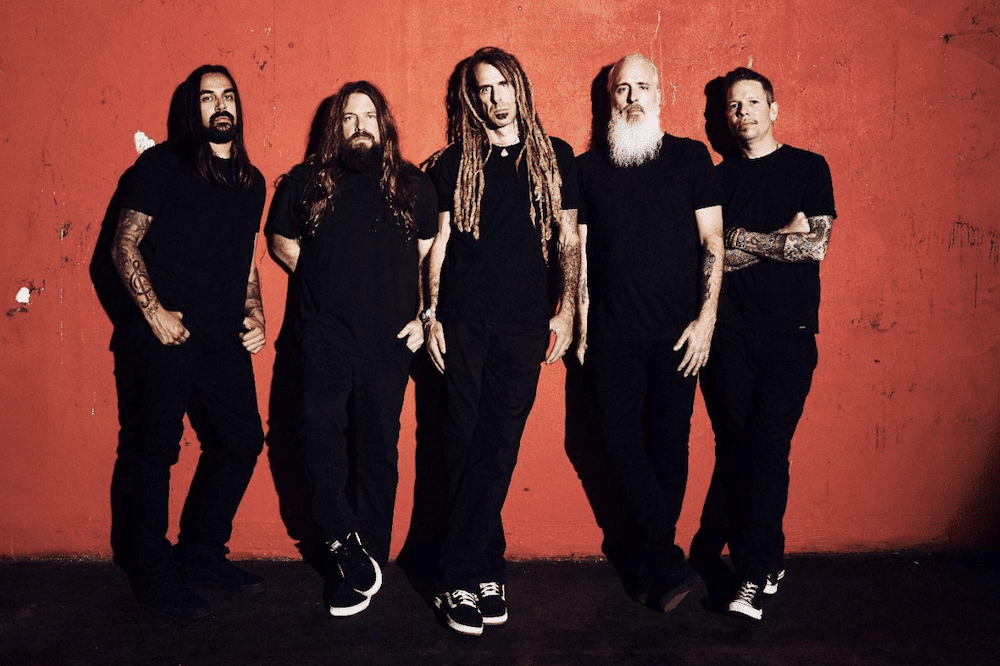 Like a lot of Americans, Lamb of God frontman Randy Blythe is none too impressed with the job our Twitterer-in-Chief’s been doing. Unfortunately, as a prominent musician who actually expresses that discontent, both through his lyricism and in interviews, he’s largely in the minority, begging the question: Why aren’t more rockers critical of the political machine?

“Because they’re fucking pussies,” Blythe blithely told SPIN during a pre-lockdown visit to New York City in late February. “I think it’s almost like we’re at this critical mass of fucked-up-ness, and everything is just going to go to complete shit.”

Of course, Blythe isn’t all doom and gloom on Lamb of God’s forthcoming self-titled 10th LP. He said to SPIN he is hopeful things can change — a sentiment he expresses on Lamb of God, the band’s first record in five years. Slated for release June 19, Lamb of God is — as you’d expect — a ferocious, sinister-sounding collection of 10 infectious and effective metal tracks, all bursting with razor-sharp riffage, dense bass lines, and punishing beats furnished by new drummer Art Cruz. Boasting collaborations with Testament’s Chuck Billy and Hatebreed singer Jamey Jasta, Lamb of God was once again helmed by longtime producer Josh Wilbur, and sees Blythe delivering a thunderous, august performance — particularly on the savage tracks “Reality Bath,” “New Colossal Hate,” and “On the Hook.”

As of this writing, the coronavirus crisis had not yet affected “The Metal Tour of the Year,” which features openers In Flame and Trivium and is still scheduled to kick off June 12 in Virginia. The following questions and answers were edited for length.

[Editor’s note: Prior to the interview, Lamb of God’s publicist barred any questions about the recent departure of founding drummer Chris Adler, or the 11 months Blythe spent inside a Czech Republic prison for his alleged role in the 2010 death of a fan — which he was eventually acquitted of.]

SPIN: So, the Metal Tour of the Year, huh? That’s a fairly bold declaration, no?
Randy Blythe: Well, I didn’t make it.

Of course, of course. It was probably some marketing genius. How did the tour come together?
I was sitting at home, thinking deeply about who I wanted to tour with, and I thought about a bunch of bands and … I’m just joking. I don’t fucking know who came up with it, dude. A booking agent, you know what I mean? I have no fucking clue. They’re like, “Do you guys wanna go on there?” I think it was our management.

I deserved that. I just figured, you know, perhaps since you’ve toured with Megadeth before …
I mean, obviously, if there was any static there and I hated Dave Mustaine or something, I’d be like, “Well, no. Fuck you, it’s not happening.” But no, we’re good. We have a good relationship with every single band on the tour, and we have toured with every single band on the tour. I’m kind of the wrong guy to ask about the mechanics of anything within my band. I’m the guy who, they say, “Hey, we are going on tour August 8,” and I’m like, “When is my flight? Okay,” and then I show up. People ask me, “Dude, are you guys gonna be doing such and such a song at the All-State Arena?” And I’m like, “Where’s that?” I don’t know. “Well, it’s in Kansas City.” “Oh, are we playing Kansas City? I don’t know.” I just show up. All tours are the same to me. All of them. I do the same thing. It doesn’t matter if I’m playing in front of five people or 100,000 people, I show up, and somehow, people have been paying me to keep being on stage for 25 years now. It’s a pretty astounding feat.

I was going to say … it’s been 20 years since [Lamb of God’s 2000 debut] New American Gospel, and you’ve been a band for 25 years. Is it mind-blowing you have two albums that are old enough to vote and one that’s old enough to drink?
[Laughs.] No, no … I am acutely aware that I am an old man at this point. What is mind-blowing to me is that, somehow, the band has managed to not implode despite going on 26 years now, I guess. And it is astounding to me that I get paid to run around and scream, like an uber toddler, and jump like I’m still 17 when I’m not; it hurts. But I mean, it is weird for me sometimes. I got a message from my friend Jamey from Hatebreed, and I was listening to his podcast, and he had Ice-T on as a guest. So, Lamb of God came up, and Ice-T goes, “Shout out to Randy,” and I’m like, “What the fuck?” You know. Like, that’s crazy, dude. This guy, I listened to his rap music in high school, knows me, and I think about all the bands that I listened to in high school. Like, literally 90% of the bands I listened to, all the punk rock stuff, I’m friends with all those guys. And it’s mind-blowing to me that we can make a living off this because my only dream I ever dared dream was maybe one day I’d get to play CBGB. And that happened.

This new record that’s coming out, it’s very political. Some obvious references to the Trump administration. Why do you think bands are so hesitant to criticize the White House in their lyrics?
Because they’re fucking pussies, how about that? [Laughs.] Punk rock, hardcore, metal, it’s always been rooted in social commentary, and not many people are doing that. To me, I did not write a single song about Trump because my disdain for him is no secret. It’s kind of foolish to write a record about that guy because there’s no one topical problem you can pin down, since everything is shifting so quickly these days. Right now, it’s just this huge shitstorm, and reality is subjective. People seem to have abandoned common sense. The media has a great deal to do with that, and the internet has a great deal to do with that.

I am pretty disdainful of the system as a whole right now, and that’s one thing that helped get Trump elected. People were feeling — rightfully so — that the sort of inside, old school guard of Washington, D.C., were not presenting us options. People were tired of dealing with the political establishment and I don’t blame them. I think a lot of people were like, “Well, Donald Trump … he’s rich, he’s from outside the system — let’s vote for him.” While I understand that urge, Ronald McDonald is also rich and from outside the political establishment. That doesn’t mean he should be president of the United fucking States. I also think—and I was not a fan of Hillary either—but I’ve had people say, “Oh, you don’t like Trump, you must love Hillary.” “No, fuck you.” She was a shark as well. If you look back at the history of the Clintons, going back to Arkansas, it’s fucking nuts. They were savages.

Oh yeah.
Right now, in American politics, us being restricted to this two-part system, and those are the only real, viable options for a vote to count, I think it’s indicative of the fact that the system is failing. It’s failing, and I still believe the ideals that America was founded on are great, and I think there is hope. But the operating system needs an overhaul. Just like a computer … you wouldn’t use a 20-year-old computer today. Why should our system remain basically the same when everything is changing so rapidly? Technology is a big part of the problem. If you think about, as human beings, we haven’t evolved much at all since cavemen. We have the same body, the same brains, everything. Not much has really evolved, but the things we are expected to deal with have changed so incredibly rapidly since the advent of the computer. It’s a constant intake of information. How are you supposed to process it all? How are you supposed to put anything into any sort of compartment that makes any sort of sense within your daily life?

The system’s broken.
Yeah, and the record isn’t a 100-percent nihilistic record. There are several moments of hope on the record, and that was very purposeful. I can’t just sit here and say, “Everything is fucked.” If I truly believed that, I am at a level in my life, economically, to be honest, where I have the means to disappear.

You wouldn’t have to work anymore?
Not if I did it right. I’m not a millionaire, and I’m not rich, but I’m really fucking smart, and I know where it’s cheap to live. I could disappear right now if I wanted to. Adios! So, if I really believe that everything is fucked, I just need to go be a hermit, and go live, in my place, for $6 a day — which I do have, by the way — I would go ahead and do it. But I don’t think everything is doomed. I think it’s almost like we’re at this critical mass of fucked-up-ness, and everything is just going to go to complete shit, or it’s going to go to complete shit for a little bit, and people are going to have to learn to work together. I think the way forward in that situation is going to start off on an individual basis, because no matter what anyone’s beliefs, in general, if I can meet them, on an individual basis, and talk to them one-on-one, we can all find common ground.

That’s the hope, right?
I know people who don’t talk to their parents anymore, and I also have some very, very good friends who voted for Trump who are not Nazis and not racists, and they do charitable things and they do humanitarian work—hard fucking work. So, I think it’s a mistake on both sides when people employ this sort of groupthink, this crowd psychology, this lumping of people into one group, and then they feel as if they can condemn them. And that is happening on a large scale right now, and it’s hard communicating with people you disagree with. It’s easier to just scream at each other, particularly from behind a computer screen. It’s a lot heartier to have the guts to sit down and talk face-to-face. I think that’s going to have to happen, or, we’re all gonna die. [Laughs.]

Obviously, this upcoming record is your first with new drummer Art Cruz (formerly of Winds of Plague, Klogr, and Prong). I know you’ve said before the new blood helped energize the band, but was it a smooth transition?
Sure. Art has been playing with us for a while. He was touring with us before he was in the band, and we’ve known him for years. He rode on the tour bus long before he was ever in the band. He’s a really good friend of ours, and it was really smooth. It’s a joy to work with him. He’s not, like, 23 or whatever, but we’re all approaching 50, so he’s younger than us, so it’s nice to have a younger guy, and kind of bring that energy to us, and it’s nice to see that. I enjoy being in Lamb of God, as does [bassist] John Campbell and [guitarists] Mark Morton and Willie Adler, but all of us have been doing this for 20-plus years, so it’s not “new and fresh.”

I get that.
He also brings a fan’s perspective to the band. We listen to what he has to say, but we’ve never written music for our fans—we write music for ourselves. And I think the fans know that and that’s why they stick with us. If we start writing too close to other people’s wishes, then we might as well get a songwriter and record Top 40 bullshit.