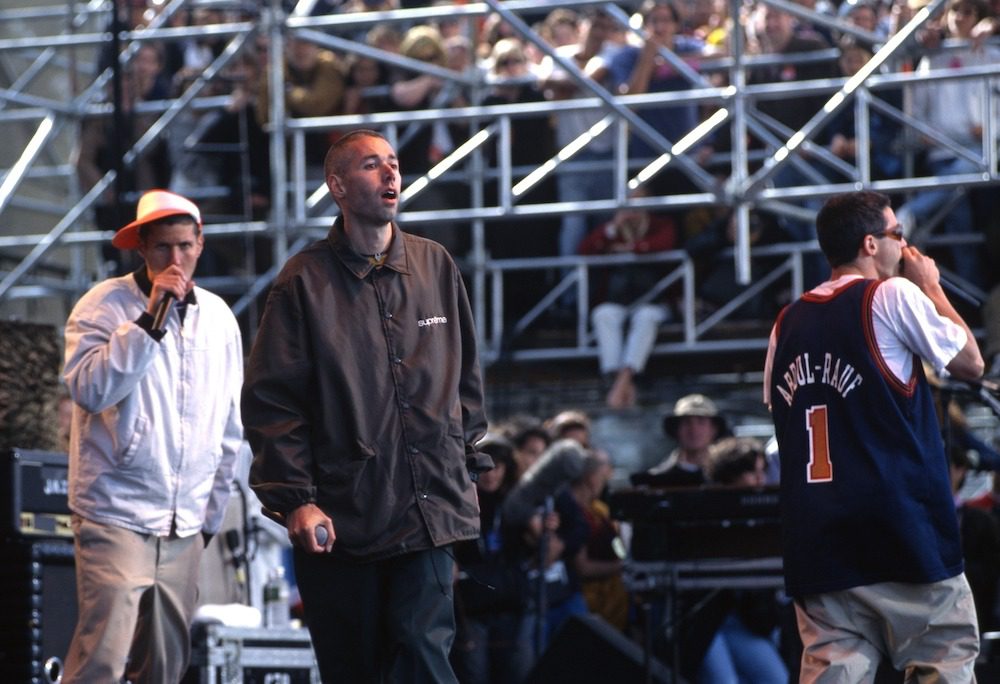 Rock ‘n roll and politics have a long, intertwined history — and it’s hard to find a better example than the Tibetan Freedom Concert.

Beginning in 1996 at San Francisco’s Golden Gate Park, the festival brought together many of the biggest artists of that time for one reason: liberating Tibet from decades of crippling control at the hands of China’s Communist regime. The festival was spearheaded by the Beastie Boys, and in particular, the late Adam “MCA” Yauch, who cared deeply about this mission.

We’ll touch more on the genesis of the concert in a moment. But first, let’s get to the reason you probably clicked on this article to begin with — the music.

These bills were loaded. The Tibetan Freedom Concert continued to run into the early ‘00s, but it’s biggest years were between 1996 to 1998. Here’s just a taste of the artists who performed during the festival’s late ‘90s prime: Rage Against the Machine, Red Hot Chili Peppers, Smashing Pumpkins, Sonic Youth, Beck, Bjork, Alanis Morissette, Patti Smith, No Doubt, KRS-One, De La Soul, A Tribe Called Quest, Pearl Jam U2, Foo Fighters, Wyclef Jean, Biz Markie, Radiohead, R.E.M., and, of course, the Beastie Boys. What more could you want?

And since they were the ringleaders, we’ve gotta start off with the Beasties. Here they are ripping through an especially raucous performance of “Sabotage” — with Adam “Ad-Rock” Horovitz rocking a hella ‘90s Mahmoud Abdul-Rauf jersey — at the inaugural show in San Francisco:

The boys from New York City were also joined onstage by Q-Tip for “Get It Together” off Ill Communication:

And you’ll probably want to check out this version of “Stand Together,” if only for the sideways visor that makes Mike D look like a hip-hop version of Lane Kiffin.

For the Beasties, this was more than just a show, though. About a half-hour into the set, you’ll catch MCA kindly asking the crowd to attend the following day’s demonstration, aiming to bring Tibet’s plight to the attention of then-President Clinton. This wasn’t just for show.

Yauch didn’t just talk about it, he was about it. Yauch took up the Free Tibet cause after meeting Tibetan refugees while visiting Nepal in the early ‘90s. Soon after, he co-founded the Milarepa Fund, a non-profit organization dedicated to raising money to help liberate Tibet. And from the jump, setting up a Live Aid-style benefit concert was on his mind. After a few failed attempts to get it off the ground, the Tibetan Freedom Concert finally came together in June ‘96, in some cases, personally inviting the acts to perform.

“This can become a springboard for change all over the world and exemplify nonviolent struggle and using compassion to stop hatred,” Yauch told Rolling Stone about the festival in ‘96. The movement, he added, “is not pro-Tibetan, and it’s not anti-Chinese — it’s pro-justice.”

Unsurprisingly, Rage Against the Machine — a band that knows a thing or three about mixing rock and politics — were one of the headliners at the first show. Everything you’d expect from a RATM show — passion, energy, bone-crunching riffs and the occasional political rant from Zack de la Rocha — is all right here. This is mid-’90s apex RATM:

And if we’re judging strictly by the lineups, the ‘96 show is the best. If you had Doc Brown’s time-traveling DeLorean, this would automatically be a top-3 rock festival you’d want to go back to (alongside Woodstock ‘69 and FYF 2011. Just trust me on that second one.) The show was packed with iconic ‘90s acts, including Smashing Pumpkins; here they are blitzing through “Bullet With Butterfly Wings,” less than a year after releasing Mellon Collie and the Infinite Sadness:

You also had a tight 25-minute set from Pavement:

The 1997 show, held over a June weekend at Downing Stadium on Randall’s Island in New York City, tends to get lost in the shuffle a bit. It’s often treated as the middle brother, stuck between the first show and the ‘98 event. It shouldn’t be. Eddie Vedder and Mike McCready popped up for a surprise three-song set for early attendees on day two and it featured Alanis Morissette holding court, without getting up from her seat once…

But you also had a vintage performance from U2. And yea, the Pop era wasn’t the highlight of U2’s run. That’s not debatable. Still, it’s probably worth extending them some slack. This was at the same time Metallica cut their hair and Prince was still being referred to by an unnamed symbol. Lots of curious choices were being made. Either way, “Mysterious Ways” still holds up:

Noel Gallagher also made a surprise cameo at the ‘97 show; here he is performing “Wonderwall,” with Liam nowhere to be found:

And of course, a thunderbolt of a late-afternoon set by Foo Fighters:

Which brings us to the 1998 show. This was the biggest show festival of them all, with $1.2 million raised and more than 60,000 people cramming into RFK Stadium each day — but it was also a bit of a shitshow.

Things got off to a scary start, with lightning striking the stadium early, injuring 11 people, and cutting the first day short. The first bolt hit at 3:45 p.m. during Herbie Hancock’s set and struck George Washington student Lysa Selfon, who was dubbed “lightning girl” because of it. (Selfon ended up using her pain to help others by raising money for a local Burn Center.) The lightning ended up throwing a curveball to the second day’s schedule — and threatened to squash a surprise appearance from the Red Hot Chili Peppers, who had recently reunited with John Frusciante. Day two headliner Pearl Jam ended their set early so that the Chili Peppers would have a 15-minute window from their own set.

“Eddie Vedder got wind of our dilemma,” Anthony Kiedis wrote in his 2004 autobiography, Scar Tissue. Vedder “threatened to pull out unless we were given part of their allowed stage time. It was an amazing show of support from them, and we never forgot it.” RHCP could only fit 3 songs into their window, but it was a damn good trio: “Give It Away,” “Under the Bridge” and “The Power of Equality.” The reunion ended up foreshadowing the band’s comeback a year later:

Pearl Jam deserves some shine, if only for the good deed, so here’s a good 10-minute medley of their ‘98 performance:

Plenty of other cool shit happened, too, like Michael Stipe joining Radiohead onstage for “Lucky”:

And it’s only right to close it out with a full 50-minute set from the Beasties, including the stadium-debut of “Intergalactic” and other hits like “Sure Shot.” Please forgive the anti-HD recording. It was 1998, after all:

This is how the Tibetan Freedom Concert should be remembered. MCA died in 2012. He didn’t live long enough to see his ultimate goal — a Tibet free from China’s shackles — become a reality. It’s still not a reality. But his efforts weren’t in vain. Yauch can rest peacefully knowing his festival helped raise millions of dollars for a righteous cause — and gave thousands of fans some of the best concert memories of their lives.