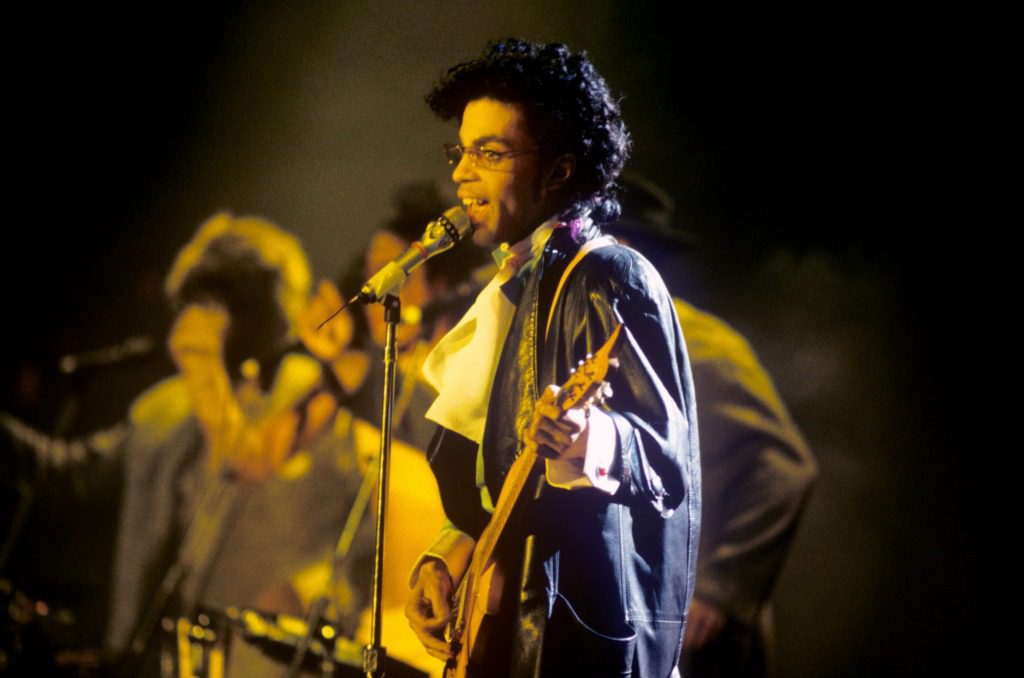 By the mid-80s, Prince was a global superstar thanks to the worldwide success of 1984’s Purple Rain.

So when he started work on his follow-up — eventually released on March 31, 1987 as the double-LP Sign O’ the Times — it came amidst a creative tsunami that saw two more classic albums with his longtime band the Revolution (1985’s Around The World in A Day and the following year’s Parade), the 1986 film Under The Cherry Moon and three ultimately shelved titles (Dream Factory, Camille and Crystal Ball).

For those who worked closest to him during this period, including Revolution keyboard wizard Matt Fink (aka Dr. Fink), longtime engineer Susan Rogers and bassist Levi Seacer, Jr., it was astounding to see such a voluminous output from Prince during this time.

“I had a lot of personal time with him,” Seacer explains. “And when I was with him by himself, it was really like sitting with one of your regular buddies. And it was so interesting being around somebody whose fountain was just overflowing with creativity, and then you go back into the real world and everybody’s fountains are cut off. So what he was good at was trying to encourage you to open that fountain and say, ‘Hey, you got a lot in there; why don’t you just let it out so you can put more in?’ I didn’t realize I could actually do all of that. And when you do that, you can really find out who you are, and then that faucet don’t stop flowing.”

Rogers says Prince was “extraordinarily prolific” during this period.

“I’ve got some books on my shelf, and I’ve done a little bit of research into the neurobiology of creativity. And I’ve come to recognize that Prince truly was a rare bird with an extraordinarily high level of creative thought,” she says. “So he could be on output to a much higher degree and quite naturally more than most mere mortals. And if you give that guy so much free time, you’re going to get a volcano of recorded material.”

The highly anticipated Sign O’ the Times: Super Deluxe Edition is the densest box set yet from the Prince Estate Archives, given the massive amount of material Prince squirreled away during that time. So much, in fact, that it became a little untenable to monitor, leaving his treasured vault susceptible to thievery.

“There was all this material being accumulated, let’s just put it that way,” Fink explains. “There are a lot of songs on this new box set that haven’t seen the light of day, though I know a few were smuggled out of the vault and ended up on bootleg albums in Europe. It’s kind of weird. I remember people actually sending me things and I wasn’t even looking for it. Even one came from a French journalist who had something like a double album, and it had ‘All My Dreams’ on there and some other stuff. I was really quite shocked, and I know that Prince was very upset when he found out later on that people had lifted things from the vault. Possibly one of his engineers, who knows. Anybody on his staff.

“There was a time when he was very paranoid about that and worried that people were grabbing things and bootlegging,” he continues. “What was even more odd was in 2004, when someone told me they read on the internet about someone accusing me of bootlegging Prince songs, and that was out there for a minute. I was worried if Prince had seen it and maybe thought I was somebody who did something. And sure enough, he never came to me about it. But somehow I put the kibosh on it. I managed to get in touch with that guy and told him to cut it out. Then Prince asked me personally to let him know if I ran into any bootleggers.”

For Fink, however, seeing all of this material in one definitive collection gives him a new perspective on this period — including songs he never knew existed while listening to the advance stream in the months before release.

“It’s really great to see all this stuff,” he enthuses. “And what’s interesting is I just looked at part five of the box set and I see the song ‘Eggplant’ with the original Prince vocal. I’ve never heard of that. Maybe he played it for me. Sometimes he’d come to rehearsal and he’d bring songs he was working on just for us to hear — or he’d pop in the studio and he’d play me what he was working on because I couldn’t be there every day while he was creating. Unless I got that phone call asking me, ‘Come on in, I need you to play something in the studio’ — but at that time, he didn’t need me that much. He was collaborating with Wendy and Lisa more than anybody else in the Revolution, and [saxophonist] Eric Leeds. Eric would create these amazing corner arrangements with Matt Blisten and stuff.”

According to Rogers, the presence of Leeds and trumpeter Matt Blisten (aka Atlanta Bliss) became a key turning point in the creative direction Prince was taking as Dream Factory started morphing into Sign O’ the Times.

“Eric Leeds and Atlanta Bliss almost single-handedly helped to fill the hole left by the departure of Wendy and Lisa and Bobby Z,” she says. “A lot of Prince’s harmonic sensibilities came from what Wendy and Lisa knew about music. So with Eric there, he had that same training, and Eric could also bring the weight of harmony in soul and jazz and other styles of music. The complement of Eric and Matt Blisten, who is an underrated player and is really, really strong —  when you watch the concert film, they are amazing. Note how in horns, unlike strings, the attack time is super fast in the order of just tens of milliseconds. So for horns to be tight, you [need] a greater sort of athleticism in a certain sense; or as great as a major league pitcher — you have to make your decisions and your emotions so tight and so fast. And that is super hard to do, but those guys did it.”

Leeds and Blisten weren’t the only jazz artists who inspired the aura of the Sign era. One of the greatest mysteries of this Prince period was the depth of his collaborative work with Miles Davis, who wasn’t shy about the Purple One’s influence during the trumpet master’s vastly underrated Warner Bros. era. This deluxe edition includes both “Can I Play With U” (the long, lost studio cut Prince and Miles recorded together for Davis’ 1986 Tutu LP) and the jazz icon’s appearance in the final moments of Prince’s mythical 1987 New Year’s Eve concert at the newly constructed Paisley Park compound. And for Rogers, such recollections immediately bring up a special memory she shared with Prince and Miles shortly before her departure from the Paisley Park fold after Sign hit record shops.

“I can only speak to the time I saw them together, which was before they made the recording that’s on the Sign O’ the Times box set, which I did not do by the way — I had just left at that point,” she explains. “But a few months prior to that, Prince called and he said, ‘Miles is coming for dinner,’ and he gave me a list of four or five titles to pull out of the vault. He said, ‘Set them up and ready in the home studio downstairs.’ So I grabbed the tapes and set up in the studio, and upstairs were Prince and Miles Davis and Prince’s dad, the jazz pianist John Nelson.”

“So the three men were having dinner and talking, and they came downstairs, and it was one of the most memorable times I’ve ever had in the studio,” she continues. “The affection was so strong between all of them, and the admiration. Miles had us laughing so hard. He was so funny. He told these funny, funny stories. And Prince was just cracking up. Prince clearly adored him, and Miles seemed to seem to interact with Prince kind of like a father figure. He’s about the same age as Prince’s dad. And it was just so beautiful to see them together.”

Davis, it turns out, actually tried bootlegging their session himself — thus becoming the only person to earn a pass from Prince over his famous concern about the vault’s contents.

“We didn’t do any recording that day,” Rogers says. “All we did was listen, just put up tapes, things that were unfinished. ‘Can I Play With U’ was one and then ‘Chocolate,’ which I remember was a song for the Time that hadn’t been released. It’s kind of a few different things. This was so funny: While I was pushing up the faders and getting a rough mix going and playing something for Miles, he takes out of his pocket one of those tiny, tiny, little microcassette recorders, like you buy at Radio Shack. He’s got the little cassette in there, and he presses ‘record’ and holds [it] up to the speakers to record what was coming out. Prince and I just both cracked up, and Prince said, ‘No, don’t worry about it. We’ll give you a cassette.’ And Miles says, ‘No, no, I like it this way.’”

Yet if there was one moment from Sign O’ the Times that truly illustrated Prince’s creative evolution, it’s the recording of Side D centerpiece “The Cross.” For his cohorts, the rock ballad felt like a hard-fought sigh of relief — finally capping off an album that remains the Artist’s singular masterpiece.

“I remember that it was recorded on a Sunday,” explains Rogers. “There were certain songs that I called his ‘Sunday songs.’ And those were usually the songs that lyrically touched on themes of redemption or God. ‘The Cross’ was one of those songs. There were others like that, but this was probably the most profound.”

“To me, it was always spiritual because Prince doesn’t do anything that he’s not plugged into,” adds Seacer. “You can tell on records when there’s no spirituality to them, and it sounds all mechanical. Prince didn’t do anything like that. Even the funny stuff, he was very connected to it all.”

“I remember when it was all finished, with that marvelous guitar work and everything else that he does, like the stacking of the backing vocals,” Rogers concludes. “He was so happy, and it stood out because he had been pretty somber compared to the other records on which we’d worked together. He was happy when we did ‘The Cross,’ however. And I got the sense that it alleviated some pressure or it provided some relief to them to do that.”