Marc Maron and Johnny Flynn, Stars of David Bowie Movie, on the Music That Made Them 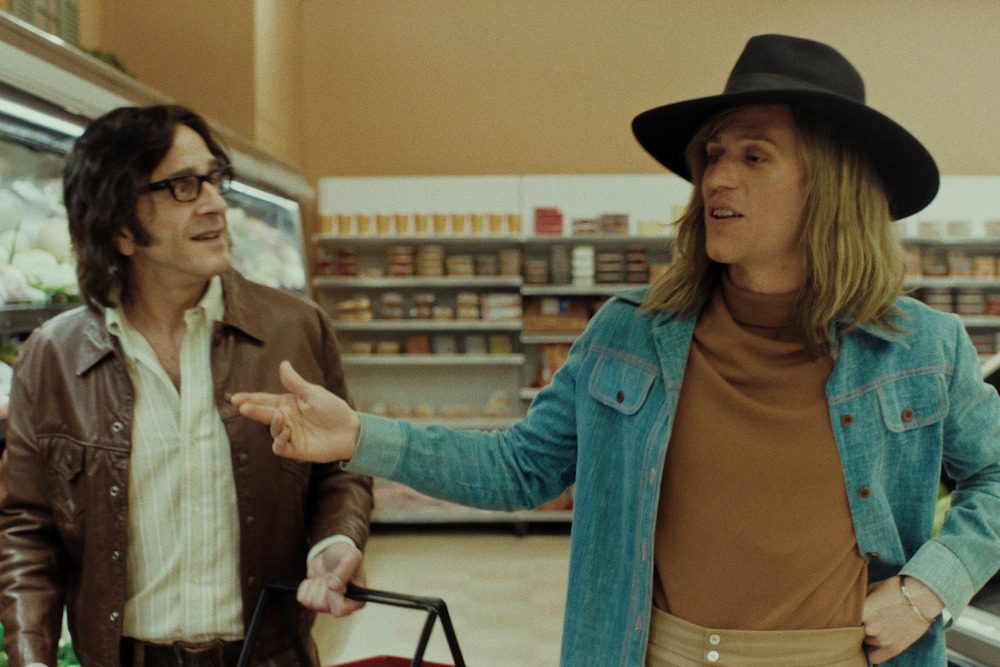 Let’s get this out of the way first: None of David Bowie’s songs appear in Stardust. This might seem like a cinematic Achilles’ heel, particularly given the movie’s time frame: just before the birth of Bowie’s most famous alter ego, Ziggy Stardust. However, not resorting to the jukebox musical techniques, or forcing actors to sing lesser-than covers, might be the film’s greatest strength.

It’s set during an ill-fated tour behind The Man Who Sold the World, where, thanks to a work visa, Bowie (played by a swaggering Johnny Flynn) is allowed to do everything but perform. Instead, the iconic singer, still more of a star on paper than in reality, is reduced to listening: Hunching over a radio in a Midwest hotel room, becoming a deer in headlights at a Velvet Underground show, clutching a demo passed to him by his American publicist Ron Oberman (Marc Maron) — all tiny moments turned into Easter eggs for the artist he’d become. While many plot points may be works of fiction (Bowie was, after all, staunchly anti-biopic), Stardust is realistic in one way — it’s the music that makes us.

Like their characters, both Flynn and Maron have roots planted firmly in the music world. Part of the English folk movement that nurtured both Laura Marling and Mumford & Sons, Flynn has been releasing solo since 2008, including a memorable set recorded live at London’s Roundhouse in 2018. In 2009, Maron launched WTF, a podcast first aimed at interviewing friends in the comedy world but has expanded to include musical guests, including Donald Glover, Paul McCartney and Laura Jane Grace. It isn’t all about Maron’s personal record collection — even if he’s been known to regularly share recommendations on Instagram. As proven by an episode featuring Joanna Newsom, which plays out like a primer of the harpist’s delicate work, the comedian has both open ears and a taste for discovery.

Ahead of Stardust, SPIN spoke with Maron and Flynn for more on the music that’s soundtracked their lives. SPIN: What was your relationship with Bowie’s catalog like before exploring his legacy with Stardust?
Johnny Flynn: I was obviously a big fan but not, like, crazy. I love him and have gotten especially gotten into Blackstar. We were making a record when that was put out, and when he died, I remember being in the studio with all the engineers looking at videos. As a teenager, I was really into Ziggy and the period just before, where we sat the story leading into the film.

Marc Maron: I’m kind of an old man, so he was always pretty important to me. I remember when I was in, probably, seventh grade, when “Fame” was an actual AM radio hit and Young Americans was sort of happening. I didn’t know some of the earlier records, but I knew some of the songs. And then when Scary Monsters came out, it was like, “Holy shit! This is the greatest record ever.”

Is there an artist that you’ve adopted as your own on that intense fan level?
JF: I felt like I met Dylan and Bowie at the same kind of time, and I was like, “Oh, you can go that way or you could go that way.” They represented different things, although I since realized there’s more that they have in common. The thing that I saw, or thought I saw, in Dylan was this kind of stripping away of all artifice — and just this simplicity, which in itself actually was kind of a costume he was wearing. But when you first hear that young voice singing, it sounds like an old soul has landed on the planet — like this perfectly formed Ball of Wisdom.

MM: At the time that I learned about that stuff, I was young, and it was a different time in the world. So to me, it was like secret information. I was sort of open-minded, and I appreciated the art world because I was working across in the university and, you know, I was being turned on to stuff. I was getting into vinyl and stuff, getting into Kevin Ayers and Soft Machine and early Roxy Music. [I was] in high school listening to ambient music with dudes who are listening to Bob Seger going like, “What the fuck is wrong with you man?”

What was the first album you bought yourself?
JF: I think my very first LP was a cassette album of Guns N’ Roses’ Use Your Illusion II when I was nine. I was obsessed with Guns N’ Roses! There was Nirvana and Guns N’ Roses, and I was all Guns N’ Roses. The same as Dylan and Bowie — they’re different aesthetics, different philosophies. If I’d been 13, I would have gone Nirvana, but at nine you’re like, “Give me sexy Axl Rose in a kilt and long hair!” I had a crush on them all. And I didn’t know anything about them as people. I have a nine-year-old son now, and I think I’d find it hilarious if he turned around and was into Guns N’ Roses. What’s your favorite way to share music?
MM: I’ve been doing this thing on Instagram Live in the morning where I’ll have the people who are watching pick a letter and a number, and I’ll go to my collection like a jukebox. And I’ll just pull out whatever. Yesterday was the Glories, which was a Michigan kind of punk rock band that Jack White put out a record for. It’s been the Raspberries’ Greatest Hits and a lot of rare records. I get led by a couple of guys who I trust about music: Dan Cook at Gimme Gimme Records, Lance over at Permanent here in L.A. Lately what I like to do is listen to a record all the way through.

JF: I make mixtapes for friends, and I send real hard copies. It’s hard to find people with CD players these days, but I swap CDs with people and make collages for the covers. I never want that culture to die. I make myself mixtapes, especially for moments in my life. When I need to go into this sadness, I’ll make a playlist that’s called like, “Emotional Emo,” of songs that will allow me to feel sad.

OK, now I have to know what was on that playlist.
Flynn: I’m gonna be a bit embarrassed. It’s very personal. Alright. It’s stuff for my wife. Some, some guilty pleasures. [Holds phone up to the camera to display a playlist featuring Dylan, Beirut, Anohni, Dobie Gray and the Rolling Stones.]

How do you deal with interviewing a notable musician on WTF?
MM: How do you talk to Keith Richards, and what are you going to get out of that guy? [laughs] It’s fucking Keith, and I’m all jacked on coffee, and he makes me smoke a cigarette with him, which I hadn’t done in like 10 years. But you’re trying to have a regular conversation with somebody who has had this profound impact. It’s hard to humanize them really. It’s hard to see them as people, even someone like Keith, who is like this weird, almost-skeletal doll of himself. It’s better if I just have a kind of begrudging respect, like with Bruce Springsteen — if I’m not a fan but I know their stature. I’ll get a better conversation if I can see them as people, which usually happens fairly quickly, and which happened with Bruce and with Neil Young fairly quickly. I’m not afraid, and I’m not overwhelmed. So I can be a bit of a pushy dick and hang in there to get them to be real with me. You’re also both live performers. How has that played out for you in music and comedy?
JF: I had a weird hip-hop band at school. We played one gig. And then when I was when I was 19, I came to London to be a drama student: me and my friend, a singer named Emmy the Great, who I’d been at school with. I played in her band, and then she played in the earliest version of my band, and we ran a club night together. She put on the poster that Sheriff Johnny Flynn was my stage name and she was Emmy the Great. At least hers stuck!

MM: I can’t imagine what [it’s like] to be an opening band. That’s got to be hard. The only solace is that you’re up there with the guys you know and play with all the time. If you’re making music, you can get lost in that. [It’s hard for] comedians because if you’re playing for nine people, you’re all by yourself and there’s no way it’s going to be great. And you’ve got to figure out how to extract something good out of it. Sometimes it’s amazing. You can really have an amazing time with nine people and as an educational thing, and it can be a very memorable experience. But it’s not easy.