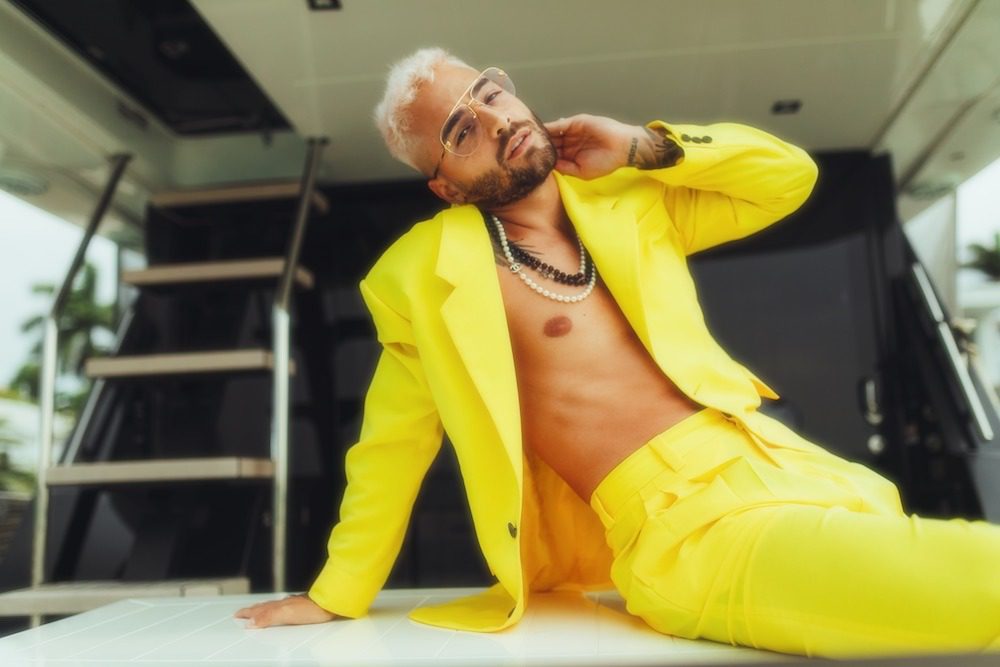 While accepting his first MTV Video Music Award in August, Colombian superstar Maluma switched to Spanish in the middle of his speech. “I’m going to say this in Spanish, though, because I feel very proud to be Latin,” he said. He proceeded to thank the fans, his family and his compatriot J Balvin for their collaboration “Qué Pena,” which won Best Latin music video. “It’s incredible that from Medellín, Colombia, where me and J Balvin are from, is where we made this song,” he added.

Maluma is at the forefront of Latin pop stars crossing over without having to perform a lick of English. His music videos, both street and stylish, are among the most-viewed on YouTube: Six have over a billion views each. Maluma’s latest single, “Hawái,” which he performed at the VMAs in a highlighter green Balenciaga suit, has spent the past two weeks at no. 2 on Spotify’s Top 200 global chart behind Cardi B and Megan Thee Stallion’s “WAP.”

Maluma has become a recent staple at the VMAs — and as he reminds SPIN, his debut performance was a crucial moment. “The first time I had the opportunity to perform at the VMAs was when I met Madonna [in 2018],” he says. “She wanted to meet me. I went to her dressing room, and she was there with Lenny Kravitz. It was a very surreal moment.” Playing his hit “Felices Los 4,” he was the first artist since Shakira in 2005 to perform a song fully in Spanish at the show. Liking what she saw, Madonna invited him to record the steamy “Medellín” for her 2019 album, Madame X. (They also appear together in the wild music video, with Madonna kissing her collaborator and licking his toe.)

A decade before gallivanting with the pop icon and becoming a music streaming giant, Juan Luis Londoño Arias was a promising soccer player at the crossroads of continuing with the sport or embarking on a music career. For a 16th birthday present, his aunt paid for him to record a song. “After I went to the studio, I knew that’s what I wanted to do for the rest of my life,” he says. And Maluma was born.

“My favorite genre is salsa,” he says. “Salsa music comes from Puerto Rico, Panama, the Dominican Republic — all these different places where reggaetón was growing at that time, so that’s how I got involved in the genre.” J Balvin was also finding his footing in reggaetón, the sound popularized in the early 2000s by Puerto Rican rapper Daddy Yankee. “I remember I used to go to the quinceañera parties, like Sweet 16s, in Colombia,” Maluma recalls. “J Balvin used to perform every weekend, so I used to go with my parents and see him.”

Five years into his career, Maluma zeroed in on what set him apart from the reggaetón artists with his aptly titled breakthrough album, Pretty Boy, Dirty Boy. “My fans used to call me ‘pretty boy,’ but [back] then I wanted to do street music,” he says. “I was trying to find the balance of being the teen idol and doing underground music, so that’s how that concept started.” In 2016, that unique combination captured the attention of Shakira, the artist who paved the way for both Maluma and J Balvin.

“I got this text message, and she was like, ‘Hey Juan Luis, this is Shakira. I really want to work with you,’” he says. “I thought someone was joking with me. And then I was like ‘Oh, shit, this is for real.’” Before Luis Fonsi’s “Despacito” topped Billboard’s all-genre Hot 100 for 16 weeks, they reached No. 51 on that same chart in 2016 with the sultry “Chantaje” from Shakira’s El Dorado album. “That was my first global hit,” he says. “Working with Shakira was a nice experience, and I’m going to be grateful to her for the rest of my life.”

In 2017, Maluma changed into designer duds for “Felices Los 4.” On the reggaetón-pop bop about switching partners like a square dance, he harnessed the power of his flirty flow and embraced his signature “Maluma, baby” tagline. “I didn’t like the song to be honest,” he says. “I was still [in the process of] leaving that Pretty Boy and Dirty Boy side [behind], so for me it was very pop. I knew the song was going to be big. Once we sent it to radio, everything in my life changed. That’s my anthem.” The world connected with Maluma in this style, and “Felices” peaked at No. 48 on the Hot 100 chart. He acknowledges that his charm especially attracted the attention of the gay community: “They’re the most loyal fans ever. Of course I support the LGBTQ community. I feel very excited every time I see them support my career.”

As Maluma was becoming an in-demand artist, he reveals there was a push for him to record in English. “I went to Los Angeles and did this studio session with these big producers like Timbaland, Scott Storch and Ariana Grande’s producers, and they wanted me to sing in English,” he says. “I did it because of them and the record label, but I didn’t feel it. I liked the songs, but they didn’t have that Maluma essence, so I decided to stop that project and start all over with another Spanish album.” The only evidence of those 2018 sessions is “Hands On Me,” his English-language collaboration with English DJ BURNS and hip-hop duo Rae Sremmurd. “I’m a huge fan of the American market and artists, but I don’t feel right now that I have to sing in English to be successful and breakthrough barriers around the world.”

Before the COVID-19 pandemic hit, Maluma was on a world tour that saw him visit arenas across the U.S. (like New York’s Madison Square Garden and the Forum in Inglewood, Calif.) to venues in Europe and the Middle East. “I didn’t know that I was going to so many countries and continents,” he says. “That was something I always dreamed about. One time I was onstage, I was like, ‘Shit, man, I deserve this. I’ve been working so hard.”’

Maluma’s new LP Papi Juancho was developed and recorded while in quarantine. “I was trying to look for purpose during this quarantine, so I decided to go back home in Medellín and stay there with my family,” he says. “I started finding my voice again. When I was recording myself, I rediscovered so many things that I forgot because I was on tour for eight years. When I took this time for me in Medellín, that’s how I found Papi Juancho. That’s where I found my roots.” That full-circle moment is best exemplified on album opener “Medallo City,” a blend of reggaetón and salsa that serves as an ode to his hometown and humble Colombian beginnings.

The rest of the 22-track album plays out like an evolution of “Maluma, Baby” to the grown Papi Juancho. Whereas his previous albums were more romantic, he ups the sex factor here, playing the submissive role in the bedroom on “Boy Toy” and offering himself as a seductive way out from a bad relationship in “Salida de Escape.” Both after-hour romps make comparisons to Christian Grey from the Fifty Shades of Grey series. “I’m single right now,” he says with a laugh. “I’m enjoying my life. I live in Miami. My family is good. My personal life is balanced. I’m living happily. I’m not a kid anymore.”

Maluma has gone from an aspiring artist in Medellín to a global pop star. With that industry on lock, he eyes a new frontier: the big screen. He will make his acting debut in the film Marry Me next Valentine’s Day alongside Jennifer Lopez, and he wants to “keep growing as a businessman” by expanding his personal brand.

“I want to start my own record label,” he says. “I’m dreaming right now. There’s nothing that’s going to be in front of me to stop me from doing all these things I want to do and making all my dreams come true.”