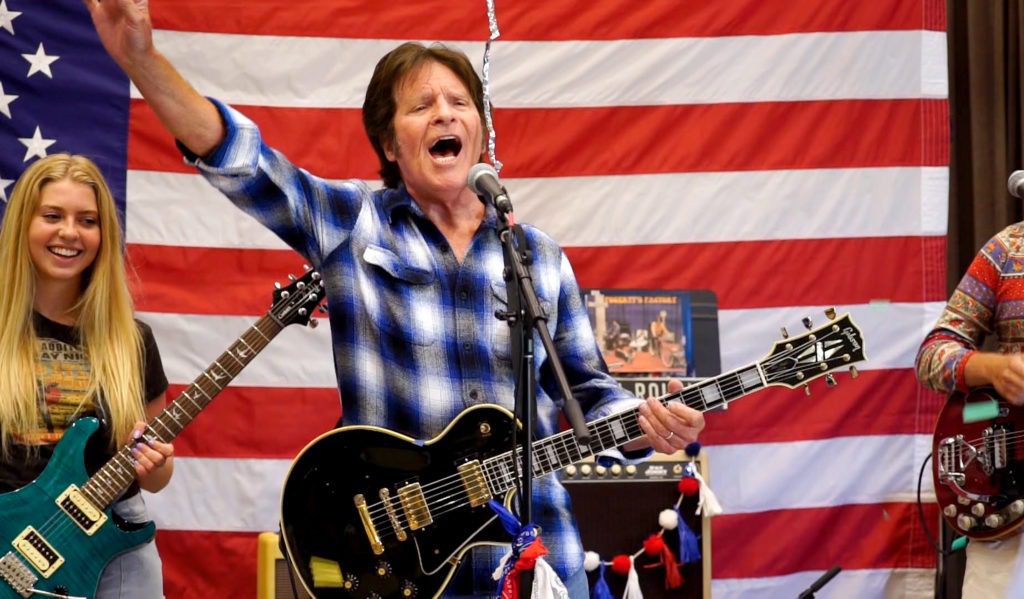 Last March, John Fogerty could sense there was trouble up around the bend.

The songwriter was set to play a string of West Coast casinos as part of his My 50 Year Trip tour, along with a Las Vegas residency at the Wynn. The first show was canceled. The second concert took place about two hours south in Laughlin, Nevada, which he tells SPIN was”so spooky” due to the looming pandemic. For the third casino gig, Fogerty said, “The whole time [before the show], I was thinking about how much I don’t want to [play it].” A few hours before taking the stage, he found out the show was canceled due to COVID-19 restrictions.

“You could just tell that something was afoot, and we didn’t have a cure,” he says of the pandemic. “When you have that scenario, it’s just really going to get worse until you have some sort of cure, meaning a vaccine.”

After being politely nudged by his label and his wife, Fogerty put his newfound downtime to use. He wrote the words “Weeping in the Promised Land” down for a song title “25 to 30 years ago,” but he was finally inspired to write and record that track in full, knocking it out in just six takes. The former Creedence Clearwater Revival frontman previously recorded a version of that song two years ago but scrapped it — he looks back on it as a “generic, but a nice song” with biblical references that “didn’t live up to the title.” Thanks to honing his piano-playing skills for a Jerry Lee Lewis tribute, Fogerty hit the keys and not the guitar — something his wife, Julie, suggested.

He initially started to revise “Weeping in the Promised Land” late last year, addressing the murders of George Floyd and Breonna Taylor, along with the turbulent times the U.S. continues to face.

“I’m old enough to know that the problems have been there all my life,” he says. “But it seemed to finally ignite a generation. They really reacted, like kids in the ’60s. They just were so offended, and they weren’t going to believe Mr. President telling them, ‘Oh, there’s nothing wrong, everything’s fine.’ And I was so proud of the young kids. The pandemic was bad enough, but then [there was] the absolute dismissal of people of color by our administration. That was just so wrong and so arrogant.”

The track is a somber call for unity at a time when the country is seemingly being ripped apart. “The message in this song is speaking to everyone, not half of us,” Fogerty says. “I told myself, ‘John, you’re supposed to be a songwriter. You’re supposed to be able to take hold of these things. But I hadn’t really done anything difficult in quite a while.”

He also compares “Weeping in the Promised Land” to CCR’s “Who’ll Stop the Rain” — another song where he “managed to express [himself].” He adds, “It wasn’t just some chords and a guy screaming at the sky.”

While in lockdown, Fogerty and his three kids played recorded streams together to stay busy and creative. That culminated in the fall-issued Fogerty’s Factory album, which includes new takes on classic cuts like “Centerfield,” “Have You Ever Seen the Rain” and “Down on the Corner.”

Less than two months later, Fogerty found himself in an unwanted spotlight. At his speeches, President Donald Trump played CCR’s anti-aristocrat, anti-war anthem “Fortunate Son” before several of his rallies, something that irked the Army Reserve veteran who was agitated by the lack of attention paid to the word.

“First of all, there does seem to be a very large amount of dysfunction on Mr. Trump’s part,” Fogerty says. “And the way that he preaches to his followers, and the followers actually buying into it, is very frustrating because we are all Americans. That’s the part that I really want to stress. I’m that guy who did ‘Proud Mary’ and ‘Green River.’ And the folks who perhaps misunderstand Donald Trump, a lot of them like my songs. The hopeful thing that we as Americans need to do to make ourselves a better America is for all of us to be included. [America] needs to be inclusive because then we will truly be a great country. I think we need for folks to calm down and listen to what our problems really are, and then try to address them.” On Sept. 11, 2020, Fogerty issued a statement denouncing Trump’s use of the song and later issued a cease-and-desist to the president’s campaign.

Though CCR’s rollicking swamp rock recalls a different tumultuous period of American history, the songs remain part of the rock and pop music fabric. “Bad Moon Rising,” a song apropos of the times, was recently voted the top song of the 1960s by SiriusXM listeners on the station’s Top 300 Songs of that decade countdown, besting songs like Jimi Hendrix’s “All Along the Watchtower,” The Mamas & the Papas’ “California Dreamin’” and Marvin Gaye’s “I Heard It Through the Grapevine.”

“That’s pretty good approval,” he says, marveling when I broke the news. “I feel like the underdog football team that just knocked off the big guys.”

It’s most rewarding for Fogerty that his late ’60s anthems — when understood by listeners with the intended message — continue to resonate. But even at 75, he feels like he has more to offer. Now that “Weeping in the Promised Land” is out, he’s working on new songs that will comprise his first album of strictly originals since 2007’s Revival.

“You get a great sense of satisfaction in the most humble way,” he says. “It’s a great sense of pride that the songs are still played, that they still mean something to people, and it helps me to feel that I’m in it musically. Rather than everything being in the rearview mirror, which is the way it could have been, I feel like I’m looking at the front of the vehicle, through the windshield and seeing where this road might take me.”