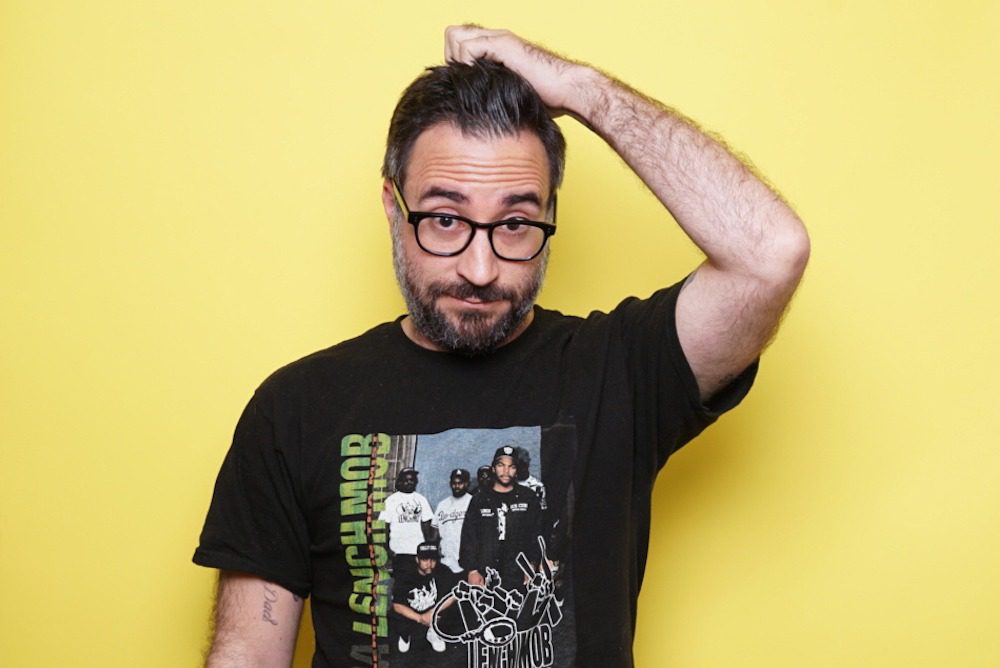 With everyone sequestered and self-quarantining due to the coronavirus, we’ve asked our favorite artists to come up with playlists that keep you entertained. This edition is by comedian and former KROQ DJ and Host of The No-Sports Report podcast Jensen Karp:

Like a lot of bored Americans in quarantine, my wife has taken to baking. It’s been a rare nice side effect of the pandemic, especially when reaping the benefits of her newly learned shortbread recipe. Before the pandemic, I wouldn’t even say I was a “fan” of the traditional Scottish biscuit, but here I am, 2 months into hiding from COVID-19, nervously locked in my home, eating it by the pound, eased by its comfort. And as surprising as it was at first to be downing sugar and carbs like they’re necessary food groups, I now understand my new desert infatuation.

You see, what I’ve learned from talking to other Americans terrified of the virus and the long-lasting after-effects we’ll feel for years, especially on my new podcast The No-Sports Report where I talk to bored athletes, is that we all want to grab ahold of the familiar. We want these comfort foods in ALL aspects of our lives.

I was a morning show DJ at one of LA’s most storied alternative radio stations, only to be let go at the beginning of coronavirus because management was “going in a different direction.” AND THEN LISTENERS FREAKED OUT. I didn’t see that coming, but I realized quickly it’s because the voices they know, the DJs they’ve been friends with for years, were leaving when they were needed the most. You can’t make changes during an emergency, you can only lean on the familiar. It’s like if someone took my wife’s shortbread away from me (p.s. someone should at this point).

So this is an incredibly eclectic playlist I concocted with comfort in mind. Something I’ve been playing when things get too heavy or the endless possibilities of doom start swirling in my head. It’s shortbread for my ears. I hope you can enjoy it too.

Pusha T – “Come Back Baby”
King Push is the greatest rapper alive and Daytona still reigns as the best hip-hop album of the past 5 years. Don’t @ me. This upbeat standout track still gets constant rotation from me, and lyrically shows the difference between him and some kid famous for rhyming while eating tide pods on TikTok.

Paramore – “Hard Times”
My other favorite album of the past 5 years included this gem, regularly labeled as Hayley Williams’ record about “depression,” but I see it as art for COMING OUT OF depression. As someone who has suffered from internal sadness, I’m the first to ask: Why not dance when you’re free and clear? I think Hayley agrees.

Alec Benjamin – “Annabelle’s Homework”
This songwriting wunderkind is the future of pop. He’s a thoughtful storyteller and when I imagine a post-pandemic universe, I smile knowing that Alec will write about it with care.

Christopher Cross – “Ride Like the Wind”
Yacht Rock has always calmed my nerves, and I’m not sure why. Maybe it’s the warmth of a Casio or the soul of a sax or the fact that all the singers from this genre look like one of my childhood Little League coaches. Who knows?

Run The Jewels ft. Greg Nice and DJ Premier – “Ooh LA LA”
This is the last new song I remember hearing before the world went to shit, so it harkens to a time when I didn’t have to worry about Tom Hanks’ health. I’ve been a massive El-P fan since Company Flow and Def Jux, so I marvel at the longevity of his deserved career. This song goes and anyone still employing the underrated Greg Nice deserves kudos.

Mark Morrison – “Return of the Mack”
I graduated high school in 1997, and for some reason, at that time, I was asked to contribute to a time capsule. The plan was to open it 20 years later, but whichever high school student was supposed to reunite us in our late 30s, appears to have forgotten about it. So as a result, a CD single of Mark Morrison’s “Return of the Mack” now sits somewhere underground with my handwritten letter that reads, “I dare 2017 to have a better song.” Spoiler alert: it didn’t.

Das Efx – “Looseys”
I admit this song is a forgettable album cut by the duo most remembered for basically stuttering as a rap style. At best it’s a C- of a track. BUT, it is the only rap song ever released addressing uncontrollable diarrhea and Irritable Bowel Syndrome, and for that reason alone – it’s in the Songwriting Hall of Fame. (It’s not really, but what does truth mean these days anyway?)

Rex Orange County – “New House”
I didn’t know this generation needed its own Randy Newman until Rex came along. This specific sonic roller-coaster feels new and fresh, which is almost an impossible task for any other 21-year-old songwriter in 2020. Anything he releases I download, but this one is by far my most played.

Apathy ft. Locksmith & Wildcard – “Block Island Sound”
It’s an underground boom-bap banger that samples the Fraggle Rock theme song, which should be enough to warrant the playlist addition, but also these three lyricists shine bright and leave no survivors in case you need more convincing.

Anita Baker – “Caught Up in the Rapture (Single Version)”
If Tom DeLonge is right, and we are indeed not alone, I propose we broadcast this Anita classic into space as the first offering of peace. This song feels like a warm couch blanket you’ve had since childhood, keeping you safe and comfortable.

Royce Da 5’9” – “Boom”
When we look back at COVID-19, from a hip-hop perspective, a few things will stick with us forever. Whether it’s the health struggles of legendary Geto Boys member Scarface or the sudden passing of New York mixtape staple Fred Da Godson, the virus has supplied its share of bad news and tragedy. But it did also give us one legendary night, when producers DJ Premier and RZA went head-to-head in a beat battle on Instagram, rattling off their hits, with viewers arguing over who stands supreme. My personal winner was Premier, who sealed the deal by including this underrated track from one of Detroit’s finest.

SWV ft. Wu-Tang Clan – “Anything (Old Skool Remix)”
An important part of my origin story is how good I was at doing the Running Man in middle school. Does it do anything for me as a grown adult in 2020? Absolutely not. But like Al Bundy mentioning his four-touchdown game at Polk High, this song reminds me of my dancing salad days and it instantly makes me feel fresh as hell.

DJ Jazzy Jeff & The Fresh Prince – “Then She Bit Me”
Everyone knows Will Smith was a rapper before he became an international box office sensation thanks to hits like “Parents Just Don’t Understand,” “Summertime” and “Getting’ Jiggy Wit It.” But do they know about this weird-ass track where nothing makes sense and he basically describes a David Lynch directed acid trip? WELL, NOW THEY DO.

Kenna – “Freetime”
Sadly ignored when it was released in 2003, Kenna’s “New Sacred Cow” was my favorite album of the aughts. It sounds like if Oingo Boingo was produced by the Neptunes, which is the hybrid we deserve. I’ve found myself returning to this first single during quarantine and it’s probably for a very on the nose reason – wanting to find any moment without this pandemic on my mind. It’s hard to escape, but songs like this one, and everything else on this playlist, sure do help.