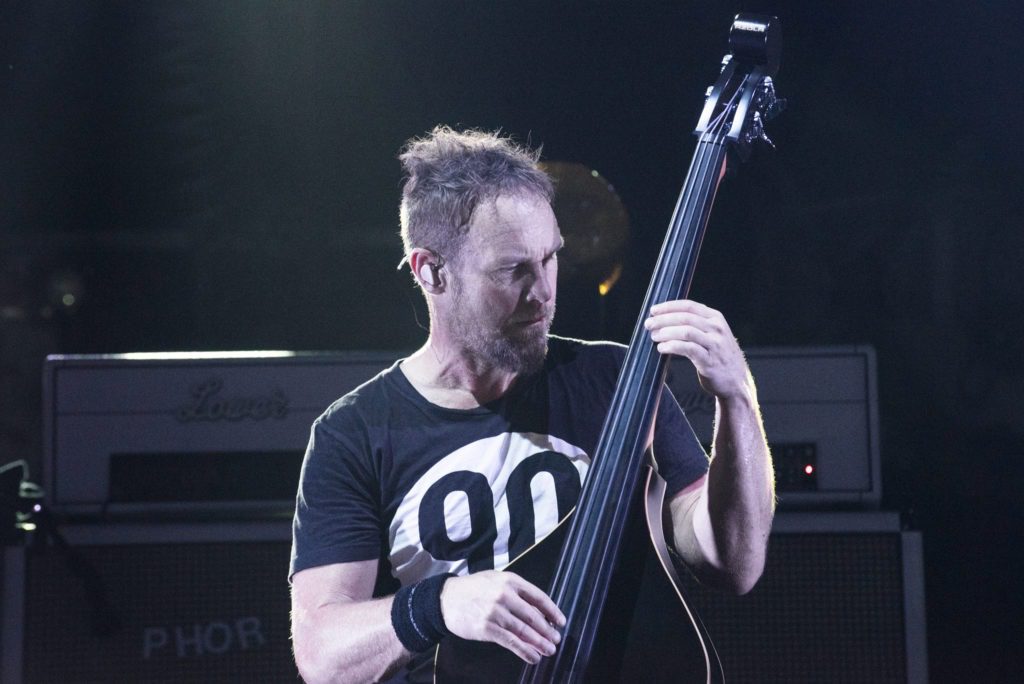 Jeff Ament should be in Europe right now and Pearl Jam should be hitting their stride playing in front of tens of thousands of fans in support of this year’s acclaimed Gigaton. But you know the story by now.

When Pearl Jam postponed the first leg of their U.S. tour in March and, later on, the European one, fans from around the world were bummed, especially when the band learned that fans from 12 different countries were headed to Toronto for opening night. The band’s light crew was already in Albany and the rest of the team was set to arrive the following day.

Forced into a tough decision with only two days to figure out how they were going to impact so many people’s lives and livelihoods for the next year, Pearl Jam ultimately had no choice — especially after Ament’s niece, a nurse, shared horror stories.

“All you needed to do is talk to a couple of people that were nurses or healthcare people to find out how horrible it was,” Ament, 57, says over the phone from his hideout in Montana of the tense days prior to the postponement. “We didn’t want to be a part of that.”

So what did he do besides leaving Seattle for Montana? He started writing. And writing. And writing. In a few weeks, he had enough songs to comprise a new EP. Sick of watching the news, Ament says that writing proved to be a better way to channel his angst and anxieties during the early stages of the coronavirus pandemic.

With five minuscule songs in a shade under seven minutes, the collection, titled American Death Squad, refers to the obvious. Hint: you can tell from the art, the roots of which stem from a design Ament cooked up for the aborted tour.

“It’s interesting as I was actually doing some… we did a couple of t-shirts for the tour and we did one for Europe. And I did this collab with a guy from England called God’s Keys,” Ament says. “The first thing we did was like call Euro Death Squad and it was basically like a collage of all those super right-wing European leaders. Then we were going to do one for the first U.S. leg then everything got blown out and I was like,’ Well, I’m just gonna, I’m just gonna take that idea.’”

Trading texts with ex-Red Hot Chili Peppers guitarist Josh Klinghoffer, who was set to open for Pearl Jam and is also writing new material, helped Ament maintain some kind of creative normalcy as things were up in the air.

“He’s like, ‘I’m just trying to write.’ I go, ‘Yeah, I’ve been writing a song every day.’ He’s like, ‘Really?’ And I was like, yeah, there’s a lot of them that are pretty crap,” Ament admits. “But I almost feel like I never got to use that muscle for this long of a period of time. So it almost feels like it’s, like, more fun and easier than ever.”

So he shut the radio off, didn’t watch cable news (though he would read it once a day), and got to work.

The five songs on the EP were written in the first week of quarantine when Ament says he got into “Bob Pollard mode” and just cranked out tunes.

“It makes it easier to finish something you can sort of finish something in three or four hours,” he says. There were two distinctive sides, one of him on guitar and the other on piano, and its intensity is captured on the 57-second ripper “Killer.”

As for Gigaton, as Josh Evans has said, Pearl Jam started work on it in 2017. As Gigaton moved the band forward sonically for the first time in years, Pearl Jam’s DNA (“once Ed sings and once Mike starts playing guitar, it becomes a Pearl Jam song no matter what it is”) remained the same. The previous two records, Backspacer and Lightning Bolt, were made with longtime collaborator Brendan O’Brien and they were comfortable with “super-tight arrangements and no wasted spaces,” whereas on Gigaton, they explored more.

“Right when we sort of hit a really good groove, the Rock and Roll Hall of Fame thing [the band’s induction in 2017] happened and we sort of had to pivot,” Ament explains. “We knew it was gonna happen, but just coming out of something like that, it just changes the whole thing. We didn’t want to focus on anything nostalgic because we’d started a record that we felt like was as good as anything we’ve done in a long time. We got to do some cool stuff, you know, we got to play “Alive” with [original Ten drummer] Dave Krusen and that was fantastic. But that’s a pretty nostalgic act. For me, the most exciting part of any record is a song that’s a little bit outside of anything we’ve done up to that point.”

Also, he says, that was some “life stuff” that happened, like “family stuff and friends dying.”

But performing “Dance of the Clairvoyants” for the first time at the All in WA fundraiser helped return a sense of normalcy.

“I hadn’t listened to any of the rehearsal stuff since we postponed the tour,” he says. “It made me even more bummed out because I was like, ‘Fuck, man, that was really starting to sound great.’ And a song like ‘Dance of the Clairvoyants,’ like, that was such a studio project…you could hear it really forming more into who we are and how we play.”

With lockdown not ending any time soon, the band can’t get in the same room, although it doesn’t mean they can’t rock out.

“I mean, no matter what happens, hopefully we can make another record at some point. Even if we have to do it, sort of like, separately,” Ament says. “We have the technology, so I think we could do it like where it was all of us in a room as long as we had like a boy in a plastic bubble or Wayne Coyne Flaming Lips balls or something that we can play inside of those things. We all have plenty of time on our hands so when the time is right, it shouldn’t be too hard. I’m sure everybody’s stockpiling riffs at this point.”