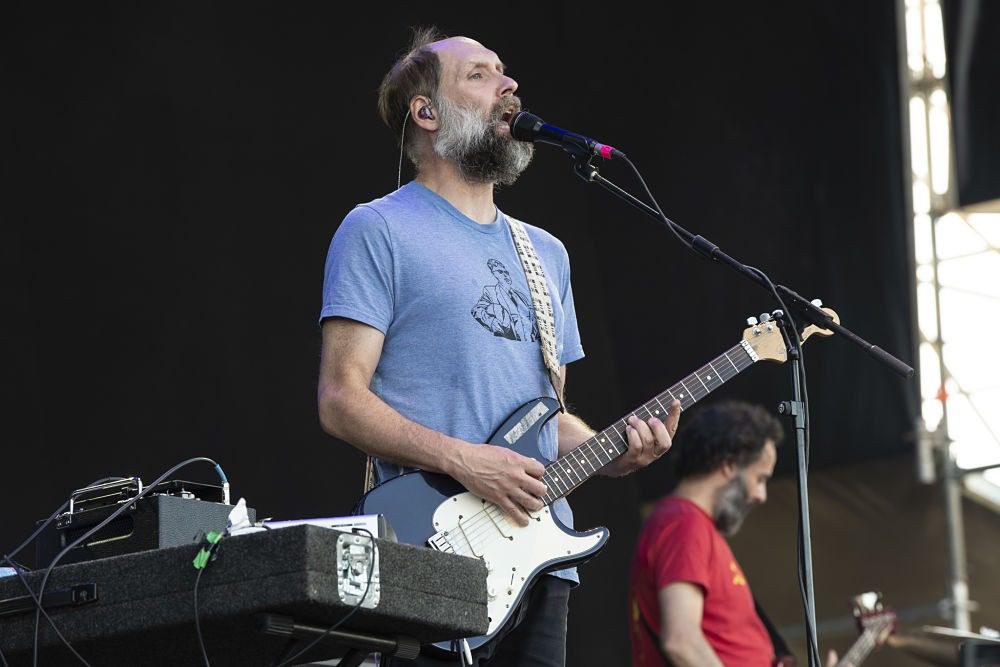 Sometimes your favorite band gets sick of being themselves.

“We started doing a ton of covers when we switched rhythm sections a few years back – maybe 2015,” Built to Spill frontman Doug Martsch explained over the phone from the comforts of quarantine at his home in Boise. “Brett Nelson and Scott Plouf had played in the band for 15 years or more and both quit at the same time. So we got a new rhythm section and together we learned a ton of Built to Spill songs, but also a bunch of covers – part of it was to try to make the whole thing more fun. Jim Roth, Brett Netson, and I were kinda tired of playing Built to Spill songs, so… [Laughs.] Learning a bunch of covers was really fun and kind of informed this whole thing.”

“I feel like he was energized by the music,” Martsch says of the shows they played with Johnston. “We felt pretty good about that. So maybe he’d be into the record… At the same time, as we packed up to leave, I approached Daniel and said I hoped we had the chance to do it again and, I don’t even know if he said anything. It was less than noncommittal. [Laughs.] He was like, ‘yeah, I don’t know…’ Which, you know, was just perfect.”

Built to Spill has dates on the books to tour this coming fall if all things clear up with regard to the COVID-19 pandemic. Martsch said that the band’s upcoming (as of now) tour won’t be in support of the Johnston album. He hopes that they’ll have a new record finished and released by the time the tour commences (whenever that may be). So, as it stands, this tribute to Johnston was just for fun, and a mere tip of the cap to one of their esteemed musical influences.

SPIN: What was your initial exposure to Daniel Johnston’s work?
Doug Martsch: The first time I heard him was on a compilation [A Texas Trip] – it was like a punk rock compilation with some Butthole Surfers kinds of things. The song itself that I can recall was actually a collaboration between the Butthole Surfers and Daniel. It was kind of psychedelic, or maybe actually it was more of an audio collage of weird delays and Daniel Johnston kind of singing about how he doesn’t want to die and stuff… So, that was my first exposure, and honestly, that didn’t necessarily do too much for me with regard to seeking him out. I thought the song was interesting, but I still had no idea who he was or that kind of thing. Then I read about him… This was sometime in the late ’80s – maybe ’87 is when I heard that record. That’s when I learned he was a Texas-based musician with mental health issues – but I still hadn’t heard much of his music. Then I heard Yo La Tengo’s Fakebook, and, more specifically, their take on Daniel’s song, “Speeding Motorcycle”… That’s when I realized he wrote great songs. Shortly thereafter – this was 1990 – I bought my first record of his, 1990, and I immediately fell in love with him – he became very influential.

Did Daniel inspire your own songwriting?
Maybe. We covered one of his songs on one of our earlier records, which I think was the impetus behind his booking agent reaching out to us to see if we wanted to play with him. But, yeah, I’m actually pretty embarrassed about what we did to that song (“Some Things Last a Long Time” from The Normal Years). It’s such a beautiful tune, but, yeah, listening back to it, I think of that song as being so beautiful and delicate and us just rockin’ it out like that – it just seems so random and arbitrary to me in retrospect. Like, what were we thinking? What was going on? And maybe at the time there was something to it, but, I don’t know, I’m a little ashamed of it at this point in my life – there’s a lot of things I’m ashamed of that I did back then. [Laughs.]

It was the ‘90s, man. You guys put that thing out at the height of the grunge era when folks like Kurt Cobain and others of the like were championing Daniel and paying homage to him. The guitars were heavy and distorted in and around that scene…
We definitely wanted to do our own thing to it and change it up, but, yeah, I don’t know… I think maybe you’re on to something. Actually, now that I think about it, I remember when we did that song – we were doing it for something specific, but I can’t remember what that thing was at the moment – it was between that and a Public Enemy song. I think I’d be far more embarrassed if we went the Public Enemy route. Can you imagine Built to Spill covering Public Enemy in any kind of form? Oh my God… I don’t know what I was thinking. That’s a dodged bullet, for sure.

So let’s fast forward nearly a quarter-century. Built to Spill is faced with the task of serving as Daniel’s backing band for the last two shows of his “final tour” in the fall of 2017. How’d the idea for those shows come about?
His booking agent works in the same office as ours – it wasn’t hard to reach me. [Laughs.] I was psyched right away. I mean, who wouldn’t want to make music with a legend, you know? We were all really psyched about it. I mean, we knew it’d be weird and maybe difficult or whatever, but it was definitely one of those things that we spent little time thinking about. There was no question that we wanted to take those gigs.

Were there rehearsals or were the setlists written the day of the gigs?
It’s kind of funny actually. First of all, they sent me a list of maybe 150 songs that Daniel was willing and able to perform, and another of songs he absolutely would not play… So I picked out like 30 or 40 that I thought would be fun and that might work well together. I kept telling his people that we had to rehearse – just getting up on stage and playing was not an option. But, uh, that just wasn’t possible. He didn’t have the energy. So our only rehearsal was during soundcheck before the first show.

I don’t know that that list was too purged. I think it was pretty arbitrary. Honestly, I feel like the songs he chose to play popped into his head on a day-to-day basis. So it wasn’t very exact. There were some songs that we wanted to do that he didn’t want to touch, and there were songs that they said he wasn’t willing to do that he actually wanted to include…

How was the experience of working with Daniel in that capacity?
I kind of put together a good set, you know, order of songs that I thought would make a good show and have a good flow to it. So I had written out an actual setlist and when we met him at soundcheck before that first gig, he noticed I had a songbook where I had written down all of his songs – all the chords and words and whatnot. He grabbed it and started looking at it… It was all in alphabetical order. He was like, ‘Let’s do it this way. This is the order I want to do it.’ And I was like, ‘Well, that’s just alphabetical order. [Laughs.] You know I thought maybe we could work it out a little bit better…’ And he was adamant, ‘No, no, this is what I want to do…’ So, that’s what we did. He’d skip a few here and there, but, yeah. I feel like he skipped all the songs we worked a little harder on as a band leading up to the shows. [Laughs.] But it was fine, it was fun. It was his thing really. I did love it though. I really did. Daniel is such a powerful singer. He kind of had trouble keeping pace with us, but he’s a really powerful, loud singer… You know, on the surface he has that kind of wimpy voice in a way when you think about it – at least to me – but it’s not, he’s a really powerfully strong singer.

Trying to lead the band and follow Daniel was a challenge, and in that moment, it’s hard to tie any personal feelings to it. But when we’d finish the shows, people would just come up to me crying, talking about how emotionally powerful it was – I’m glad they had that experience. I really am.

And now here we are on the cusp of Built to Spill releasing a tribute album of sorts. How do you feel about the finished result?
Well, you know, we rehearsed a bunch for these shows we did with him on our own. A friend came over and was listening to us during these sessions and she was like, ‘I want a copy of your versions of these songs.’ So it was kind of in the back of our mind – to actually record the songs, just for our friends, really. But we didn’t really get around to it until maybe a year after the gigs with Daniel. I think it was the fall of 2018 – maybe August. We had a few days off in-between shows of the tour we were on and instead of going home we went to our friend Jim Roth’s studio. The plan was to demo new Built to Spill material for the upcoming album, but when we got there I didn’t really feel like playing those songs. So I proposed we do the Daniel Johnston songs instead. So we did. We just fucked around and recorded them with the intention of sharing it with our friends. By the end of those few days, we thought they sounded so cool that we ought to see if it was something worth releasing as an actual thing. The idea was to just put it out and sell it at shows, thinking it was something that the fans would enjoy.