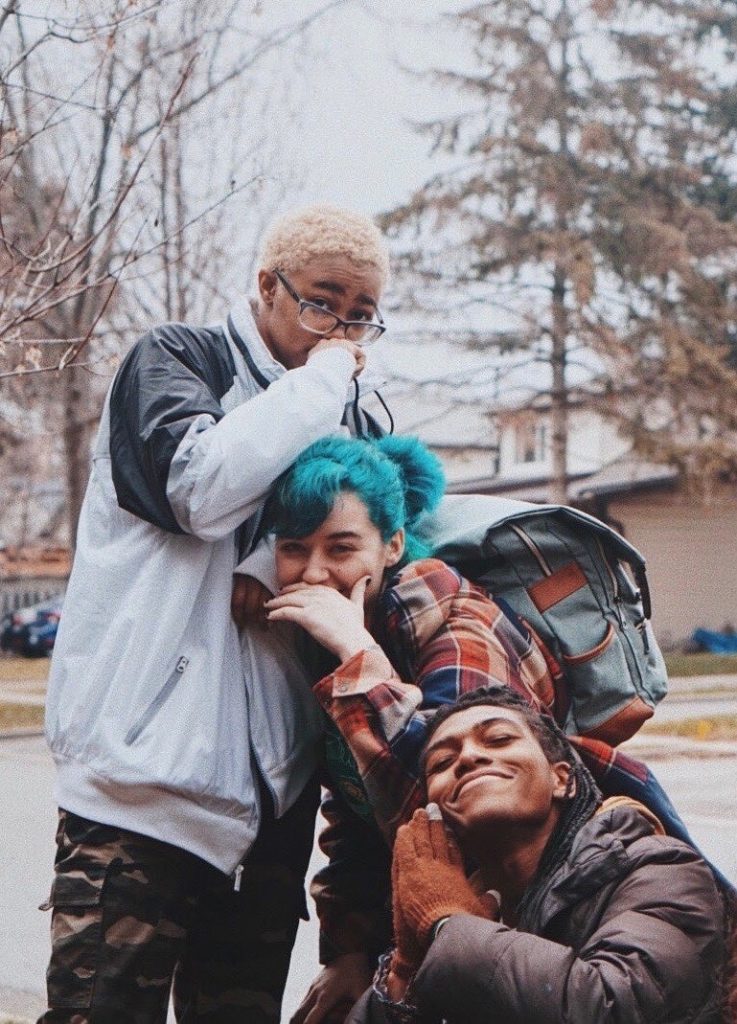 Eric Christopher—vocalist of Hospital Bracelet—was already considering music as a full time job before making it a reality. “I was debating this decision for weeks,” they tell SPIN over the phone on a December night. “Then, it was on our last day of tour and I ran into my friend at our last show. They were talking to me and were like, ‘I dropped out of medical school and now I’m a full time musician in three bands and I love it more than I probably would’ve ever loved being a doctor.’”

The following day, Christopher, 19 now and 18 at the time, called their mom to tell her they were dropping out of college. It was the day before they were supposed to return to classes. This tour—due to the pandemic—ended up being the only one they were able to go on, but it was enough to convince them that it was what they wanted to do.

“And we had, like technically, a bad tour. We were renting a van and we went through three vans because we got into an accident and had two flat tires at one point,” they say. “There were times when we didn’t have places to sleep. There were shows where we got paid like ten dollars and the opening band walked away with like 80. It was these really dumb problems that should’ve just ruined my mood and I still had the absolute best time of my life.”

Hospital Bracelet wasn’t meant to be able to do this.

What started as a simple way for Christopher to express themselves and share intimate songs with whoever would listen turned into a three-piece band that thousands of people love. It was the 2019 EP Neutrality Acoustic that went viral online—a stripped-down collection of four beautifully-written songs with lyrics like, “You are the tumor in my brain / I am the poisoned blood in my own veins.” “I didn’t really have anything going for me,” they say about the time when they made the EP. “And the only consistent grounding I’ve had for my entire life has been making music.” When it blew up, the only thing they could do was keep it going.

South Loop Summer is the candid follow-up to that vulnerable EP, out Jan. 12 via Counter Intuitive Records, which tackles everything from addiction to toxic relationships. Christopher’s main influences stray more toward Joyce Manor than Elliott Smith. The riffs are playful, the instrumentals bombastic. It flirts with midwest emo and math rock, but for the most part sticks with ingenious pop-punk. “Sour OG RPG” is probably the fastest and most exhilarating track that best showcases the band’s anger with caustic riffs and even some yells.

This aggravation may come, at least partially, from Christopher’s history with professional wrestling. After starting at 14 years old, they traveled the country participating in tournaments and consequently, messing up their back. “It turns out that you’re not supposed to purposefully fall all of the time,” they say with a laugh. “That’s, like, really bad for you.”

These loud moments are balanced with more tender, unrushed songs. “Sober Haha Jk Unless” is better produced and involves more instruments than Neutrality Acoustic, but it’s still unguarded and full of exposed lines: “I don’t really know if I want to overdose / Maybe I’m just constantly scared of being on my own.” It was written when Christopher was having a heart-to-heart with their roommate; their roommate was coming to the realization that they had a problem with drugs, and Christopher was past that point and trying to figure out where to go next. “You want to do everything you can to help the people that you’re close to especially the people who are going through the same things that you’ve gone through,” Christopher explains about the meaning of the song. “But sometimes there’s only so much you can do to help others when you’re also trying to work on yourself.”

And, at the time, they had a lot to work on. They were in the process of untangling the complexities of recovery, redemption, religion and acceptance. “In my worst of worst moments, I’ve definitely hurt people that I loved and cared about and that’s one of the biggest struggles with addiction,” Christopher says, “is trying to make up for the things that you messed up on.” This meant accepting successes, learning how to treat themselves, and letting growth happen. This meant attending AA meetings and reckoning with religion and faith. This meant being alone and having a healthy support system.

The mess of everything is captured on South Loop Summer. When Christopher sings, “Maybe I’m just too messed up to succeed” on “Sober Haha Jk Unless,” you can picture them grappling with whether or not they deserve to get better. Or when they coo, “Near death experiences have me thinking maybe / That everything I’ve worked for will have a purpose,” on the slow “Summer Friends,” you can imagine them gathering as much hope together as possible. Maybe the most realistic rumination is on the title track, when they intone: “Maybe my life will constantly be miserable / Or maybe I’ll keep making things I’m proud of.” They know, to some extent, that it will be a mixture of both, and it’s not a terrible deal.