Gone Is Gone Doesn't Want to Be Called a 'Supergroup' 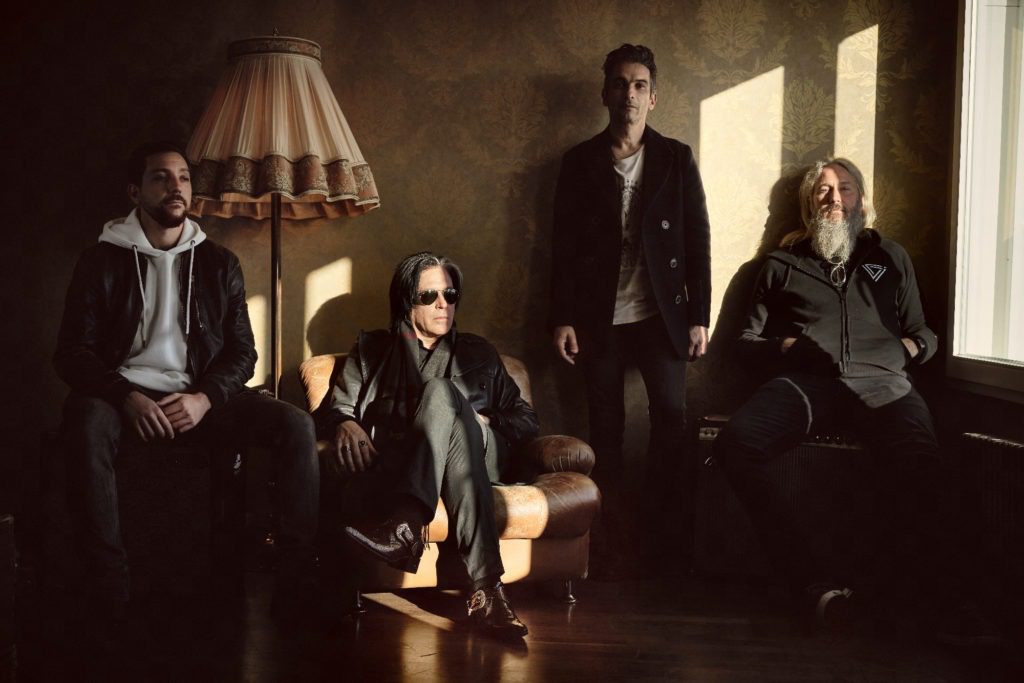 Gone Is Gone may be billed as a “supergroup” of sorts, but the Los Angeles-based quartet sure doesn’t want the negative connotations that go along with the title. For bassist/vocalist Troy Sanders (Mastodon), drummer Tony Hajjar (At the Drive-In), guitarist Troy Van Leeuwen (Queens of the Stone Age) and multi-instrumentalist Mike Zarin (composer and founder of Sencit Music), the almost-cinematic rock group is just another project they get to work on when their dayjobs don’t monopolize their time.

After announcing themselves with a self-titled EP in July 2016 and a debut full-length not too long after, it would’ve been understandable if the group decided their schedules would never allow for a second album. But four years later, they reunited for If Everything Happens For A Reason… Then Nothing Really Matters At All, out Dec. 4 on Clouds Hill.

Of course, every band comes with its own stories, so SPIN spoke with Hajjar and Van Leeuwen to get the details on how Gone Is Gone got to their latest release without being totally gone.

How does being a part of Gone Is Gone compare with your primary bands?
Tony Hajjar: We all have bands with certain characters in them, and that combination of those characters makes that music, whereas this combination of these characters makes this music. It’s kind of fun to kind of look back at our catalog and then listen to this new record to see how we’ve grown into this band that doesn’t sound like our other bands. At first — when you’re trying to start something new — you do what you usually do and bring what you usually bring, but once you get to know people, you start to get influenced and react differently. That’s what’s cool about being in this band for me.

Troy Van Leeuwen: To add to that, it’s about playing with and learning from everyone for me. I’ve always told myself that it doesn’t matter who you are or what kind of band or what kind of talent level is in the band, you can always take something from it. I’m so lucky to be around all these people that I’ve been able to learn a lot from, and hopefully vice versa. It’s also nice to know that everyone wants to be here really bad, because if we didn’t really have the passion for this band, there’s no reason it would’ve lasted after the first year-and-a-half with everyone’s schedules.

With a few years between the two, how much does If Everything Happens For A Reason… Then Nothing Really Matters At All differ from Echolocation and the first EP?
TH: I first called Troy Van Leeuwen after Mike [Zarin] and I had a conversation about bringing in a guitar player for this because we would always say ‘Let’s jam,’ but it just never worked out. He was extremely busy, and I had just finished a run with At the Drive-In, but it was like if he makes the time and I make the time then we can’t waste that time. So then we went from writing the songs on the EP to where it felt more like a band on Echolocation — we literally jumped in the studio and started recording it like a band, which wasn’t the original plan. That became a more traditional record, and now here we are with this record where there’s nothing traditional about it. There’s nothing that sounds like anything else we’ve done in the past or in our other bands. It’s a complete offshoot of where we want this band to go.

Obviously no one is playing live shows right now, but outside of quarantine, what was it like to bring each of your different styles and energies to the stage aside from just the recording studio?
TVL: Well with the scheduling of all of our other bands and stuff, it’s impossible for touring, so it tends to be special when we do get to play a live show. It’s usually one or two rehearsals, and then it’s time to jump on stage. It keeps us on our toes and allows for mistakes — which, the older I get, the more I like, because not only are they fun, but if you repeat them enough times then it becomes a part of it.

Hajjar: It keeps you on the edge of your seat, especially right now since nobody can fucking play live. It’s obvious that all of us want to get out and play again, and when that does happen, I think it’s going to make us all appreciate what live music is in this way that we never did before. I think it was taken for granted by any music fan, including me. For us, getting together and playing a show is exciting because it’s a one-off and we have to make it special each time. It’s not like it’s just another Tuesday night, so we try to mix it up, add more electronic elements to it, break things down and do different versions of songs. It’s kind of fluid that way.

Speaking of that fluidity and experimentation, what has it been like to collaborate with each other and explore uncharted territory for each of you musically as well?
TH: I got a chemistry degree when I was in my 20s, so I always look at everything as a reaction. We used different ingredients, so it’s going to be different. But one thing we knew before we ever played a note was that it would be really fun and, hopefully, very powerful because we were going to put in everything we had. I’ve been lucky enough to be in bands that allow me to breathe a little bit, because being on stage, I just play drums. But I’ve been lucky to be able to share in lyric writing, melody writing, and on this record, Troy and I produced it. I’ve been allowed by my friends in all these bands that I’ve played in — from At the Drive-In to Sparta to now Gone Is Gone — to be in a situation that I could be a contributor in a lot of ways. I always feel I’m very lucky in that respect because a lot of people who play my instrument live don’t get to do all of that.

How different is it to be launching a new project now that you’re all decades into your career rather than when you did it as teenagers or in your 20s?
TVL: I’ll meet kids who are just learning to play guitar or starting their first band and they’ll ask me ‘What do you recommend?’ or ‘How do I do stuff?’ and I always tell them ‘Don’t wait for anybody. Get out and make mistakes.’ If you want to get in the van and tour street corners somewhere because you just want to do it, you can do that right now — or at least when things open up, hopefully in the near future — to get out and play in front of people that you don’t normally play in front of.

As a touring musician for 25 years, I still like it, and I still want to go play somewhere else. That’s where different people have different mindsets. So for us — even though we didn’t get to play live much after finishing this record since we’re all locked down in quarantine — we still got to a point where at least we’re working and finishing something. Of course it changed over the course of the recording, but nothing ever goes the way you’d like it to be when you’re in a band. If you want to start something, you better get ready to have some disappointments at every stage of starting a band. When you’re a musician in a band and you’re given lemons, you throw them at the drummer. That’s how you make lemonade.

TH: Yeah, he makes lemonade by throwing stuff at me. It’s great.