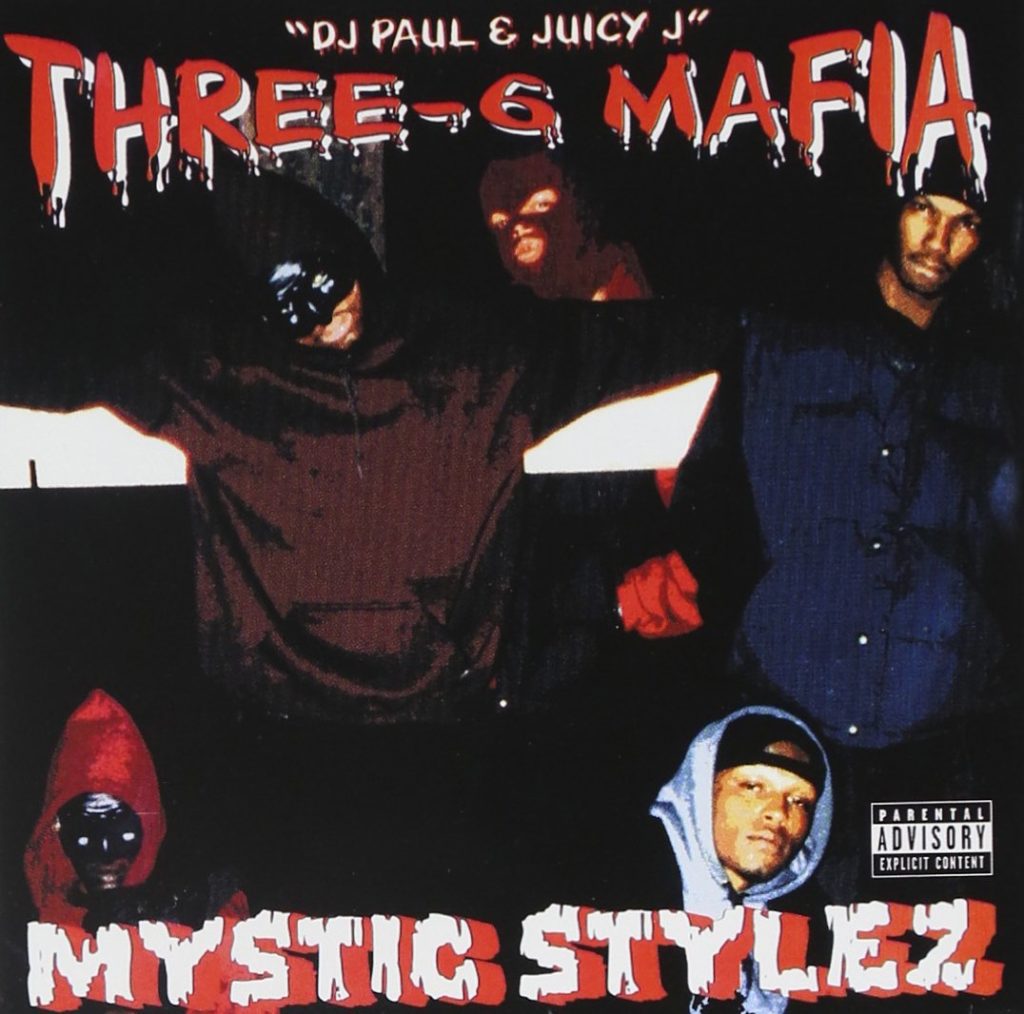 Mystic Styles of the ancient mutilations
Torture chambers filled with corpses in my basement
Feel the wrath of the fuckin’ devilation
Three 6 Mafia: creation of Satan

By the time Lord Infamous uttered that incantation, it had been seven years since the FBI threatened N.W.A. over “Fuck Tha Police,” four since Scarface had “visions of bodies being burned,” two since Method Man and Raekwon recorded a skit about vivisecting victims with red-hot hangers and rusty screwdrivers. Hip hop had already expended a good deal of shock value, but on their debut album, Three 6 Mafia took it further.

Mystic Stylez, released 25 years ago tomorrow, laid the groundwork for Three 6’s path to domination. Combining pulpy horror, gangsta rap, and murky sounds from the Memphis underground, Three 6 landed on a formula that would fuel one of the late ‘90s and early 2000s’ most dominant Southern rap dynasties like Cash Money or No Limit. But perhaps even more impressive than that initial reign is the legacy: in the years since the group’s splintering, their mystic styles are periodically exhumed and reanimated by new generations of dark-rap necromancers. Modern subgenres like crunk, trap, horrorcore, and ratchet owe blood debts to the Mafia; the now-omnipresent triplet flow is the late Lord Infamous’ way of communing from beyond the grave; bygone Three 6 classics “Slob on My Knob,” “Chickenhead,” and “Who Run It” still rack up royalty checks from modern samples and interpolations.

The signature Three 6 sound — eerie sounds pulled from horror soundtracks, video game scores, and dusty R&B records, along with prodigious, demented rapping and infectious group chants — would come into clearer focus as the ‘90s progressed. “It spoke to a different generation of Memphis,” fellow Memphis rapper 8Ball said in Netlfix documentary series Hip Hop Evolution, “It was like this young, cocaine-snortin’, gangsta-ass Memphis shit. There’s no God, it’s all debauchery.”

But despite some downright evil-sounding music on Mystic Stylez, Three 6’s debut also contains a few outliers that nod to influences outside of Memphis, hinting at a desire to break out of an intensely insular scene. “You know, back in those days in Memphis, you didn’t play no outta town rappers,” Three 6 contemporary DJ Squeeky said, “You were playing Memphis rappers and Memphis things that started and stayed in Memphis.”

N.W.A. and Geto Boys were two clear inspirations for Three 6’s hell-raising, and on songs like the narrative-driven “Long Nite,” the soul-sampling “Back Against Da Wall,” and the charmingly chintzy “All Or Nothin,” it shows. The most jarring departure, though, is the positively mellow “Da Summa,” which would sound more at home on 8Ball and MJG’s 1993 debut, Comin’ Out Hard. As Juicy J recalled, Three 6 were having difficulty getting their grisly music on the radio so they sent the “laid back, groovy” track to local DJs. “They were like, Cool, we’ll play this one,” he said.

Maybe those concessions are why Mystic Stylez, independently released by Paul and Juicy’s Prophet Entertainment, sold over 200,000 copies (quite a feat in the years before No Limit and Cash Money albums regularly went gold and platinum). More likely, it’s a product of cities outside of the L.A. and New York hubs finally coming into the limelight, defining their own sounds, and creating their own rap markets in the mid-’90s.

While opposing coasts warred with each other, Three 6 had disputes of their own closer to home. The one on the marquee was a beef with Cleveland’s Bone Thugs-N-Harmony sparked by ownership claims to horror themes and Infamous’ triplet flow. It spilled over into Mystic Stylez’ “Live by Yo Rep (Bone Dis),” which fittingly opens with Infamous brandishing razor blades, pitchforks, acid, and cauldrons of hot grease at his Midwest foes. All told, this conflict would be short-lived — Three 6’s Gangsta Boo would collaborate with Krayzie Bone just a few years later, and although postponed, Paul and Krayzie are slated to participate in a friendly beat battle this year.

The less publicized, but ultimately more legacy-threatening controversy that hovers over Mystic Stylez and Three 6’s origins is DJ Squeeky’s accusation of intellectual property theft. “They were really on the ‘stealing people’s music’ thing back then,” the producer said of the group’s early days. Squeeky had a booming local industry of his own in the early ‘90s, operating out of Memphis’ Orange Mound neighborhood alongside 8Ball and MJG, DJ Zirk, Al Kapone, Tom Skeemask, Tommy Wright III, and future Three 6 member Kingpin Skinny Pimp. Squeeky’s production style, especially his rapid-fire hi-hat and snare hits, laid the bedrock for what’s now instantly recognizable as trap music.

But Paul and Juicy did more than just take inspiration, according to Squeeky. “Their whole style, their beats, hooks, everything were based on shit I did. All the hooks that you heard from them [earlier on] were samples they took off my mixtapes. They were making their own songs off them. That’s how they got started.” Indeed, Paul’s earliest mixtapes are littered with riffs on Squeeky’s material, and some of it even persisted past Mystic Stylez. Skinny Pimp’s Paul-produced 1996 song “Lookin’ For Da Chewin’,” for instance, is a remake of a Squeeky original.

Squeeky has a point, but this type of recycling was commonplace within Memphis’ incestuous early-’90s mixtape circuit. Look at DJ Zirk’s 1993 track “2 Thick” — Zirk uses two samples that Paul would also flip on Mystic Stylez, but also samples an even earlier Juicy J solo track. It went both ways; it’s not exactly Drake-style cultural tourism. Even within Three 6’s discography, hooks are repeatedly recycled and updated (see: the ‘93, ‘95, ‘98, and 2001 incarnations of “Break da Law”). On Mystic Stylez, Paul and Juicy splice in new members’ older tracks, instantly assimilating existing fanbases. As Memphis’ breakout stars, Three 6 are simply the easiest target. Their early output is clearly indebted to local forebears— not just Squeeky, but also his predecessor DJ Spanish Fly, as well as Memphis’ first successful rap export, 8Ball and MJG — but there are clear reasons why they became a national sensation, and they have little to do with swagger jacking.

Between the wizened Lord Infamous, the fiery Gangsta Boo (just 15 at the time of Mystic Stylez’ release), and Juicy’s prodigious brother Project Pat, Three 6 contains three MCs who could vie for spots in a Top 10 Southern Rappers of All-Time list. Between them, Paul, Juicy, Crunchy Black, Skinny Pimp, Koopsta Knicca, Playa Fly, and dozens of other affiliates, Three 6 offer a vast variety of flows and personalities. More so than any other rap clique in history, they own the posse cut. Even on Mystic Stylez’ more traditionally structured songs, the “hooks” are just chants that Paul and Juicy would test at the club for maximum impact: Breakdalaw; Live by yo’ rep; Tear da club up.

Three 6’s image was another definite catalyst for their success. Horror-inspired aesthetics were rampant in Memphis at the time — Gangsta Pat and Al Kapone also mean-mugged the camera in front of crucifixes in ‘95 — but Three 6 were fully immersed in it. Paul and Juicy mined B-movie scores and pressured everyone else to match the music’s unsettling atmosphere. “I was rapping with five psychopaths,” Gangsta Boo says in Hip Hop Evolution. “I wanted to be as sinister as possible, so I bought a witchcraft book and my momma kicked me out the house when she found it.”

Boo — the scarily precocious Earl Sweatshirt to the rest of Three 6’s Odd Future— dubbed herself  “The Devil’s Daughter” and rapped about dismemberment, stealing souls, and tossing bodies into coffins, her commitment to the bit topped only by Lord Infamous. Everyone else played along on Mystic Stylez, but as the years went on, Three 6’s satanic gag fell to the wayside, although Infamous and Koopsta Knicca occasionally continued to dabble in the dark arts. In 2010, Juicy cleared it up for good: “We do not worship no devil, man. People ask me that shit every day. There’s no way you could have had our success worshipping the devil.”

A quarter-century later, Three 6’s diabolical image is easily understood as part of a wave of music-industry shock value that elevated the careers of Marilyn Manson, Cannibal Corpse, DMX, Eminem, and countless others. Mid-’90s gangsta rap was a backdrop that already lent itself to aggressive posturing; Three 6 just brought Satan along for the ride.

Despite its many highlights and groundbreaking qualities, Mystic Stylez isn’t necessarily Three 6’s “classic album”— after all, it’s only got four Gangsta Boo verses and zero from Project Pat. They’re a sprawling, self-referential group best enjoyed immersively, through playlists or DJ mixes that offer more scope than a single album can. Up through the mid-2000s, Three 6 would continue to add tricks to their repertoire and pull off improbable feats (including, against all odds, an Oscar), eclipsing whatever potential Mystic Stylez portended. But their debut remains pivotal, the moment when Paul decided, as he says on “All or Nothin,” “Fuck all this underground tape shit,” and went for it.