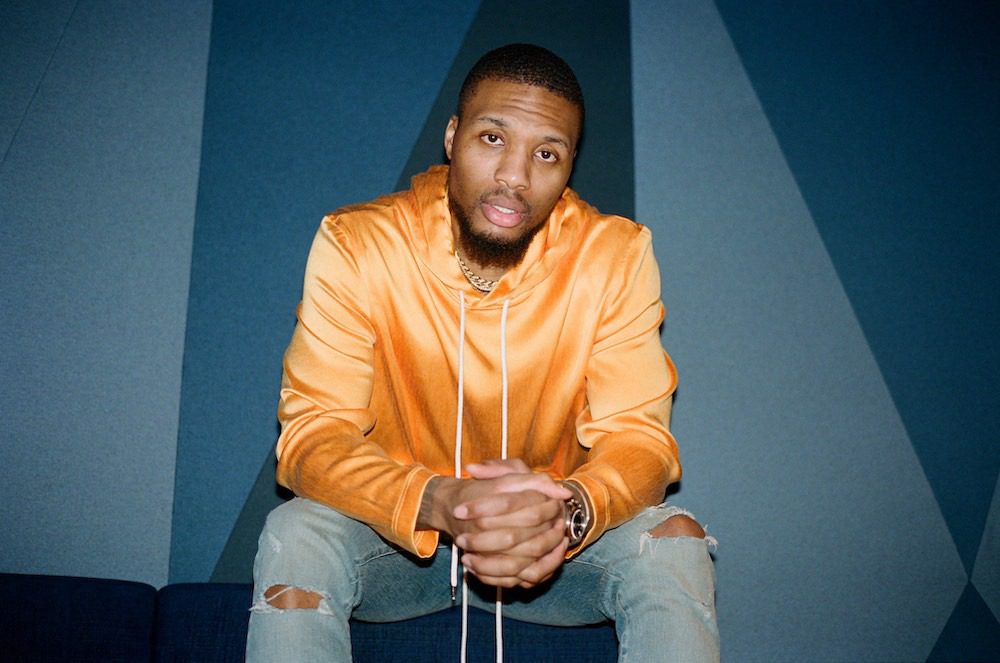 The NBA season, like much of our lives, may currently be on hold due to COVID-19. But Portland Trail Blazers All-Star guard Damian Lillard, one of the league’s coldest, most rigorous dudes has had no trouble keeping busy, thanks to his robust second career as a rapper. The preternaturally calm and collected player went viral last year for both making one of the greatest shots in NBA Playoffs history as well as his memeable reaction and hopes to bring the same heat to his music career.

Recording as Dame D.O.L.L.A., Lillard has already collaborated with the likes of 2 Chainz, Jadakiss, BJ the Chicago Kid, and Lil Wayne, who is such a fan that he’s appeared on all three of Lillard’s surprisingly good LPs and has said that Lillard is skilled enough to rap for a living, something even the dean of NBA rappers, Shaquille O’Neal, told us. Since 2013, the Lillard-curated #4BarFriday series has given up-and-coming rappers a platform to shine in front of his 7.6 million Instagram followers over beats from producers like Mannie Fresh, Hitmaka, and Murda Beatz. It’s this event that has grown into its own community as its popularity exploded outright during the lockdown. SPIN chatted with Lillard about what’s next for the multi-talented star.

SPIN: #4BarFriday has really been blowing up under quarantine, with all sorts of folks from the NBA and music worlds getting involved and showing support. It has to be cool to see this community you’ve built become this big thing.
Damian Lillard: It’s been received well, not just by the artists involved and #4Bar community, but by professional athletes and musicians. It’s been really cool seeing all the people commenting and sharing the performances and getting the word out about what we’re doing and these aspiring artists. That’s been the goal all along—I first started this to launch my own career and let people know I could rap and it’s turned into a thing where I was inviting other artists in and creating a community, a creating a movement where people could find these artists and find talent, and hopefully, it turns into an opportunity for them.

It really has turned into a whole event.
Yeah it’s turned into a thing where we hold our own stuff, like hosting these cyphers every Friday. We’ve also done events at All-Star Weekend, we’ve made music together—I’ve featured on songs with multiple #4Bar artists. It’s developed a lot since I started it and it’s definitely going in a direction I envisioned it going.

Do your success and intensity on the court inform your performance in the booth?
I would say the main comparison is my confidence in what I’m producing. When it comes to my music I know I’m not trying to be a person that I’m not, you know what I’m saying? I’m rapping about stuff I know I can stand on. I run into so many people who make their criticisms, “you should do this, you should do that,” you know, but my approach of knowing it’s genuine, that it’s authentic, that’s the way I’m going to go about my music. With my career in the NBA, I’m able to go into the fourth quarter on the big stages and perform because I’m confident in what I can do.

You know you’ve put the work in.
Yeah I mean, I’ve already worked out twice today. I’ve done conditioning, I’ve done a full-body lift, I’ve been in the steam room and I have another workout tonight.

Not the typical rapper workout.
I’m taking the steps to be the best version of myself. Whether it’s music or a game I know I’ve put myself in the best position to be successful. And then when I am successful, I’m not out there acting all crazy and surprised by it because it’s a result of what I’ve already done. So I think they’re similar in that way—my performance on the court happens because of my genuine approach to the work. My music I’m confident in what I’m putting out there because it’s genuine, I’m not taking raps from somebody else or presenting something that’s not really what I’m like or about. Everything that I do is something I can stand on because I’ve prepared for it.

That reminds me of your rhyme in “Run It Up”: “Tried to give me scraps/I made them pieces to the puzzle.” What are your future plans for your music and #4BarFriday? I noticed you have a label now.
I’m in the process of trying to figure out the label thing for other artists. It’s easy for me to get a slot on stage during All-Star Weekend because I’m also Damian Lillard the basketball player, but I’m still figuring out how to best help out other artists. I want to figure that out before I start stacking up all these artists on my label.

You want to do it right.
Yeah. And as far as my music I just built a studio in my house and I recorded a few songs. I just did one with Shaq actually and I have a new single I’m dropping soon called “G.O.A.T. Spirit” and I think people are really gonna mess with it. It’s a step away from my last album towards the direction I’m going in now.

What was it like when you first started getting respect from the music industry?
It was cool because before other people knew I could rap, I knew I could rap, you know? I had been doing it for a while, so I felt like it was just a matter of getting on the right platform and getting people to hear it. Once I got on Sway I was like, “OK, this could be a viral thing because I’m gonna really rap. Up til then, it was just 4 bars here and 4 bars there — when I went on Sway it was something like 32 bars I spit on the spot and people were like “Well damn he can really rap!” Then people started tweeting at me, saying I needed to drop something. So then I started putting out these little freestyles on Soundcloud every Monday the whole summer. Looking at them now I think they’re kinda weak but people were still impressed with how I was able to put words together.

Years ago, when I first found out you were a rapper and I checked out your music I was a little shocked that an athlete was dropping so many quality bars. You’ve been underestimated throughout your hoops career and often been the underdog. Was trying to prove you’re a legit rapper similar to that?
I will say it plays a part as far as the mentality. In basketball, I love the challenge of people saying “He won’t ever win in Portland.” “He won’t ever win MVP.” When people say stuff like that, I’m not offended by it—I just look at it and say OK, I’m going to work even harder in the offseason and make the commitment to come back better than ever. That’s my mentality. With music it’s similar. People will say “Oh he needs to get back in the gym. He needs to get some shots up. They got swept in the playoffs that year, he don’t need to be messing around with music.”

They say it distracts you.
Yeah but that’s the balance that works for me. So it’s the challenge of putting out good music, getting people to like it and showing them a side of me they don’t normally see and winning them over. And I’m going to make sure my training is perfect before I do any music stuff. So when the season comes I’m going to have a great season—then what’re they gonna say? When we got swept by New Orleans, that summer I didn’t do no music because I was so focused on getting swept in the first round—that don’t sit right. We gotta make up for this. Then I’ll get back to my music. So then last year we have a lot of success in playoffs and make the Western Conference Finals, and I drop an album that’s received better than anything I’ve ever dropped. People were really messing with the music and loving it. So then there’s nothing left to say. Now all the sudden it’s like “Dame’s a great rapper”—it might have took some time, but you win them over.

The work pays off.
Yeah it’s like “They said this? Well then let me work and plug this hole.” It’s not that I’m trying to prove it to them as much as it’s me looking in the mirror and saying “We did struggle. Let’s try and fix that.” I’m not really trying to prove nothing to no one. I’m going to live how I want to live. I’ve made the playoffs six out of seven years and had a great career and I still have time to win a championship, to win the MVP and to still make good music. I can’t complain about what I’ve accomplished and where I am in either of my careers.