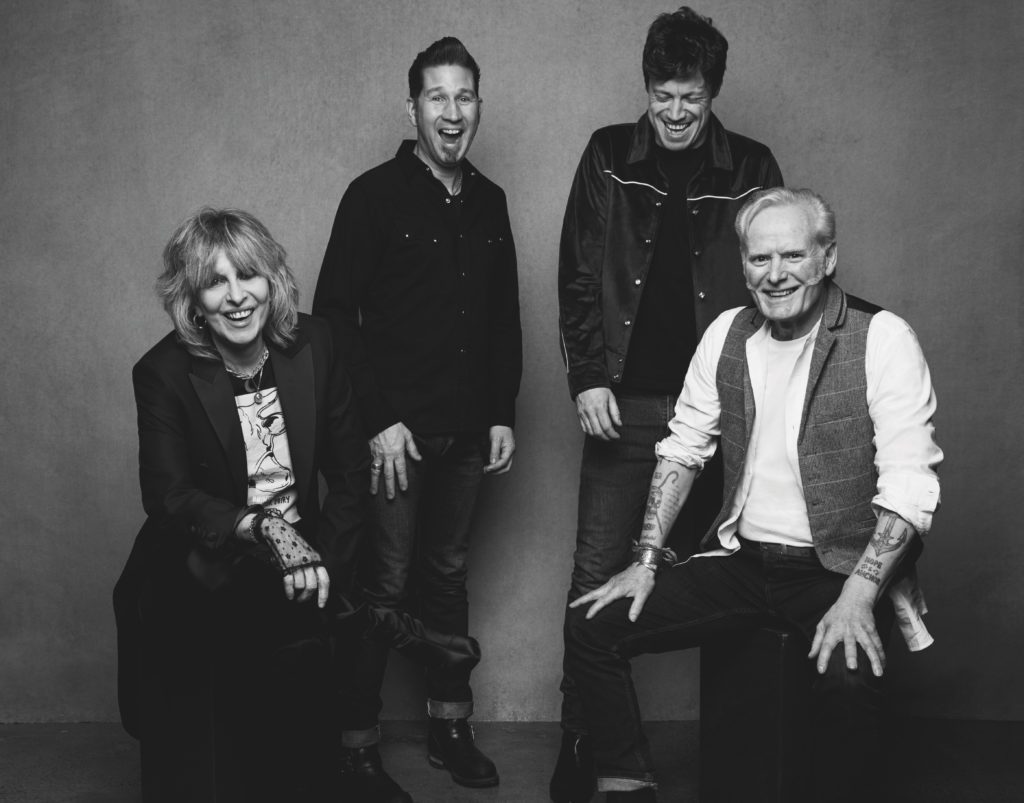 “I’m having the time of my life,” Pretenders’ frontwoman Chrissie Hynde quipped when asked how she’s holding up. It’s a strange sensation releasing an album during a pandemic and not being able to tour. However, music has remained a grounding force for her and her bandmates, as evidenced by the band’s latest (and 11th overall) album Hate for Sale, which came out last week.

For Hynde, the album is a work that was years in the making and a long-overdue opportunity to finally capture the band’s live chemistry on a record. Despite technically being the first album in four years under the Pretenders banner, it’s the first to fully feature the band’s current touring lineup since 2008: Hynde, guitarist James Walbourne, bassist Nick Wilkinson, and founding drummer Martin Chambers.

“We’ve always wanted to do that, but logistically it hasn’t always come together that way,” Hynde says, noting the Rubik’s Cube of getting everyone’s schedules aligned.

She admits that someone who was better at planning might have been able to make it happen sooner. However, Hynde finds that people who “get in a rock and roll band aren’t really plan-makers, fixing-a-plan, having-a-schedule-type people.”

“I think the first thing that happens when you go on tours, you don’t know what day it is anymore. You don’t know if it’s the weekend or not,” Hynde says. “You’re living outside of time. I don’t know why it didn’t happen before. I ended up writing with different producers I was working with or writing on my own. So, I think at this point, we definitely felt like we really wanted to do this. We had the time. That’s what it’s all about. It’s about time.”

It also marks the first full-length album where Hynde has shared songwriting duties with Walbourne. The guitarist has toured with the band since 2008 and has also recorded with a variety of others, including Jerry Lee Lewis, Depeche Mode’s Dave Gahan, and the Rails. “I’ve been wanting to write with him for a long time,” she says.

She also credits veteran producer Stephen Street for creating a dynamic sounding record that fits snugly within the band’s catalog. “He deserves a huge amount of credit for the sound of this record,” she says.

SPIN caught up with Hynde over the phone from her home in London recently about her experience recording the new album and why she has a guarded appreciation for the band’s debut which is celebrating its 40th anniversary.

How have the last few months influenced your perception of the songs on the new album?
I’ve been doing other stuff [such as Bob Dylan covers], so I haven’t thought about it too much. Once you finish a project, you just sort of move on. I have to be yanked back to talk about it and think about it a little bit, and hopefully, one day be able to tour the songs. I haven’t thought about this album in relation to the last few months.

If anything, the Bob Dylan songs James and I have been doing, every single one of them seems chockablock full of relevant stuff. We’ve done them in the last two months. And it’s Bob Dylan, so he’s very prophetic, and he says stuff that sounds like it was written about this week, and he might’ve written it 40 years ago. But it’s uncanny how relevant his stuff is.

Hate for Sale marks the first time that this touring lineup has recorded together. What did it mean to be able to showcase the chemistry?
Oh, it was fantastic. I have played with these guys for a while. I played with Nick and James on Break Up the Concrete. But the way that came together, that was 2008, Martin wasn’t there simply because we were in L.A. It was [Shangri-La Music label creator] Steve Bing, who died recently, who put the whole thing together, and we were going to do it so fast that it was kind of an impromptu thing. I talked to Steve and I said, “I’m not really sure what I want to do.” And he said, “Well, how about this?” And I went, “Yeah, let’s do it.”

Why did you feel it was the right time to share creative control with songwriting?
Oh, I always share creative control. You could say it’s my band, but certainly, it’s collaborative. Especially with James, because he’s the guitar player, and a rock band is ultimately about the guitar. It’s about the other things, too, but that’s really my focus, or anyone’s focus if it’s a rock’n’roll band.

The album’s title track references the band’s love for punk, especially the Damned. Can you talk about what it’s like channeling punk and other influences in the band’s sound?
We didn’t write that with the Damned in mind. We wrote it, and then we thought, “Hey, this sounds like a Damned song.” So, it felt like that.

And of course, we love punk music. It’s unusual to find someone that’s got real virtuosity and can still play with a punk sensibility. Because once you get that virtuosity and you play good, I’m not talking about myself, I’m still at the punk level myself, but with someone like James, a lot of the times it’s just going into more of prog rock. It just gets too sophisticated, and clever, and a little bit intellectual. But James never goes there. His hero is Elvis Presley, he really digs this traditional…I suppose almost country-influenced, gospel-influenced, all the influences that fed into rock and roll.

And of course, James Honeyman-Scott, because any guitar player I play with they like the Pretenders or they wouldn’t be working with me. And the Pretenders sound was really created by James Honeyman Scott, my original guitar player. So, anyone I work with has already been a fan of his, and therefore that he gets his sound and is influenced by him. I put that down to if there’s any continuity over the years, that’s why, in the sound. Other than my voice, which you can’t get away from that.

Why do you think punk is relevant these days?
Well, punk is just really deconstructing what’s out there a little bit, and bringing things back to basics, which is just a rock staple. I suppose you could make punk music with electronic. You can do it however you want, but as far as getting some instruments, it’s almost a deconstruction. Getting back to basics I think if I had to describe punk in musical terms.

I don’t know if it’s more relevant now than ever…But there’s a lot of everything at the moment, and it’s hard to keep track of it, for me anyway, because it’s in another format now. It’s online.

Which is why I loved working with [Black Keys singer-guitarist/fellow Akron native] Dan Auerbach because even though  Dan Auerbach is from the next generation to me, that’s how his head works. He still thinks in terms of that. And I think most people that go into studios and love the kind of music that we like, they are still thinking in terms of albums. There were tapes and CDs, and then different formats, but that side one and side two thing.

And things change, but it seems to me people will return to what they really love, despite what the industry is trying to drive them toward. Because for whatever reason with the industry, things change. Like vinyl. They weren’t producing it anymore, but people like it because they like going into record stores and it sounds better. So, it came back, not because of the industry but because of people. People liked it, so they kept buying vinyl. And the band was delighted because they wanted their music to come out in vinyl.

It seems like everyone was really embracing their roots.
That was also a very concerted effort. When we talked about it, there was always a reggae-influenced track. Because that was certainly in the punk days. That’s all anyone listened to. And we came out of the punk days.

And then, those other riffy songs like “Turf Accountant Daddy” …I grew up listening to Top of the Pops, which is kind of a cheesy television show, but everyone watched it. And it was a kind of sound that very English. That’s what pop music was back in the day. Now, pop music in modern terms is something completely different.

And we wanted to do that traditional-sounding R&B song “You Can’t Hurt a Fool”, which was a title James read somewhere, and I think it’s really a book, and we both love to read. And he said, “Oh,” and I said, “That’s a fucking great title. Maybe we’ll write a song about that.” We really crafted that song to get that traditional R&B. I don’t know what R&B is these days because I don’t recognize it anymore as R&B, but what R&B was up until probably the ’80s, Ann Peebles, and that sort of stuff. I don’t know where it went after that. It started going into more electronic music. Because I still think in terms of instruments, people playing instruments.

The band’s debut album turned 40 this year. That’s quite a feat to be still going strong after 40 years.
Well, it’s not really. Not really. It’s not because what else are you going to do with your life? If that’s what you like doing. Other people get a job, and then they retire, and then they take up their hobby. But I just think just cut to the chase. Take up your hobby in the first place. Then you don’t even have to retire. And you don’t want to retire because you still like doing what you do.

I imagine that whenever touring resumes, that’ll be a relief for you and the band.
Well, we’ll just climb back on the horse as usual. And no one knows when that’s going to happen, or how that’s going to happen. The one thing that I’m looking forward to is not playing, well, we probably won’t be playing in those huge places anymore, supporting huge bands, simply because I’d rather not. I like the summer sheds in America. That sort of thing. And play with an interesting lineup of bands I like, and not just have to play the greatest hits. Which is what you do when you’re a support band. Because really, you’re not playing to your audience, so you have to try to give them something they know…We can’t wait to tour the album.