Chloe X Halle Push Kindness During the Ungodliest of Hours 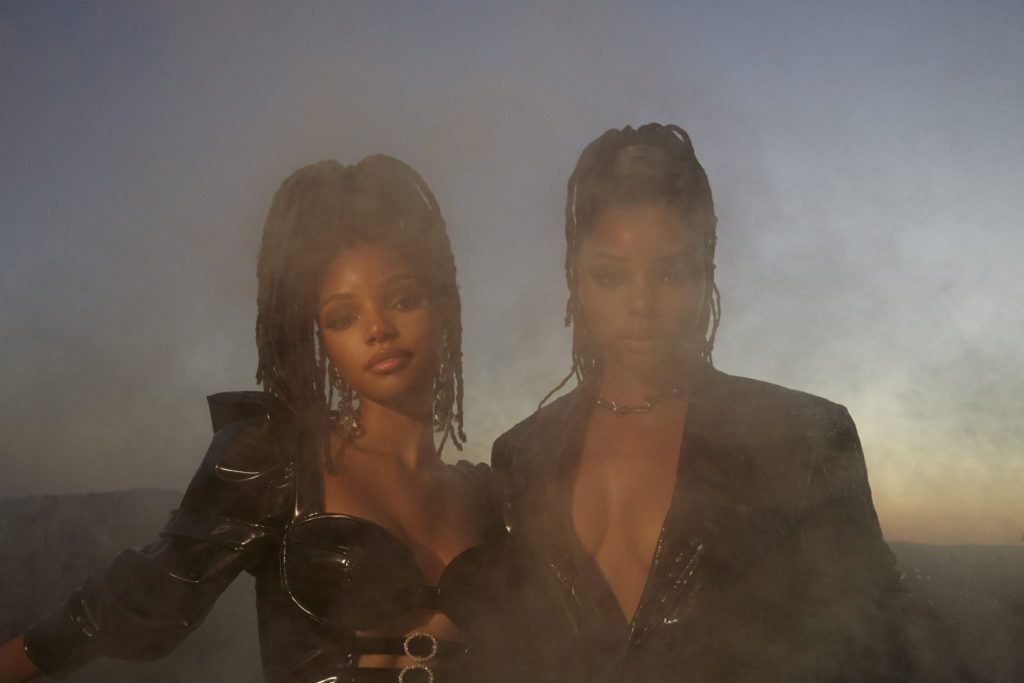 Chloe and Halle Bailey say they believe in “divine timing,” and the release of their sophomore effort, Ungodly Hour, is the perfect example.

Chloe x Halle, the soon-to-be R&B superstars with a collective DIY mentality that only the genre’s most admired sisters could share, recorded the album in October and soon realized the double meaning it would earn upon its June release. Chloe even compares experiencing 2020 to opening a fiction book for the first time. But amidst a pandemic and while protesters nationwide are seeking justice for Black lives, the sisters agree the album’s title parallels a “real-life ungodly hour.”

“I felt like honestly, in a weird, odd, twisted way, this couldn’t have come out at a more perfect time,” Chloe tells SPIN over the phone.

Ungodly Hour, which Chloe x Halle hope will offer fans a moment of healing, sees the Atlanta-born Bailey sisters harness their creative control, between executive-producing the 13-track effort and penning every track. It’s also a grown-up project for the Grown-ish stars, as Chloe says the album cover featuring her and Halle clad in black dresses and angel wings creates something of an “edgy,” “powerful” and “sexy” image out of the “angel persona” many have labeled them with.

The sisters have prided themselves on their ability to remain in the DIY driver’s seat for the last five years since signing with Beyoncé’s Parkwood Entertainment. And Ungodly Hour sets a new standard. Features from Drake confidant Boi-1da and ‘00s production giant Scott Storch, who chopped it up on their Billboard-charting hit “Do It,” might seem like reasons to step away from behind the boards. But these studio sorcerers sharing the booth with Chloe x Halle didn’t deter the duo’s vision at all; They only pushed them to flip each track further while retaining the cohesiveness of the whole.

“My sister and I, we still remained close to our musical integrity and stayed at the forefront of the process,” Chloe says. “And even after the sessions, we take the songs back home and we add more and more weird elements and our experimental sounds.”

These “weird elements” are what make the project the perfect crossroads between enchanting and eerie. Between sometimes haunting but always fairy-tale-worthy melodies on tracks like “Tipsy”– which Halle says are inspired by her love for jazz legends like Nat King Cole and Sarah Vaughan — and the record-scratching throwback harmonies which help listeners dive into cuts like “Busy Boy,” Ungodly Hour is testament to just how well the duo can flex their knowledge of musical history.

“Our father always taught us, as young women, we can do anything we put our minds to,” Halle says of growing up in Atlanta. “And at a very young age, he sat us down and taught us some structure and the toolbox, like similes and metaphors and how to tell the story with all of these tools. It’s always been very important for my sister and I to always take ownership and what we do because, at the end of the day, it is our story.”

And the story the sisters tell on Ungodly Hour — while not necessarily about the world being as kind as they are — is one that they felt was important to share, especially now.

“I feel like the goal mainly was to show that it’s okay to not be okay,” Halle says. “Sometimes it’s okay to fight these battles sometimes when you feel like you’re alone. And it’s okay to overcome it and get through it.”

It’s a message that anyone can get behind while we all wait for the world to open back up in uncertainty. Halle, who’s now preparing to star as Ariel in Disney’s upcoming live-action The Little Mermaid, jokingly admits there’s a place for it under the sea, too.

“I feel like, if Ariel were to listen to this album, she would really love the song ‘Lonely,’” Halle says. “Because, you know, she goes through that whole journey of feeling lonely and like she doesn’t fit in the world that she’s in and that she’s meant to be somewhere else.”

As for fans whose living on land isn’t temporary, Chloe says she hopes listeners can feel something more: the kindness the duo projects and the honesty they put on wax.

“I hope this album inspires whoever’s listening to be more kind to themselves. And it’s okay to not have yourself all figured out. Because my sister and I sure don’t. And we’re learning about ourselves every day.”