Brann Dailor on Mastodon Facing the Music, Life in COVID and 20 Years As a Band 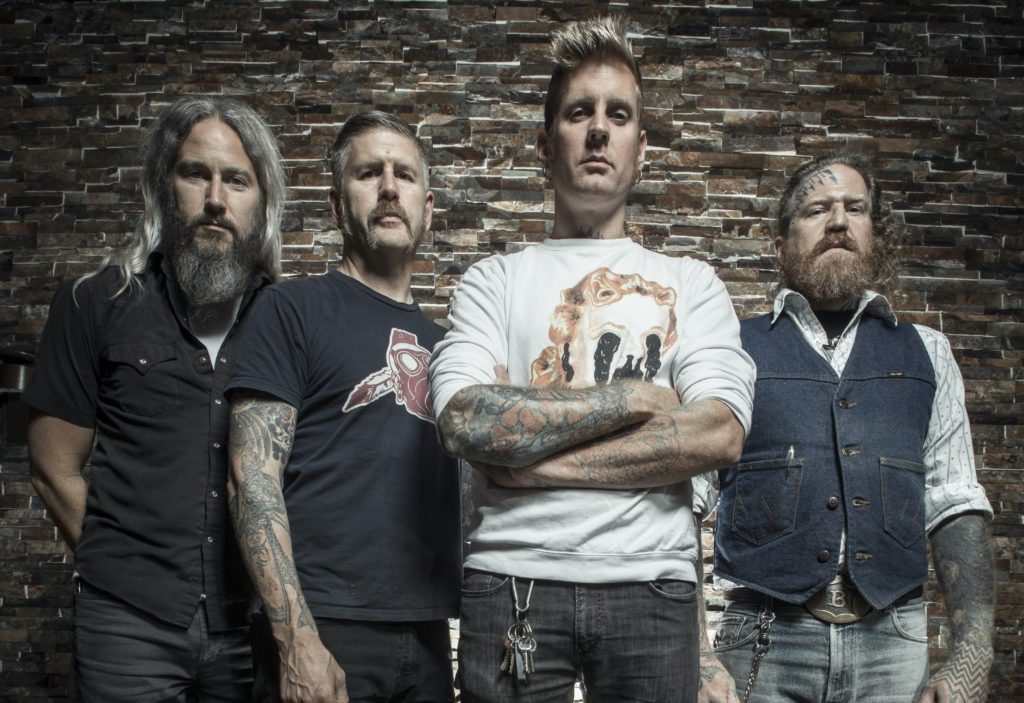 While you’ll have to wait at least another year for the new Mastodon album, the Atlanta-based hard-rock/prog quartet have assembled a collection of rarities that perfectly typifies what makes the band so beloved, and has allowed them to crossover to an audience that would otherwise never touch metal: They have fun. While so many metal acts are busy fashioning themselves as po-faced and pseudo-scary, Mastodon was busy covering Feist and appearing on Game of Thrones.

Medium Rarities is a grab-bag of left-field covers, soundtrack contributions, instrumentals, B-sides, and live recordings. Released digitally for the first time, the collection also includes previously unavailable, limited edition Record Store Day seven-inches, of which only the most die-hard Mastodon fans could physically own. If you still have a friend holding out on checking out Mastodon, this might be the perfect starter pack.

In addition to the band turning 20 this year, drummer/vocalist Brann Dailor walked SPIN through Medium Rarities, told us about contributing a song to the Bill and Ted Face the Music soundtrack, and how the new album presents a glimmer of hope amid the group’s typically darker, ominous sound.

SPIN: How long did it take to cultivate Medium Rarities? Did you have a good idea of what you wanted to include going in?
Brann Dailor: It wasn’t even particularly our idea, but we had this straggler track called, “Fallen Torches” from a few years back. We’re busy working on the new album, so we’re thinking about that. The song came about after we had collectively bought a building in Atlanta, and turned it into a rehearsal facility, for other bands to rent rooms and practice. Two of the major complexes in Atlanta were demolished a couple of years ago to make room for condominiums. That left hundreds of bands homeless, including ourselves. We found this building, tricked it out, and the last thing we did was build a studio. After we finished building the studio, we set up drums, mic’d them up, and wanted to see what it sounded like. We wanted to record a song, but didn’t have one written. We started writing, and I had a couple of riffs along with Bill, and when we put it all together, there was “Fallen Torches.”

Scott Kelly from Neurosis came to record and rehearse with us, because we were set to go on this European tour with him. We were going to do a Mastodon set, then he would come on and do all the Scott Kelly songs with us. The idea was to release “Fallen Torches” ahead of the tour as a promo because Scott sang on it. Cut to two weeks into the European tour, and the song still hadn’t been released. We had told the press about it, and some of our more die-hard fans were demanding, “Where is the song?!” We didn’t know, and I couldn’t tell you know what happened. There was some kind of bureaucracy or red tape that stopped it from being released. It just quietly went away, but the song obviously remained.

We thought about putting it on our upcoming album, and just kind of nestling it in there, but that didn’t seem like the right thing to do. We like our albums to reflect the time that we’re going through. There’s riffs that have been around for years that show up later, like the first riff on Emperor of Sand had been sitting around for 10 years, but never had a home. Our manager Kristen Mulderig said, “You guys have all these covers, b-sides, seven-inches, instrumentals and stuff from Record Store Day that have never had a proper release.” It was kind of revelatory for us, because that stuff existed in not-so-great versions on YouTube, but had never been properly put into a dustpan together. Medium Rarities is a way of finally releasing, “Fallen Torches,” but also a 20-year birthday cake of weird songs and shrapnel we’ve done throughout the years.

Let’s break down the Medium Rarities cover songs. How did they come into your life, and what do they mean to you? “A Commotion” by Feist.
That’s one of my favorite things that we’ve ever done. We were on the UK show Later…With Jools Holland with Feist in 2011. Every time we get asked to be on something that doesn’t traditionally have metal bands, or if we somehow end up at the Grammys, we feel on the outside looking in. We get there and it feels like we’re part of Make-A-Wish or something, like, “They’re letting us in! How cool is this! Keep your head down and don’t make eye contact with the famous people!” [Laughs.] We’re the red-headed stepkids, but it’s all self-imposed. As a metal musician, you feel looked down upon. It’s a leftover feeling from being a metalhead in the ’80s I think. Metal was such a bad word in the early ‘90s that even if you were in a metal band, you couldn’t say it out loud.

So, we had all those feelings going into the show. Bon Iver was there along with Feist, but they were all really cool. The Bon Iver guys came up to us and said, “We listen to Mastodon before we go on stage!” We were blown away, and Leslie Feist and her band were excited to meet us, as we were them. We all went out to a bar after the show and agreed with Leslie that we should cover each other’s songs, as a cool Record Store Day thing. That’s where the idea was born, but it sounded like a pipe dream. Musicians say these kinds of things all the time, and they almost always never happen. By the end of the night, you’ve started six side projects with whoever you’re drinking with at the bar. It never gets discussed again, and you’re just kind of embarrassed the next day.

But this time, someone from Mastodon talked about it in the press, but I’m not sure if it was Brent or Troy. If it wasn’t for that, it probably wouldn’t have happened, but that quote caught a little fire. We had to make it happen at that point, and that’s how the song came to be. It’s such a cool thing to trade covers, and I wish we could do more of it. Trading covers with a group or artist that no one would expect us to cover, like the Feist song, and vice versa, is so cool to me.

“A Spoonful Weighs a Ton” by the Flaming Lips
That was recorded in the same session as the Feist cover. I love The Soft Bulletin, and that record came out when I was playing in a band called Today Is the Day. We were in Europe doing a tour with Neurosis and Voivod. The Soft Bulletin had just come out, and the sound guy for Neurosis was using the first couple tracks to test the sound every day. Sound guys like to use particular songs to test the PA and bass levels to hear what they’re working with. They use the same song every day, and when the bass kicks in on “A Spoonful Weighs a Ton” that’s when he was really able to hear what he’s got and tune into the room. I started to go out for the tuning of the PA because I was loving the song so much. To this day, I love that song and that album so much.

Before that, I only really knew the Flaming Lips from “She Don’t Use Jelly.” I remembered that from a few years prior when things were getting real weird on MTV. They sort of disappeared from my life after that video went away. They were obviously still making lots of great music, but I hooked back up with them in 1999 with Soft Bulletin. We had the studio booked, and we figured that we weren’t going in there with just one song. The Flaming Lips were with us on Warner Bros. so they agreed to let us cover that for a Record Store Day exclusive.

Have you been a diehard fan of Bill and Ted since the first movie, or were you just a little too old for it in 1989?
I was right there for it. I was 14 and loved that movie. I knew Keanu from River’s Edge, and I can quote that movie from start to finish. It’s one of my all-time favorites. When Bill and Ted came out, I was like, “It’s Matt from River’s Edge!” Bill and Ted is just super fun, and a blast of a movie. It’s in the realm of Teen Wolf and Back to the Future for me, where if I’m bummed out, and I put any of those movies on, I always feel a little bit better. I’m 45, so all those ‘80s movies are my sweet spot. When we got the opportunity to do a song for Bill and Ted Face the Music, I was immediately like, “Fuck yeah, I wanna do that.” We named the song “Rufus Lives” because we’re big George Carlin fans, and wanted to honor him.

In an interview with Metal Hammer, you mentioned that there’s a lot of ‘super pretty moments’ on the new record, but ‘it’s also kind of doomy.’ With COVID-19 and the fucked up state of America, has the record gotten darker in the last few months?
I think so, but we’ve never been a happy band. It’s not what feels right to us, or the kind of music we want to make. If we do something that sounds too happy, we know it and change it. It needs to be darker, and that’s where we want to live. I don’t mind listening to happy music, but over the years, Mastodon has been the place to put dark things. It’s corny to call it therapeutic, but the new stuff is almost hard to listen to because it’s so devastating. We lost our friend and manager Nick John in 2018 to pancreatic cancer, so a lot of the new record is for him. There’s been a lot of personal stuff that has transpired in the last year, all piled on top of the COVID stuff. I don’t know how any musician or artist could sidestep the state of the world right now.

When I listen to it, it’s not a fun romp by any stretch of the imagination. I’m not really selling it well, but it’s what we needed to get through. There is a moment that I feel will be the last song and the last thing you hear on the album. It’s a riff that sounds to me like driving off into the sunset, and leaving everything behind. It sounds hopeful to me. When I listen to music, I see little movies play in my head, and this riff brings a hopeful, cinematic vision to my mind. We’re driving towards something hopeful, away from devastation, death, and all that good stuff.

Looking back on 20 years: Could Mastodon have lasted if you weren’t good friends offstage?
I don’t think so. There’s got to be at least mutual respect for each other, and there has to be love there. We’ve been the same four people for 20 years, and that’s cool. I don’t think about it that often, as I’m really more focused on the present and what we’re currently working on. I was more impressed with the idea of 20 years when we first started out, and I knew that other bands were reaching that milestone. We were recording Leviathan in Seattle, and Melvins turned 20, and played an anniversary show at the Showbox Theater. We were like, “Holy shit! 20 years…that’s crazy.” Here I am, and I gotta tell ya: It feels the same.