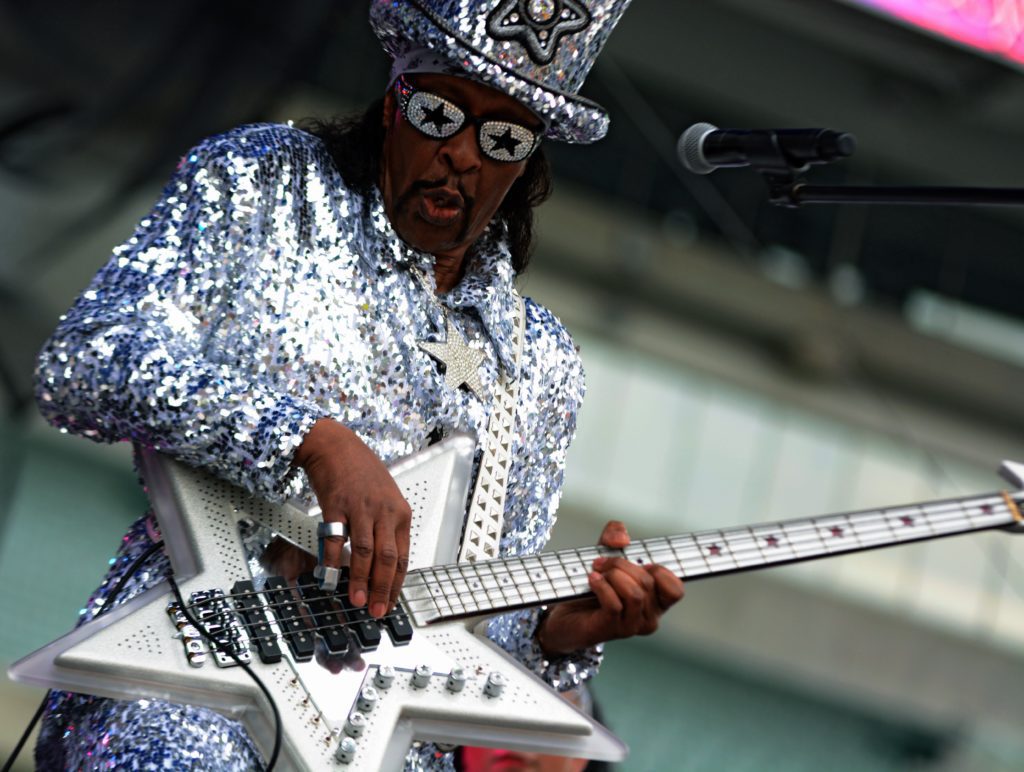 Bassmaster Bootsy Collins is known for living his life “on the one.” Looking back on his legacy as an intergalactic, P-Funk pioneer, it’s easy to imagine him on his own planet floating in a galaxy of groove. But you’d be wrong.

From his early days playing with James Brown to Parliament-Funkadelic and even his decades-long solo career, Collins always finds a way to attract talented musicians into his orbit. Even in a pandemic, he’s never stopped being Bootsy. With COVID-19 taking lives all over the world, the legendary musician and producer did his part to remind people through his music that even in quarantine we’re still able to come together as one nation under a groove.

“We better come together, there’s a new world coming, the norm is out the window, there ain’t no more norm we gotta make it what it is,” Collins tells SPIN over the phone. “And this ‘Stars’ record is part of that phase.”

The melding of artistry from young vocalist EmiSunshine’s vibrant Nashville twang to the wise words of Dr. West over the music of Sunshine cuts to the heart of the message of unity inspired by the chorus “Brothers and sisters, all colors–this thing can’t last forever, we gotta forge a better way.” It was something Collins knew he was going for when he began searching out musicians for the track as an aside during the recording of his forthcoming album, aptly titled Power of the One (which is out on Oct. 23).

“I said to myself this would be an interesting couple here, an old OG and EmiSunshine singing, that alone should open eyes like c’mon y’all is this really so hard to understand?” Collins says. “That to me is what the world needs, we don’t just need to see that, we need to be that. Not just music together but making everything together.”

To Collins, funk is just a shorthand term for making something out of nothing. Since making his first four-string by putting some thick bass strings on the body of an electric guitar, Collins knew how to get creative. It was a scrappiness that led him to become a bassist for James Brown — who admired his skill (but demanded he get a real bass).

“James Brown said son you can’t come on my stage with that thing,” Collins recalls. “That was a lesson for me that I ain’t gonna let nothing stop me from what I want or what I feel I need to do.” The rest, obviously, is history.

Yet with each new song he writes, it’s about collaboration, mixing old wisdom with new blood to make music embraced beyond his generation. Finding new musicians, especially now in the middle of a pandemic, has been tough at times, but Collins says working with new artists is still a thrill.

“It don’t matter what the instrument is or what instrument you are as long as you’re gettin’ down for the funk of it,” Collins says. “When I see that it excites me it gets me excited like when I was coming up with James [Brown] and with George [Clinton], if that’s gonna push me to keep this thing exciting then it‘s exciting for them and it’s exciting for me and to me that’s a win-win.”

This time in history has definitely taught musicians a lot about themselves. Between the recent pandemic and the current explosion of protests of the Black Lives Matter movement following the murder of George Floyd, songs like “Stars” remind us to not only be accountable to ourselves but to each other and embracing our differences and our basic similarities. One of those similarities Collins says is that we’re all born with the funk in us.

“As bad as things are it can actually get worse we need to put our heads together and start working together and stop fakin’ the funk! Let’s put out good things together that people and kids can really get involved with.” Collins says and breaks it down on the one in the most Bootsy way possible: “If you were born between an ass and a peehole you already know you funky…think about that.”