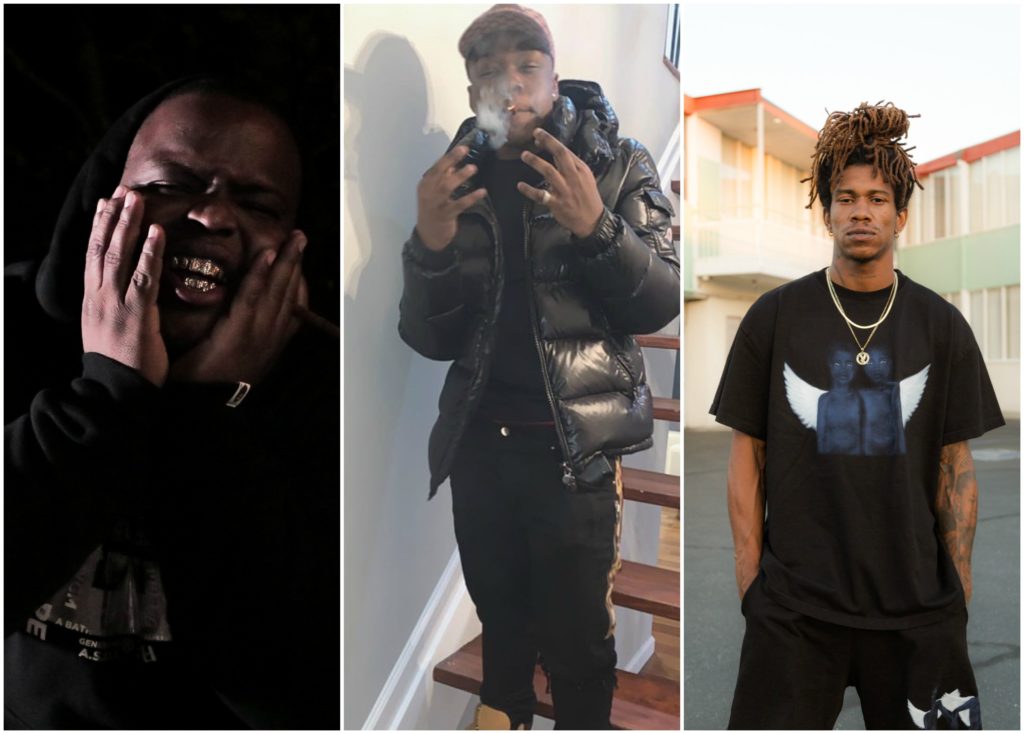 Ketchy the Great – “Another One”

If you need a microcosm for the racism of the U.S. justice system — or a case that illustrates the life-threatening discrimination rappers face with every lyric — see the nearly three-year judicial and carceral nightmare of Drakeo the Ruler and the Stinc Team. Drakeo was charged with benefiting from a murder he didn’t commit, and the Stinc Team was labeled a gang. While Drakeo fought his case and spent almost three years in prison, one of L.A.’s preeminent rap crews was tried for a variety of crimes and given absurdly punitive sentences ostensibly justified by California’s draconian gang enhancement laws. For spray painting graffiti in the “Right Decision” video, Ketchy the Great was charged with felony graffiti with a gang enhancement and intimidating a witness (via the graffiti) with a gang enhancement. He spent close to two years inside and took a 10-year plea deal.

Now, Ketchy is home sooner than expected, and no Stinc Team member remains incarcerated. “Another One” is Ketchy’s first single since his release. Rapping over a sparse, ominous, and slapping beat with dismal keys, Ketchy sounds both more assured and relaxed than before he went in. He experiments with a run-on cadence in his verses and drops a menacing hook undercut by cartoonish and exuberant adlibs. Back sipping mud, Ketchy’s driving a Beamer like it’s a bucket and denying any knowledge of who committed the homicide. Just as he was years ago, Ketchy remains one of L.A. street rap’s most promising talents. Ideally, he’s home is home indefinitely, no longer harassed by the police and free to realize that promise.

In June, Sacramento rapper Bris was killed at just 24 years old. He’d spent the three or so years before perfecting his jerky yet conversational flow, positioning himself to become the biggest rapper from the area since Mozzy. Mac J, one of Bris’s closest friends and collaborators, now carries the weight of his friend’s name. Though undoubtedly weighed down by grief, Mac’s doing an incredible job of continuing his rise and absorbing Bris’s momentum.

Already a respected regional talent, Mac J could go bar for bar with Bris. They released the joint 2019 tape Big Headed, and Bris said as much when, on their collaboration “Adios,” he rapped, “You know I fuck with Mac J because our mind equal.” In the wake of Bris’ tragic death, Mac J has released a series of increasingly excellent singles, each affirming Mac’s penchant for clever, borderline comedic punchlines. His delivery sounds both nonchalant and exasperated. You can hear his continued growth and all of the above on “ShoBoatin.” For most of the three minutes, Bris flexes and slides threatening punchlines over a squelching slap. He seems unfazed by anything, ready to continue his ascent alone. But just after the 30-second mark, he exposes his grief: “They saying it’s my time, I don’t want it / ‘Cause I can’t celebrate without my bro going.” Mac doesn’t dwell longer than that. Maybe it’s easier for him to focus on moving forward.

Few artists emerge fully-formed. There are usually demos or YouTube-only tracks, years of mixtapes and missteps before the first single takes off. Enter Fayetteville, North Carolina rapper/singer Morray. Outwardly, October’s “Quicksand” was his first single. Sentimental and inspirational with blues undertones, “Quicksand” covers all trap tropes with familiar diction (“Had beef on the streets, had to stay up / Betty Crocker showed me how to bake a cake, bruh”).  It succeeds because Morray strings together syllables so seamlessly, every half-rapped, half-sung line carrying great emotion. Few crooning rappers have his polish, resonance, and soul. At times, though, he sounds a little like Rod Wave with Roddy Ricch cadences (which were mostly Young Thug’s anyway).

Of course, Morray and “Quicksand” didn’t arrive in October. Morray released music before his manager, Moe Shalizi (Marshmello, Alesso), signed him. “Quicksand” was out, but they pulled it down, re-mixed and mastered it, and wiped most of Morray’s music from the internet (including a 2020 project called Eye Opener that will undoubtedly disappear soon). The revamped “Quicksand” now has over 1.6 million YouTube views in less than a month and co-signs from J. Cole and Rick Ross. Somehow, Morray also now has over 450,000 monthly Spotify listeners. I don’t smell the fertilizer I did with industry plants like Raury and RMR, but the latter figure seems steep at this juncture.

“Switched Up” is Morray’s latest (ostensibly second) single. It’s an affecting and painful chronicle of betrayal, the hook a masterclass in moving from surface-level universals to emotive specifics: “You ain’t my dawg, you ain’t my blood, you ain’t my brother / You let them niggas talk about me, you said nothing / Can’t talk about it, it’s too late for a discussion / ‘Member it was me who pulled out and started busting.” Here Morray’s voice is raspier, rawer than on “Quicksand.” There are shades of Cee-Lo circa Goodie Mob and notes that reflect Morray’s days in the church choir. Clearly, all of the work Morray did before this rebranded run has paid dividends. “Switched Up” and “Quicksand” are hits. The view and listener counts are only going up from here.

Brooklyn drill beats are big. A chest-caving amalgam of grim Chicago drill and the woozy, sliding low-end of UK grime, the production practically necessitates a voice as deep and thunderous. For instance, syllables from the late Pop Smoke boomed with the force of 808’s mixed to shift tectonic plates. Rocko Ballin sits on the other end of the spectrum, the 18-year-old’s light auto-tuned croon floating between and above every skull-cracking drum. I’ve had his single “Mob,” which now boasts nearly 500K Youtube views, embedded in my brain since February. In a partly mumbled cadence that sounds natural rather than affected, he tells you that the squad is on the way up, keeping the circle tight, and riding on the opposition. A Lau’s rock-tinged beat bangs, but “Mob” is unforgettable because of Rocko’s delivery. He extends vowels in the middle and at the end of words, never firmly landing on consonants and floating into the next vocal run. If he had major label backing, “Mob” would be everywhere.

Rocko followed “Mob” with a string of promising singles that explored new cadences, usually over more A Lau beats. “Wanna Know” — one of two November Rocko singles — wasn’t produced by A Lau. Still, it has the same potency. Rocko sounds more assured than he did back in February, more purposeful in where and when he elongates his words. He’s also improved lyrically. We get a better glimpse of Rocko’s life: he’s smoking in the studio with a Ruger tucked while his mother is calling to ask about his future plans. When you could be one of the next stars of Brooklyn drill, what do you tell mom? I imagine Rocko will answer with more music (and maybe a tape with A Lau).

Long Beach is full of untapped talent. Sometimes, it seems as if labels stopped looking in the 562 after Snoop stalked the roof of World Famous VIP Records. If they were paying attention, someone would’ve signed Seafood Sam when he emerged with fellow LB native Huey Briss as the duo Rules Follow Us in 2015. Over the last year, Sam has continued his campaign as one of LB’s most overlooked. 2019’s Dior Velour preceded 2020’s Backwards Skate Only, an alternately funky and smooth album that found Seafood stepping out in skates, gators, and house shoes. If you want to know what it’s like to mack and grind as a burgeoning rapper in LB, Backwards Skate Only is a documentary. Both in content and production (e.g., the modern funk of “Mekhi Fiber”), the album is refreshingly far removed from the majority of rap in LA County (which includes LB).

“Hood Vogue” is one of the singles from Sam’s latest project, the five-track Elroy EP he dropped at the end of October. Like the rest of the EP, which finds Sam rapping in smooth and unhurried cadences over lush lounge jazz and soul, “Hood Vogue” sounds like nothing else in the city. As he details rolling up, rolling around bumping Miles Davis, and picking up his homie from prison, Sam’s flow and understated lyricism almost seem forged on the East Coast: “I was born in the basement, way below the pavement / Could never let it slide when a nigga try and say shit.” Then he reminds you that everything he’s talking about is “real Long Beach shit.” In due time, I think many people will know what that means for Sam. And maybe a decades-old shadow will no longer obscure this generation of LB rappers.