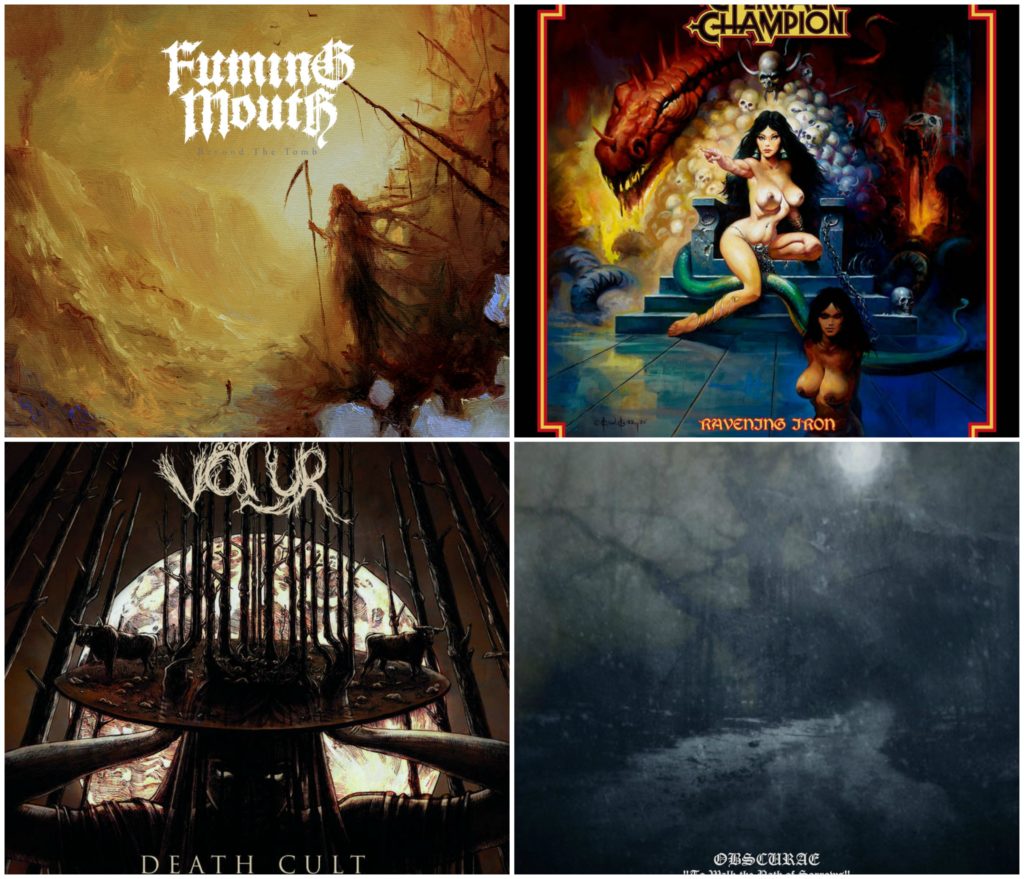 Welcome to the first edition of Blast rites! Every month, we’ll find the shreddest, the grimmest, the doomiest, the thrashiest, the most wacked out, the most metal metal out there. Hot albums, hot tracks, hot whatever – we only bring the most hellish heat.

The first thing you hear on Ravening Iron, the second record from Eternal Champion, is vocalist Jason Tarpey banging hammer to anvil, kicking off “A Face in the Glare.” Literal metal on metal. And when he hits that Tom G. Warrior “OOGH!” moments later, part-time play-warriors throw their plastic swords into their Kia Souls and disperse defeated. If you ain’t banging, you ain’t hanging. And you gotta bang or else: Eternal Champion have really tightened up, delivering sharp, catchy trad metal BIG and not bloated. Arthur Rizk, a wizard behind the boards, whips through melodic power-thrash (“War at the Edge of the End” and the title track), archaic doom (“Banners of Arhai” and “Coward’s Keep”), and galloping NWOBHM that bests the Brits (“Worms of the Earth”), cementing his status as a master of bringing new life to old styles. Not to mention he takes on drums and synths as well. Tarpey, also the singer of Texas legends Iron Age, has really grown into his power metal highs; his thundering command in “Face” and “Worms” in particular ask if pride is actually a sin. Together, Rizk and Tarpey a metal Savage Mode: formidable on their own, totally lethal combined. (That is not to undercut guitarist John Powers and bassist Brad Raub, who also play in Rizk’s equally amazing Sumerlands.)

Iron feels even more like a triumph given a year where Texas metal lost two of its guiding stars, Power Trip’s Riley Gale and Iron Age guitarist Wade Allison (who also played on Eternal Champion’s 2013 demo). Combined with a slew of great Lone Star records (most notably Skeleton, one of SPIN’s 50 Best Rock Bands Right Now) that can’t be toured on, this has been a taxing year. Even with most of the band based in Philadelphia now, Tarpey’s presence puts Iron in league with Texas’ heaviest; location aside, this demands unfettered praise.

Toronto doom trio Völur return with Death Cult, another violin-driven jaunt through forests vast and thick. Though it’s not the first doom album with violin this year — goth stalwarts My Dying Bride put out The Ghost of Orion, their best record in years, just before COVID hit — it is the only album where violin is the lead. Laura Bates can glide and swell where guitarists can’t, bringing a more nimble electricity when she and bassist Lucas Gadke riff and plod. “Inviolate Grove” has all of doom’s sweeping, broad strokes with Bates’ lightness undercutting throughout. It feels less of a distinctive clash between rhythm and lead than it does natural forces drifting where they need to drift, spiking when they need to spike, harmonizing through contrasts. When new drummer Justin Ruppel blasts in “Reverend Queen” like a theoretical audition for Napalm Death depends on it, Bates matches his chaos with a fleeting grace. Cult, given its name, does feel ritualistic, yet it’s more open and accessible than their previous works. Even as Bates shrieks in voice and hand in “Freyjan Death Cult,” the album remains enveloping and inviting, not intimidating. It resists an urge to unnecessarily drone and break just for the sake of breaking.

Obscurae – To Walk the Path of Sorrows (American Decline)

Chad Davis is mainly known for his long-running doom project Hour of 13, yet he’s had more than a few forays into black metal. Obscurae’s second album To Walk the Path of Sorrows is his latest black metal work, and its unrelenting coldness is what we need for times we don’t deserve. Davis conjures howling winds that whip against from all angles, and the endless blasting sounds like an AI programmed to replicate Mysticum’s hyper double bass that ends up developing its own killer consciousness. It is meant to be impenetrable and opaque – there is no clarity in Davis’ world because there is none in ours. Amidst the pummel, there are choral undertones, raising this beyond raw, Xeroxed slop and plunging it further into unreality. Does it feel endless? Absolutely. You find long, drifting ambient records hitting harder for most of the year? Same vibes. Sorrows is a record of no definite ends even when the silence hits at the end. You gotta huddle inside this winter for the benefit of your lungs and your community (and the detriment of your psyche), you may as well bring the blizzard indoors too.

Fuming Mouth – “Master of Extremity” (from Beyond the Tomb, Nuclear Blast/Triple B)

Speaking of impending lockdowns, Massachusetts death metal squadron Fuming Mouth’s new single “Master of Extremity,” from their upcoming Beyond the Tomb EP (out on Friday), may make social distancing and making sound decisions overall more difficult. It won’t make you take your grandparents out for brunch and tip a face-shield-clad waiter 10%, but it will make you want to throw hands at everyone within a six-foot radius. When it comes to Sweden-via-Godcity death metal, no one does it harder, and “Extremity” is their hardest song yet. Their downstroke slams and maxed-out, blown out Dismember distilling dig a deeper grave than before, celebrating brazen boneheaded aggression. Before live music was forced onto a stretcher, the last show I attended was Fuming Mouth opening for The Acacia Strain, Rotting Out, and Creeping Death. Heartening they came through when the pandemic still rages.