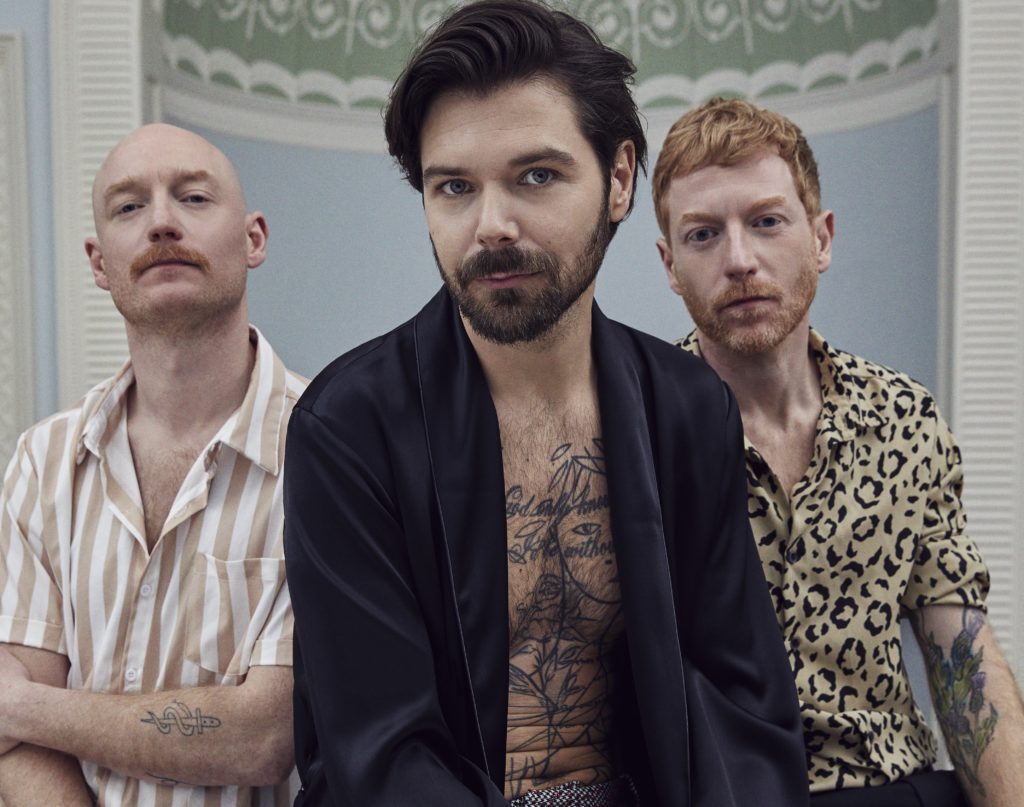 Affable, good-natured to a fault, the usually upbeat Scotsman Simon Neil reluctantly admits to feeling a tad flustered lately. There’s not much that can bring down this fun-loving frontman for chart-topping rock trio Biffy Clyro, but our current coronavirus crisis and the attendant lockdown has come damned close. He turned 40 last year, having endured several personal upheavals, but he’d spent two studious years composing the group’s reflective new A Celebration of Endings set, their ninth, and six months perfecting it in the studio.

“And then just as you’re about to reveal it to the world, the world makes other plans, saying No, you just can’t release this now,” Neil sighs over the phone while explaining the necessary postponement from spring. “And then not being able to bring it to life by taking it on the road? I really struggled with that for a few weeks.”

Gradually, he regained his composure by broadcasting wacky live sessions from home every Friday night, wherein he rocked outfits like camouflage sweats, gold lame trousers, and even thermal underwear and introduced to bracing new tracks “Instant History,” “Tiny Indoor Fireworks,” and the eerily prescient punk-metal pounders “Weird Leisure,” “End Of,” and “Worst Type of Best Possible.” Despite his fiery, sweat-drenched stage performances, Neil says, he’s a quiet introvert at heart, and he had to force himself to show off, alone in front of the camera. “So doing these weekly sessions was kind of my defense mechanism, and they really helped me regain my confidence.”

He wasn’t joking, however when he recently derisively referred to British Prime Minister Boris Johnson as a “heinous lump of beef,” and showed his support for the UK’s pandemic-besieged National Health System with a line of benefit merchandise that transmuted the group’s traditional ‘Mon the Biff’ mantra into ‘Mon the NHS!’ And he’s mad as hell, and he’s not going to take it anymore.

SPIN: So you actually called Boris a ‘heinous lump of beef’?
Simon Neil: Ha! Yeah, I think I did, actually. But then he caught [COVID-19] himself, and he was helped by non-British citizens at the NHS, but he was still going to make them pay their fee to work for the NHS. I mean, the level of decency these days is, uhh, somewhat different than when I was a teenager, or even in my fucking 20s. Do you feel the same over there in America? The level of what’s acceptable has just changed so much. For instance, the worst thing about Trump is, the impeachment thing just emboldened him — he actually just realized that he can get away with whatever the fuck he wants, and he’s surrounded by cowards that won’t ever say a thing to him. It’s ugly, just ugly. And the thing is, it shouldn’t even be about politics — this is a non-political situation.

What changes have you been going through?
On an inward and an outward-looking level, I definitely felt like finally, my inner confidence had properly taken root again. I mean, my work is so reliant on someone else’s opinion, on whether someone gives you a thumbs up or a thumbs down, which relegates your confidence to a pretty weird place. And over the past five years, there have been so many lies about Brexit, which have affected the futures of the next two generations in this country. All because of people refusing to tell the truth, people born with silver spoons in their mouths pretending that they know what it’s like to go out and work a daily job for a proper paycheck. And the things that I valued growing up — empathy, a sense of community, and just being honest?

I mean, five years later suddenly you have to explain to people why honesty and truth are virtues. And why empathy for your neighbor or helping a stranger are decent things to do. So I’ve just been kind of mad about the way that the world is going, and I decided to fight for what I cared about. I want to care for my friends and family, and only surround myself with people who I feel have a positive spirit, people who aspire to be better and for us to have a better society. That’s who I want to work with. And on our last album, we parted ways with a couple of people that we had been working with for about 20 years. And when that happened, I realized that I just don’t have time for that. And that’s how I feel about life now. I trust my instinct more, and if I don’t get a good vibe from someone or something, then I’m going to fucking jack it. Life is just too short.

My motto is, Everybody has an agenda, and it rarely includes you. With the corollary being You can actually fire your friends if need be.
I had that happen with a friend two weeks ago. Every single time I would see him, he would be sneaking behind my back or just taking things for granted.Then he was constantly texting me and apologizing for what he’d done, and I just had to phone him and say, “This never changes — it’s the same thing, time after time.” And I said goodbye. I felt liberated afterward, I felt my shoulders lift. And my shoulders had been down, because every time a call or a text came in from this guy, I wasn’t relaxed — I called it a ‘shudder text.’

You love great horror films. Have you — like many of us during Netflix lockdown — discovered the wonder of new Scream Queen Samara Weaving?
Ready or Not is just amazing. She’s found a really exceptional role as the new Scream Queen, and she’s really good at it. She’s got such charisma and pathos in what she does, and she always knows exactly what the script calls for. I loved her in The Babysitter, and I can’t wait to check out Mayhem. So yes, I’ve been seeing a lot of films.

Did you ever hear any comments from Boris Johnson?
No. To be honest, I think a lot of people are really mad at the government over here, so I’m not sure if I would make it onto his radar. I think he reads Horse & Hound!