Ethan “Whethan” Snoreck was just like any other kid – until he wasn’t.

A native of Chicago, Whethan split the seasons playing hockey and skateboarding. When he was 12, he started messing around with Apple’s GarageBand music production software on a family iPad. As his skills evolved, he upgraded to Ableton, a DAW program he’s loyal to today.

Sports became a thing of the past and he began releasing melodic, bass-driven electro-pop to SoundCloud. He took the name Wheathin and caught fire when a remix of MssingNo’s “Xe3″ went viral in the background of Vine videos. In 2015, he signed a remix deal with Australian taste-maker label Future Classic, marking him as the youngest producer Future Classic ever worked with. The 16-year-old was then contacted by Wheat Thins and told to change his name.

He graduated high school in 2017, but instead of prepping for college with his classmates, he was all in on electronic music. Snoreck left his senior year early to open for The Chainsmokers as they toured North America, only returning to Chicago to attend his graduation ceremony.

His song “High” with Dua Lipa was a hit from the Fifty Shades Freed soundtrack, and Tom Morello tapped him to produce “Every Step That I Take” on the guitar legend’s 2018 collaborative LP The Atlas Underground. That same year, Snoreck set out on his own headline tour across the United States in support of his fresh, feel-good Life of a Wallflower Vol. 1 EP.

This May, Snoreck will finally turn 21, making him old enough to patron the clubs he’s played for half a decade. What better way to celebrate than with the release of his debut album?

“I didn’t rush it,” Snoreck said of the impending release. “I worked on plenty of music over the past couple of years to put out an album, but I’ve wanted to wait until I had this crazy collection of songs that does feel like me but also feels like the future.”

He’s chosen Fantasy as its title, a fitting name for a guy who’s life has so far been a dream come true. It’s a word he’s always loved in sound and meaning, but it also captures the project’s free-form approach to style and mood.

“I think music listeners and people in this day and age are ready for dramatic switch-ups and just different things,” Snoreck says. “[Fantasy] is so kaleidoscopic in sound and explosive almost. There’s this weird energy that just takes me to this place. I feel like everyone’s gonna feel differently, and it’s going to take them to their own individual place. It’s its own world.”

Fantasy’s first single was a dreamy guitar-driven collab with Strfkr called “Stay Forever.” Snoreck is a long-time fan of the group’s synth-pop psychedelia, and a chance to work on its new album led to a close friendship with creative kingpin Joshua Hodges.

“That song instantly … felt like the perfect sound and direction,” Snoreck says. “It almost feels like a Western guitar and then all these lush, synth-wavy synths. That’s where my mind’s been, and that was a great collaboration, one on my checklist that I’ve been dying to do forever.”

“All In My Head” is the second single, released earlier this month. It shifts toward upbeat, punk-fueled abandon with vocals from Canadian-American singer Grandson that drip with the kind of angst-ridden boredom that makes suburban kids knock over signs at the mall. It’ll be followed by a third single alongside “Tongue Tied” rockers Grouplove, which is out this Friday.

“It was an honor to work with them, and it’s one of my favorite songs on the album,” Snoreck says, admitting that the LP could have been named Fantasy just for the sheer number of special guests.

“I sat [with this album] for a long time,” he said. “As cheesy as it sounds, it’s such an emotional rollercoaster … A lot of these songs, [I let] time do its thing to see if I still liked it a month or two later. So far this album has stood the test of time for me.”

Fantasy is due out this spring on Atlantic Records. Check the Fantasy pop-up tour dates and listen to “All In My Head” with Grandson below. 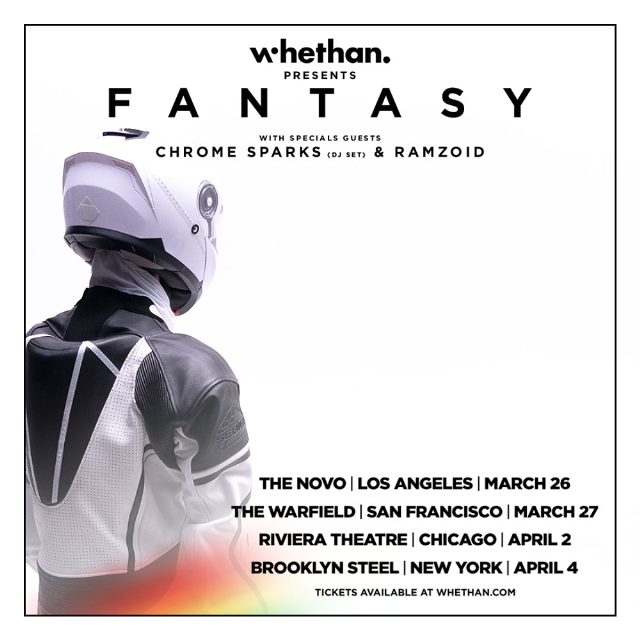